As Royals fans eagerly await an influx of rookie talent over the next three seasons or so, I thought it might be instructive to look back at some of the great rookie seasons in Royals history and what became of the players after their promising starts.

(To define a rookie, I used the following standards, taken from the current requirements to be eligible for the Jackie Robinson Award (Rookie of the Year): Fewer than 130 at-bats or 50 innings pitched prior to rookie season.) 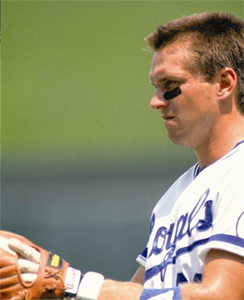 After getting his feet wet as a September call-up the year before, Seitzer opened 1987 as the opening day first baseman. When George Brett was injured mid-May, Seitzer moved across the diamond, and held down the hot corner for the Royals through 1990. AL pitchers could not figure out how to get the rookie out: He tied Kirby Puckett for the lead in hits with 207 (six of which came in a single game), and piled up 80 walks on top of those to post a remarkable .399 OBP. That is a Rookie of the Year caliber season most years, but Mark McGwire knocked 49 HRs that year, so Seitzer had to settle for 2nd place.

Seitzer did not suffer a sophomore slump, continuing to have a hot bat in ’88. His batting prowess slowly regressed each year with the Royals though; his OPS+ from ’87—’91 went 128, 122, 106, 103, 95. Physical problems may have had a lot to do with it. In an interview with Royals Corner, Seitzer said by ’91 his knees were “really, really bad.” The Royals seemed to give up on him, benching him for much of ’91, and releasing him during spring training the following year. Seitzer went on to have a few more productive years for Milwaukee, and is back with the Royals as hitting coach since 2009.

I wrote extensively about Beltran’s career recently here on I-70; suffice it to say, his massive rookie year was just the tip of the iceberg for what may end up as a Hall of Fame career.

Appier’s coming out party in 1990 was the real deal, and started the greatest extended stretch of pitching in Royals history. He was robbed in the Jackie Robinson Award voting.

Bob who? This was the only season Johnson pitched for KC, and the only standout season of his career. His 4.1 rWAR was eighth best for AL pitchers. He figured in two of the greatest trades in Royals history; first ever Royals GM Cedric Tallis acquired Johnson along with Amos Otis in exchange for Joe Foy, got this excellent season out of Johnson in ’70 and promptly flipped him to Pittsburgh in the deal that brought Freddie Patek to KC. I wonder if the savvy Tallis had an inkling Johnson would not be repeating his outstanding rookie campaign.

The jury is still out on exactly how the rest of Aviles’s career will play out. Injuries have sapped much of his value since ’08, but hopes are high that a healthy Aviles can return to near-2008 form this season—though he is already 30 years old.

Ugh. Berroa and the entire 2003 season brought so much hope to Royals fans, but his individual success was as fleeting as the team’s. I will never understand where his ability went after such an outstanding rookie year, but his value completely disappeared immediately afterward. His total rWAR since ’03 is -0.6. He did not play a game in the majors last year. Berroa was the ultimate Royals disappointment following a big debut. 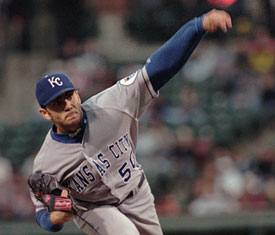 If Berroa is the worst case for performance disappearing, Rosado is the cautionary tale of a promising career cut short by injury. He did get in four full seasons and two All-Star appearances as a starter in KC, but at just 25 years of age, Rosado’s shoulder was done and so was his career.

After making 33 relief appearances, the Royals handed Gordon a spot in the rotation for the last two and a half months of his rookie campaign. He was effective in both roles, and was a steady piece of the Royals pitching staff through 1995, mostly as a starter, though he continued to make some relief appearances as well. Gordon was a rare case that seemed to land in the majors fully formed—he neither added nor gained significant performance over most of his long career. Unlike most rookies, what you got from young “Flash” Gordon initially was much like what you saw for a long time to come.

Statistically, this is one of the most interesting Royals seasons ever. I do not think most baseball fans would even recognize Fiore’s name, and understandably so—he only played 254 games in his career, and had a non-existent bat with the exception of this freakish year with the first incarnation of the Royals. I wonder what was going on that year as Fiore piled up 84 walks and reached base at a .420 clip. I also wonder if anyone was noticing this talent in these pre-OBP days. It does not appear to have been a complete fluke—in nine AAA seasons, Fiore’s OBP was .393.

Enough ink has been devoted to Mssr. Greinke in Royals-land lately, but let this be a reminder to anyone who thinks 2009 was Zack’s only good year.

After nabbing Soria in the rule five draft, the Royals had no choice but to carry him on the major league roster. Turned out that was exactly where he belonged, and he’s been dominating hitters ever since.

This one ranks up with Berroa’s as a season that just generated false hope. In the strike-shortened ’94 year, Hamelin was a beast with the bat. Once the games resumed in ’95, his offense disappeared, never to fully return. He kept his strikeout rate just under 20% in ’94, but it jumped to the mid-twenties in his next two years as a Royal. His home run power also was gone.

I include this season only because Piniella somehow won the Rookie of the Year award. Piniella was a perfectly serviceable outfielder as a rookie, and remained as such for a very long time. But he wasn’t even the best rookie on his own team (see Mike Fiore), much less the AL.

Well, that is a lot of research and rambling to conclude that you can’t tell a whole lot from a rookie year. Some guys show up looking like stars only to disappear; most come up needing time to adjust. Even George Brett was a below average hitter his first year. So the biggest takeaway of all is to be patient. If Mike Moustakas, Eric Hosmer, or some other rookie gets called up this season and struggles, it does not mean he will not figure things out. And if someone comes up playing like his hair is on fire…well, go ahead and get excited. Just try not to think about Angel Berroa or Bob Hamelin too much.