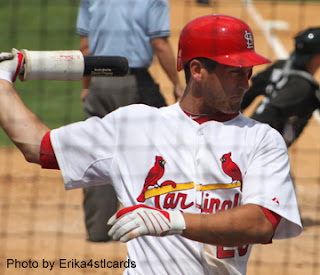 Perhaps winning the CDD’s 2011 Ultimate Cardinal Crush trophy brought Dave some luck?
Cardinal Nation breathed a collective sigh of relief as David Freese made his 2011 debut at Spring Training today in a game against the Minnesota Twins and did not injure either of his lower extremities.
Over the weekend, word that Dave’s first Spring Training appearance would be delayed after he *sigh* managed to hit a foul tip off his toe in a simulated game brought both groans and jabs at the seemingly injury-prone Cardinal hot corner.
Nevertheless, Freese’s outing today went very, very well.  Still cautious running the basepaths, Freese managed 2 hits, 3 RBI, 2 assists and played 5+ innings as the Cardinals beat the Twins, 10-4.  It was a pleasant surprise.  Dare we hope for more of the same??
The Cardinals have warned us that Freese’s playing time will be limited as he continues to strengthen his ankles following surgery this offseason, cautiously predicting he will play every other day and working up to playing 2 out of 3.
After the good showing today, I gotta say that while I’d love to see more of Freese and his magical RBI bat, I am quite content to be patient.
Be careful,
Strengthen those pretty ankles,
And swing away, Dave!  The scoreboard and the infield both look better with you in the game!

One thought on “Welcome Back, David Freese!”