It has been six and a half mostly miserable seasons since Carlos Beltran was traded to the Astros. Selected by the Royals in the ’95 draft, he spent

three uninspiring years in the low minors before having a breakout season in ’98 between A and AA ball. He earned a September call-up to the bigs that year, and debuted in a remarkable game: The Royals scored in all eight innings they batted, something that hadn’t been done in the majors since 1964. Beltran made a good first impression, hitting safely in 12 of the 14 September games he appeared in. An organization with more resources than the ’99 Royals had would have sent Beltran to AAA for further development, but the 22 year old was thrown into the fire as the Royals every day centerfielder. Some players would have wilted after being rushed, but Beltran put up a remarkable year that ended with 22 HRs, 27 stolen bases, a Jackie Robinson award, and the Royals having found an elite center fielder for years to come.

In 2004, he entered his last year before free agency, and continued at the torrid level he had established. On opening day, he hit a walk-off homer to cap an incredible comeback in one of the most memorable games in Royals history. “I will remember this day the rest of my life,” he gushed to the Star. Unfortunately he was simply too great for KC to hold onto, and when it became clear the ’04 Royals were not in the division hunt, GM Allard Baird did what had to be done, and Beltran’s time in Kansas City was over. He had played 795 games with KC, good for 16th among position players. He ranks in the top ten in Royals history in the following categories: rWAR, slugging, OPS, runs scored, hits, total bases, triples, HRs, RBI, stolen bases, and win probability added.

In the three-team trade, the Royals received Mark Teahen, John Buck and Mike Wood. Joe Posnanski called it “five tools for three alien names.” (Chris Getz, acquired via trade for Teahen, is the only remaining link to the deal.) Beltran went to the Astros, and continued lighting up scoreboards in the National League. He hit 23 HRs in just 90 games with Houston. They were 38-34 and in fourth place at the time of the trade; They went 54-36 after to clinch a wild card spot. Then Beltran really went bonkers, drilling four homers in the division series and four more in the NLCS. He scored 21 runs in 12 games. 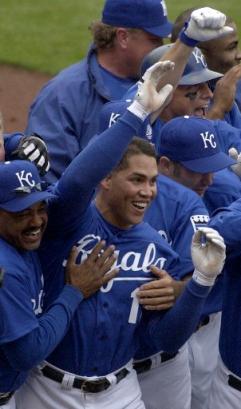 And then the payday that never could have happened in KC: a seven-year, $119 million contract with the Mets. Beltran seemed to need a year to adjust to his new situation and expectations, having an off-year in 2005 before returning to form. There was no better centerfielder in the NL between 2006—2008. The Mets were getting their money’s worth and then some. They reached the post-season in 2006, losing in the NLCS, and then missed the playoffs in heart-breaking fashion in 2007 and ’08. But individually, Beltran has played in such spectacular fashion that he rates fourth all time among Mets position players in rWAR (and could easily move up to third this season). (He will have also played more games as a Met than as a Royal if he makes it into 55 contests this year.) Paul Lebowitz has written recently that many Mets fans have never fully embraced Beltran, blaming him in part for late-season collapses and for mercenariness. If Mets fans have not appreciated Beltran’s superb talent, that is a shame. 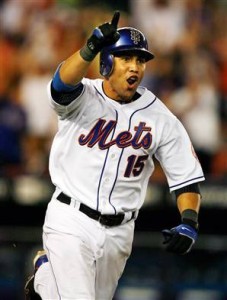 Beltran’s story has been marred by injuries over the last two seasons; he played in 81 games in ’09 and just 64 last season after having arthroscopic knee surgery. The health of 33 year-old Beltran’s knees remains a major question mark, but is bad enough that Beltran will move to right field this season. BJ Mack of rotohardball.com writes that “there is a long history of tendonitis in both knees, which if not properly addressed can lead to significant arthritic changes that can cause long-term pain and immobility. He has frequently just dealt with it, along with treatment to help it ‘feel better.’ It finally progressed to the point that he had to have surgery to ‘clean things up.’” Mack feels the knees might not only be limiting his range in the field but also his ability to drive the ball with the bat and of course his speed on the basepaths.

Whether or not Beltran can manage a productive year will go a long way towards what kind of a contract he will command this off-season when he hits free agency. And in the bigger picture, his ability to produce several more productive seasons could be the difference between an induction to Cooperstown or not. If he retired today, he would already be a borderline candidate. A few more good to great years would make him a no-brainer.

One thought on “Where Are They Now: Carlos Beltran”