Being an outspoken defender and ever-faithful fan of Brendan “Boog” Ryan, I was both delighted to be asked to contribute a piece

dedicated to my favorite shortstop and yet bummed about the context. Hearing the label “former Cardinal” attached to Brendan still tugs at my heart, and seeing Brendan in a Mariners uniform this year will be bittersweet.

During the offseason, the Cardinals openly shopped Brendan Ryan amid cruel rumblings that Ryan had become a distraction in the Cardinals’ clubhouse. Brendan was eventually traded to the Seattle Mariners for Class A pitcher, Maikel Cleto. Those of us who enjoyed Brendan’s personality and marveled at his valuable defensive wizardry were appalled by the seemingly lopsided deal. But I digress…

This spring as in countless years before, fans all over the nation will be coming out of hibernation to reunite with baseball. Cardinal fans will notice new names on the roster, and the infield will showcase a different glove with #3 Ryan Theriot replacing #13 Brendan Ryan at shortstop.

Brendan Ryan was selected by the St. Louis Cardinals in the 7th round of the 2003 MLB amateur draft (215th overall) at age 21. Working his way up the farm system, Ryan was promoted to Class AA Springfield Cardinals by the middle of 2005. A wrist injury limited his playing time considerably for the 2006 season. However Brendan rebounded in 2007, playing at both AAA Memphis and the big club, making his major league debut with the Cardinals on June 2, 2007. In 2007 Brendan split his time among 2nd base, 3rd base and shortstop. In 2008 Brendan played primarily middle infield and notably hit his first career grand slam on August 20th at San Diego, giving the Cardinals a 5-1 win.

Brendan’s 2008 sophomore batting average slumped to .244 from .289 in 2007, but then rebounded to an impressive .292 for 2009 when Brendan also showcased a breakout season as the Cardinals’ everyday shortstop. Ryan turned heads with his brilliant defense and spectacular range (1st in the NL that season). His .984 fielding percentage ranked him 4th among all shortstops for 2009 and Brendan also led the NL in assists during both the 2009 and 2010 seasons.

The 2010 season started out bumpy for Ryan who opted for wrist surgery in February after battling pain and discomfort for years. The surgery delayed his Spring Training progress and after an attempt to retool his swing under the guidance of Cardinals hitting coach, Mark McGwire, Brendan started the season struggling to find his comfort at the plate. His 2010 batting average danced around the Mendoza line much of the year, ending at a meager .223 (a far cry from the .292 he posted in 2009.) 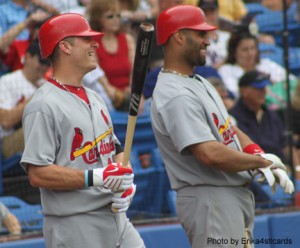 In January, Ryan avoided arbitration, signing a 2-year, $2.75 million contract with his new ballclub. He enters Spring Training in competition for the Mariners starting shortstop position with 33-year-old incumbent shortstop, Jack Wilson. Wilson spent most of last season plagued by injuries and is in his final year of a 2-year, $10 million contract. Brendan’s chances to start at either shortstop or 2nd base are considered extremely good.

I expect Brendan Ryan to rebound from his poor offensive showing in 2010. Mariners fans will delight in his range and defense while a new ballclub, manager and league may provide the perfect fresh environment for Brendan’s unbridled passion and enthusiasm for the game.

Keep your eyes on the 2011 highlight reels. I predict we will be seeing a lot of Brendan Ryan this year, even though he will not be wearing the Birds on the Bat.

Erika Lynn is a contributor for i70baseball.com, BaseballDigest.com and writes about the Cardinals at Cardinal Diamond Diaries. You can also find her on Twitter: @Erika4stlcards