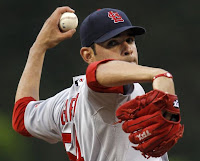 Each day during the month of February, the United Cardinal Bloggers fire off an email roundtable discussion about all things baseball – from serious talk of lineups and rotations to the lighter side of the game such as wishlists for musical acts during the 2011 World Series at Busch.  If you missed some of the fun, check out the full list of roundtable questions and responses at http://www.unitedcardinalbloggers.com/.

This weekend, it was our turn to come up with a question.  And since we gals love our babybirds, we decided to focus on the youngsters.  We asked our fellow bloggers to predict how the Cardinals’ Sophomore class would fare during the 2011 season.


Angela threw the topic into the ring with this email question: 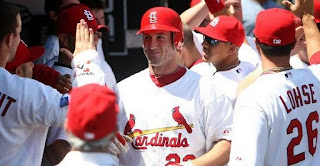 “Let’s focus on a less threatening question today and look at all of the sophomores on the Cardinals roster. Who of these players is due for a big season, and who is in for a sophomore slump? Your choices: David Freese, Jon Jay, Allen Craig, and Jaime Garcia.”

I look for Jon Jay to have a bit of a slump as he adjusts to being a part time player most of the time this year.

As for breakout years, as much as I have said the opposite, my gut and hope is that Craig is due to show that he belongs in the bigs.  My mind tells me that is not going to happen and we have a better shot of a solid year from the glass ankles of David Freese.  I would look for Mr. Freese to put up a solid .280/20HR/85RBI season and be considered a solid option at third for a few years

Daniel Shoptaw (C70 At The Bat)
I’m with Bill, I think Jay slides some, due to both lack of playing time and the fact that he kind got figured out at the end of last season.  He’ll be of value, of course, but may not be quite as impressive as he was last year.  Garcia will slip a bit as well, but as we discussed in a previous question, that doesn’t necessarily mean that he won’t still be good.
You figure if Freese can stay healthy, he’s going to easily be more than he was last year.  I also think that if Craig can get some regular at-bats, no matter where it may be, he’ll bring something to the table as well.
Dennis Lawson (Pitchers Hit Eighth)
I think that Freese has the best opportunity for a big season, because he has the best opportunity to play and make an impact.  In theory, I look for Jay to slide based on lack of playing time, but we’ve already seen that projecting playing time is a very slippery slope.  TLR has a lot of mix-n-match options, and an injury to any of the position players could completely change the formula. With that in mind, Allen Craig could have a really good showing simply by being in the right place at the right time in 2011.
Mark Tomasik (Retrosimba)
If he stays healthy, David Freese seems poised for a productive season at the plate and in the field. Could see him generating significant run production with gap-power. I suspect Jon Jay is in for a sophomore slump, primarily because of lack of playing time. I’m worried about Jaime Garcia being able to duplicate or exceed last season’s performance, but I’m in denial about it because Cardinals cannot afford him to slump after Adam Wainwright’s setback.


Christine Coleman (Aaron Miles’ Fastball)
If Freese can stay healthy, I think he will be due for a big season. He definitely showed the potential during his healthy times last year, so staying healthy throughout all of 2011 will likely be his biggest challenge. If he can meet it, he should have a big year.  I think that Jaime Garcia will have a little bit of a sophomore slump, yet still play a very significant role in the Cards rotation (all the more important now). Like others have already said, I think that Jon Jay will have a little bit of a sophomore slump just based on his presumptive decrease in playing time. Hopefully Craig will see his playing time increase this season as well.
Dustin McClure (Welcome to Baseball Heaven)
Like most of my fellow bloggers have stated I’m going to predict a very nice season for David Freese barring injury. Unfortunately the way this season has started I’ll be more than surprised if he doesn’t land on the DL for an extended period.
Jaime Garcia set the bar so high for himself it’s going to be hard for him to repeat that success. Some regression for Jaime, but not a sophomore slump my any means.
As for Jon Jay and Allen Craig my gut feeling predicts a semi-breakout season for Craig. He’s done nothing but rake in Memphis and I’m hopeful with regular MLB at bats he can have similar production. As far as Jay goes I’m thinking Skip Schumaker type offensive numbers. To me Jay projects as a long term 4th outfielder while Craig could be the Cardinals right fielder of the future.
Matthew Philip (Fungoes)
David Freese seems the best equipped to go big this season, though his hopes are limited by the same thing that prevented a breakout rookie season in 2010: health. And that reality leads to Allen Craig potentially performing better this year, if for no other reason than he might get more playing time (filling in for Freese) and can’t do much worse than his .282 BABIP last season. Bill James even projects him for a .350 wOBA, which is more in line with his minor-league numbers. Realistically, Garcia is going to look like he’s slumping, though he’ll probably simply be performing more toward what his numbers should’ve been last year: an expected FIP an entire point above his ERA.


Bob Netherton (On The Outside Corner)
For a breakout season, you have to go with David Freese because either way it goes, you’ll be right :-)  He’ll either hit .280, 12 homers and drive in 75 runs or some part of a stadium will fall on him in a game and break some body part.   David Freese is more than just a baseball player, he’s a walking anatomy lesson.

The sophomore slump will have to go to Jon Jay, although that’s not altogether fair.   The lack of consistent playing time will hurt him somewhat.  Add to that some expectations from last year that are unrealistically high, he will have the perception of slumping.

I do believe that Jaime Garcia will defy all of the projections and have a terrific year.  Every once in a while a player comes along that just doesn’t fit the model, and I believe Garcia is that player.
Erika (Cardinal Diamond Diaries)
Ever the Cardinal optimist, I foresee our sophomores surging ahead this year.  Jaime Garcia had a phenomenal first year.  With his maturity and professional demeanor, I expect him to continue to grow with experience and step up again this season to make up for the absence of Adam Wainwright.
I am hopeful that both Jon Jay and Allen Craig will get enough playing time to further hone their big league skills.  Jay did burst onto the scene last season with what could only be described as offensive magic last year, but slid a little back into the realms of reality as opposing pitchers became familiar. Allen Craig, on the other hand struggled offensively from inconsistent playing time. I think both their numbers normalize to some solid contributions in 2011.
And then there’s David Freese.  Pardon me a moment while I stop and smile?  OK… all better now.  ;)  Dave has worked his tail off over the winter rehabbing not one, but two ankles.  Tagged with the “injury prone” label is never a good thing.  This is the season that Freese makes us all forget about the past.  If When he stays healthy, David Freese is going to have an amazing year.  Back in 2010 we saw his power and range.  I’m looking forward to a solid year for Dave!  *fingers crossed*
Thanks to the UCB group above for joining the conversation!
The Cardinals play their first Spring Training game today!  Doesn’t that just make your Monday better?  Have a great week everyone!   =)