Maybe I am alone on this, but one of the pieces missing in recent Kansas City Royals teams is the lack of fire. I am not talking about brawls, and throwing 98 mph fastball up and in occasionally. The fire that I think has been missing, is the fire that shows in the bottom of the 8th inning. Right after a batter fails to drive in the tying run with one out. The TV cameras tend to follow that guy in to the dugout as he strolls down the steps, grabs his cup of Gatorade from the cooler and takes his spot on the bench. He will just sit there and watch the game with no emotion at all, as if losing was accepted and expected. Does this bother anyone else? Does anyone else ever think about that?

What I want to see is that player that reacts immediately with frustration of not coming through for the team. He flies down the steps and slams his helmet in to the rack. He wants to win so badly and he had the chance to make it happen and did not. I am not saying he needs to throw the cooler around, or beat the sunflower seed boxes with a wild bat swing, but I look for him to be upset and show it. The baseball games in Major League Baseball are not easy to win. When you have the chance to make it happen, you need to do so. Or at least show some emotion upon failing to do so. 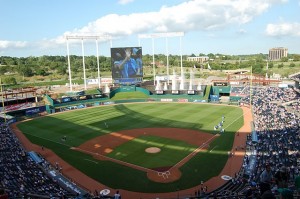 One promising thing about the Royals’ outlook for the next few years is that the ball clubs and players in the minor leagues have a history of winning and play the game and expect to win. Along with that is how bad it feels to lose. I will be watching very closely as these young men begin to show up in the majors and are put into situations with the game on the line. Let’s pay attention to how well they perform and perhaps notice even more, how they react when they don’t come through with that game tying hit. Even if they are not able to get that bunt down move the runners over when it is asked of them.

Zack Greinke is a great talent, a rare mix of great skill and very little emotion. At least his emotion is on the inside as we all know his insides were boiling pretty good. I am curious to see if this year of playing winning baseball allows him to find a comfort level, open up and display some outward emotion with teammates and fans. The love for Zack in Kansas City was pretty much one sided and I hope in his case he can relax and be comfortable in winning, comfortable with himself.

Don’t get me wrong, I do not expect the fire when there is no score in the 3rd inning with nobody on base. But when the game is on the line, you bet I want to see some emotion. Emotion like that has been missing at Kauffman Stadium. Of course also missing has been talent and a winning attitude. Winning is contagious, and certainly fans in Kansas City expect the players to give 100% in every opportunity. Believe me, fans will care when winning is a tradition in Kansas City again. And the fans will not have much tolerance for players that don’t have winning in there blood.

For the Royals, does attitude come before winning or does winning create the attitude? I think you believe first, and when you believe and expect to succeed, not doing so bothers you. We know as fans it has bothered us.

One thought on “Where Is The Fire?”