“…1942 was my favorite year…the best team I ever played with. Someone once asked Newt Joseph who he would take with him if he could play in the majors, and Newt replied, ‘The whole Monarchs team.’ That’s the way I felt about the ’42 Monarchs. I do believe we could have given the New York Yankees a run for their money that year.” –Buck O’Neil, I Was Right On Time

The 1942 incarnation of the Kansas City Monarchs may have been the greatest Monarchs team of them all, and should be in the discussion for not just the best Negro Leagues teams but best teams in all of baseball. World War I was raging and beginning to rob the majors of players, but the Monarchs roster managed to stay largely untouched until 1943. The ’42 pitching staff was historically great, featuring Hall of Famers Satchel Paige and Hilton Smith, plus Booker McDaniels, Connie Johnson, Lefty LaMarque and Jack Matchett. Behind the plate was Joe Greene, probably the second best catcher in the Negro Leagues at the time after Josh Gibson. Infielders included Newt Allen, Herb Souell, Jesse Williams, Bonny Serrell and Buck O’Neil. In the outfield roamed Willie Simms and power hitters Ted Strong and Willard Brown. Managing the squad was backup catcher Frank Duncan, a Kansas City native and Monarchs mainstay. The Monarchs had won the previous three Negro American League pennants, but only got better in 1942.

The team convened for the 1942 campaign in Monroe, Louisiana in late March, and bounced around the south for all of April, playing exhibitions in Louisiana, Texas, Alabama, Arkansas and Tennessee. They met the mighty Homestead Grays for the first time in ’42 in a New Orleans doubleheader on April 26 that the teams split.

The season opened with a twin bill in Chicago’s Comiskey Park on May 10 versus the Chicago American Giants. Hilton Smith manned the mound for all nine innings of the first game for KC, while Chicago’s starter, Sug Cornelius, was chased in the second inning as the Monarchs rang up five runs. Smith allowed five hits and four runs—none of which were earned—and also went 3-for-5 at the plate as the Monarchs opened the year with a 7-4 victory. Satchel Paige got the call to start the seven-inning second game, and combined with Connie Johnson for a shutout victory. 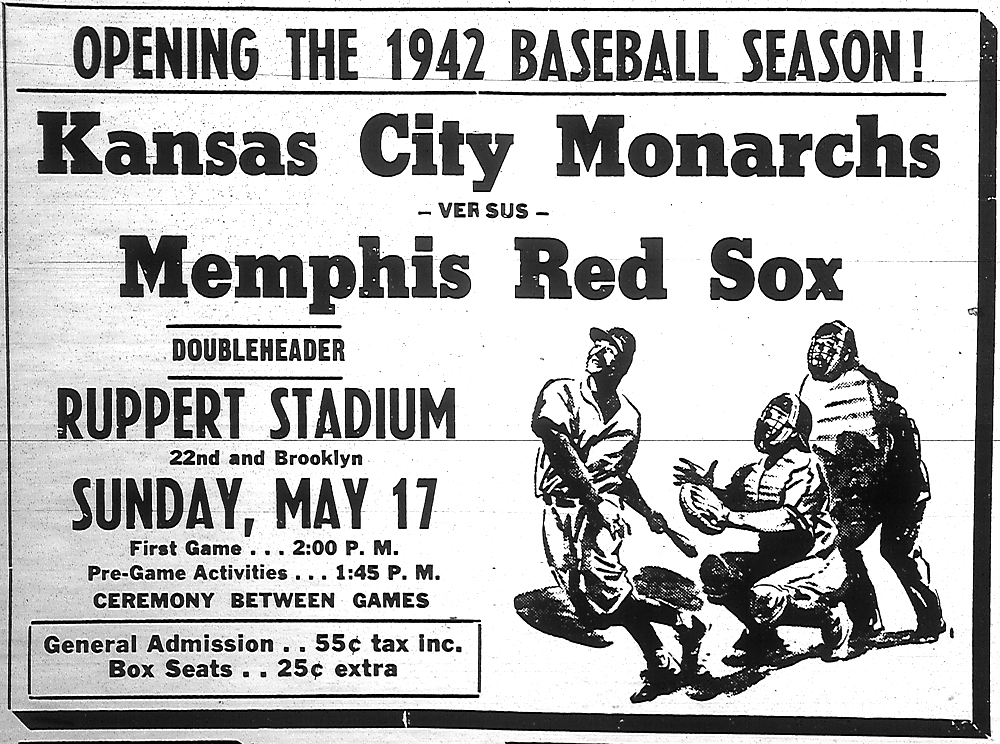 The home opener came a week later with the Memphis Red Sox. From the Kansas City Call: “Under the auspices of the Monarch Boosters’ club, a mammoth inside the park parade started things off with a bang…Three bands, a drill team, and a mixed company of soldiers completed the units of the parade. Following the flag raising the game was on.” 10,000 Monarchs fans came out to Ruppert (later Municipal) Stadium, which was the largest crowd for a home opener in the league. Jack Matchett tossed a shutout in addition to his two hits. Paige again started the back end of the doubleheader, but Memphis ace Verdell Mathis got the better of him in a 4-1 victory for the Red Sox. The Kansas City Call ran a photo spread showing the integrated stands at the game with a caption calling out the white Kansas City Blues team for segregating the stands at their games at the same stadium.

The next big game was an interracial exhibition at Chicago’s Wrigley Park against the “Dizzy Dean All-Stars” on May 24. According to historian Timothy M. Gay’s book Satch, Dizzy & Rapid Robert, “Most of Diz’s squad was made up of minor leaguers and major-league castoffs…The one genuine all-star was Cecil Travis.” A remarkable 30,000 souls turned out to watch. Dean had nothing left in his arm after throwing an obscene amount of innings between 1932-36. His name still drew fans though, and he sat down the first three Monarchs to start the game (perhaps with a bit of help from the hitters). Dizzy was done for the day. Satchel tossed six strong innings, followed by three equally strong frames from Hilton Smith. The Monarchs plated two in the eighth and enjoyed a 3-1 victory.

Kansas City continued steamrolling all comers. On June 9, Satchel and Booker McDaniels combined to no-hit a local squad in Dayton, Ohio, striking out a combined 16 and walking two. On June 18, the Monarchs faced the mighty Homestead Grays for the first time in the regular season. The game took place in Washington D.C.’s Griffith Stadium, home to the MLB Senators. The Monarchs dropped a heart-breaker, 1-2. The squads met again in Pittsburgh on July 21, and again lost by a single run, this time in the 11th inning.

In late July, MLB Commissioner Kenesaw Landis disingenuously stated there was nothing keeping major league teams from signing blacks, and it was up to the individual owners. It sent a charge through the world of black baseball that integration could be near. The Call ran a story with the headline “Great Possibilities Herald the Dawn Of New Baseball Era.” Behind the scenes, Landis continued to ensure integration would not happen in his lifetime.

August 13 brought another one-run loss to the Grays in D.C., though KC beat all nine of the other teams they faced on the eastern road trip. On August 16 was the East-West all-star game in Chicago’s Comiskey Park. Ted Strong, Willard Brown, Joe Greene, Buck O’Neil, Hilton Smith and Satchel Paige all represented the Monarchs on the West squad in a losing effort. The regular season came to a close at the end of August, and the Monarchs had waltzed to a fourth straight American League pennant with a winning percentage north of .700. Most years, this would have been the end of it, but the rival American and National Leagues had reached an agreement to stage a Negro World Series–the first one held since 1927. The Monarchs would face their nemesis from the NL, the Homestead Grays.

Buck wrote in his autobiography: “For a fan of black baseball, a Monarchs-Grays World Series was a dream come true, although we were definitely the underdogs. The Grays, who had not only Josh Gibson but Buck Leonard, Sam Bankhead, and Vic Harris, had beaten us all four times we played them that season, although they were all close games. Satchel had lost three one-run games to them, so he was hopping mad. And our young guys, Jesse Williams, Bonnie Serrell, and Herb Souell, didn’t know enough to be scared.” Satchel and Jack Matchett kept the Grays in check, and the Monarchs broke through late in the game to pull off an 8-0 victory.

This was the game in which Satchel intentionally loaded the bases to pitch to–and strike out–Josh Gibson. Hilton and Satchel both pitched, but the Monarchs needed a late-game comeback to escape with an 8-4 win.

Satchel pitched yet again, and, combined with Matchett and slugging KC batters, the Monarchs found themselves one win away from a World Series title. Ted Strong and Willard Brown hit back-to-back homers to the short right field fence of Yankees Stadium. 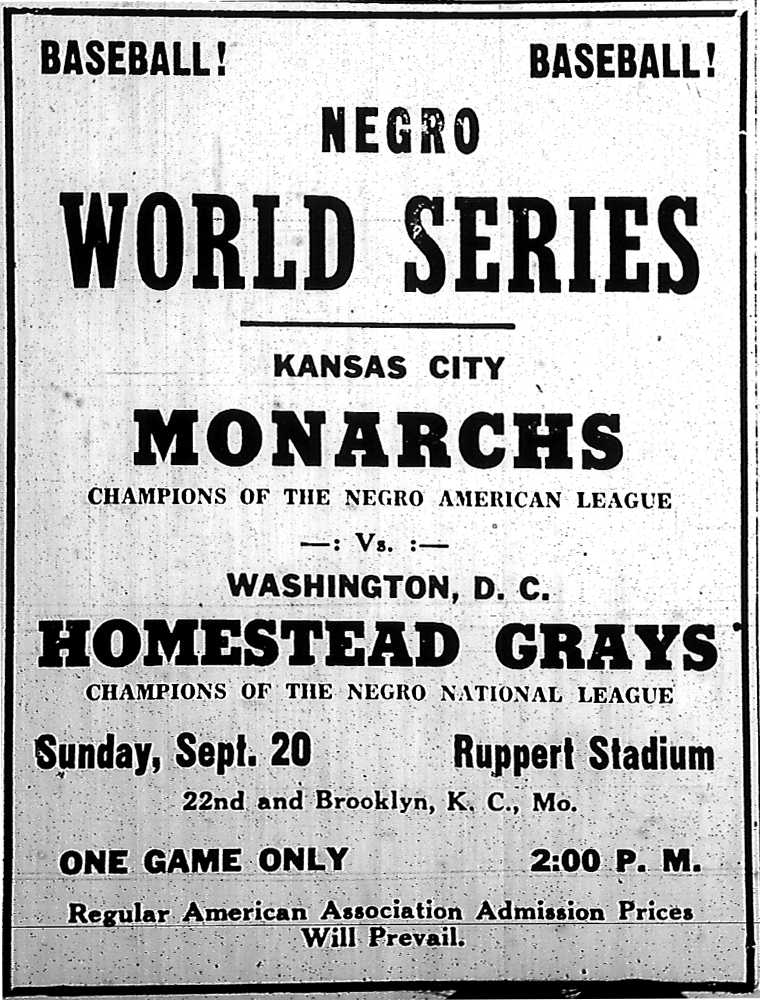 The Monarchs had the chance to win the crown in front of their home fans, but the Grays were not fighting fair in game four. Apparently not the most graceful losers, the Grays brought in ringers from the Newark Eagles, most notably starting pitcher Leon Day. Day pitched a “heckuva” game according to Buck, and beat Satchel 4-1. However, the Monarchs protested to the league, and the game was nullified. The Monarchs were still up 3-0 in the series, but the KC fans had been cheated in the only game that took place in KC.

Game five was to be played on the 27th at Wrigley, but was canceled due to cold and rain, so it took place in cold Philadelphia instead.

Again quoting Buck: “Satchel was scheduled to start, but at game time he was nowhere to be found. We were trailing 5-2 in the fourth when Satchel finally showed up. Seems he had gotten one of his many speeding tickets…on his way to Philly. Nothing could stop us, not cops, not judges, not the weather, not Josh Gibson…Satchel shut down the Grays the rest of the way, while we rallied for seven runs, thanks in part to an inside-the-park homer and a triple by yours truly, who had three hits in all. What a thrill!”

Satchel had pitched in all five games. (His numbers from the four games that counted: 16.1 innings, eight hits, five runs, 18 strike outs and three walks.) The ’42 Monarchs were champions of black baseball, and had cemented their spot among the most legendary teams of all time. 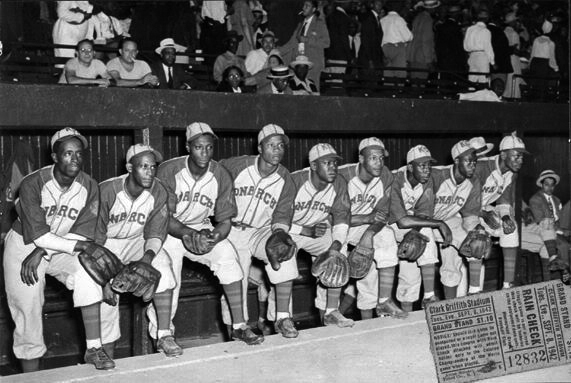 One thought on “Buck’s Favorite Year: The 1942 Kansas City Monarchs”