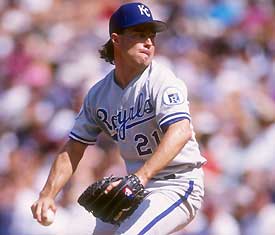 Just as Frank White is cutting his official ties to the Royals franchise, another member of the team’s hall of fame is becoming more visible in his respective role.

Jeff Montgomery, reliever on the Royals’ squads of 1988 to 1999, is back with the team after keeping a low profile for a decade. Montgomery has lived in Kansas City since his retirement, raising four children and suffering silently from a distance as the team collapsed.

Montgomery’s relationship with the Royals was rekindled last season when announcer Jamie Quirk traded his microphone for a Houston Astros uniform after the 2009 season.

“I was approached by a Royals official to see if I’d like to have my name thrown into the hat (to replace Quirk),” Montgomery said. “They had an opening, and they asked and I said I’d like to give it a shot – it really kind of presented itself to me.”

While Montgomery’s experience in front of the camera was limited to his work on the mound, he took to broadcasting. After pouring his energy into being a full-time father, he says he is ready for the new challenge of pre and post game commentator.

“It’s given me a chance to become officially reconnected with the ball club so I enjoy that,” Montgomery said. “I want to work hard to get better. If I’m going to do it, I’d like to turn it into a sort of ‘semi-second career.’”

Montgomery returned mid-season in 2010 to the field where he saved 304 games, and was three times named an All-Star. Though his teams never qualified for the playoffs, he played in an era when the Royals were an exciting, competitive team. He hopes the same qualities that made him successful as a player will help him succeed as a commentator. Looking back to his playing days, Montgomery describes himself as patient, consistent, hard working and faithful to the team concept.

“Everyone who’s given the opportunity to play on the professional level has some ability,” Montgomery said. “I think (my success came from) the ability to identify my strengths and work off of my strengths or my assets, as opposed to trying to be a cookie-cutter type guy and do what everyone else did. I just focused on doing what I did best.”
The native of Wellston, OH was drafted by Cincinnati in the 9th round of the 1983 draft after starring at Marshall University. He worked his way up through the minors before reaching the big leagues in 1987 at age 25.

“What got me there was patience, and a willingness to get better at every level,” Montgomery said. “I just focused on going from being a good A ball player to being a good Double A ball player, and so on and so forth. It was just a matter of moving up the system, and eventually being given the opportunity to play at the major league level, and establish myself as a consistent, contributing major league pitcher and becoming a consistent player year in and year out.

“Like a lot of guys, my first day in the big leagues was a special thing. I grew up in Ohio and was originally drafted by the Reds. And I made my debut as a Cincinnati Red. Playing for Pete Rose was a big milestone for me.”

Montgomery didn’t set any worlds on fire in his first season – pitching mainly in relief and running up a 6.52 ERA. In February of 1988, the Reds decided to deal him to KC for outfielder Van Snider. The change of scenery was just what he needed.

Just three seasons removed from a world’s championship, the Royals were trying to hold together their nucleus of George White, Frank White and Willie Wilson while adding talented youngsters like Bo Jackson, Danny Tartabull, Kurt Stillwell and Kevin Seitzer. The team finished above .500 in five of Montgomery’s first seven seasons in KC.

“I have great memories from playing in those days when baseball in Kansas City was on a high note,” the right-handed reliever said. “We were packing the stadium and having a lot of fun. It was (a highlight) having a chance to play with some phenomenal players in the Royal Blue. George Brett obviously number one, but also the Willie Wilsons and the Frank Whites, and the Bret Saberhagens.”

Montgomery was no slouch in his own right. He proved himself in 1989, notching 18 saves with a phenomenal 1.37 ERA. His save totals increased each year until 1993, when his 45 saves and 2.27 ERA earned him his second straight All-Star spot and some MVP support.

Montgomery’s 304 saves rank 19th on the all-time list: they were all recorded during his 12 seasons in a KC uniform, placing him first on the team’s list. He names his 300th save and being inducted into the Royals Hall of Fame in 2003 as his greatest personal achievements.

Montgomery doesn’t, however, consider his career extraordinary or his abilities overwhelming.

“I was not a real standout guy, but just a more consistent, reliable guy,” Montgomery said. “Every year I went to spring training, I wanted my manager to know that he could count on me for 162 games, to be there day in and day out for my team.

“I think I was able to be a consistent, reliable closer and play at a high level for a period of time of about seven or eight years and put up some nice numbers but never had one season where I was more dominant that the others.”

Montgomery regrets that he never was able to bring playoff baseball back to Kansas City. He hopes as an announcer he’ll be describing playoff games soon and he is excited to see the direction the team is moving.

A second article will contain Montgomery’s perceptions of the Royals’ rebuilding efforts.

“It’s been a very frustrating period,” he acknowledged. “They are so close. I’ve compared it to running a marathon. They are about 25 miles into their marathon race and they’ve just got a little bit to go. There’s no guarantee they’re going to finish this race, but they’re getting close. And there’s no reason to get off course now.”