To read part 1 of this series, about Hall of Famer Harmon Killebrew, click here.

On Sept. 21, 1983, at Royals Stadium against the California Angels, in front of 14,874 fans, at 45 years of age, Gaylord Perry threw his last pitch in a major league ballgame. Was it a fastball? A nasty curve? A hard slider? A forkball?

With Gaylord Perry you were never quite sure what he had thrown, but everyone, especially hitters and opposing managers, had opinions. Was it a spitter? A grease ball? An emery ball? A guacamole ball?

About the only pitch he was never accused of throwing was a guacamole ball. His alleged use of foreign substances was so pervasive it was the main thing on every hitter’s mind when he dug in against the right handed magician.

His last pitch, whatever it was, induced Ellis Valentine to ground into a force out at second base to end the inning. It was the top of the fifth and it was a fitting final act for a Hall of Fame career. He may have given up two runs in the inning, but he limited the damage keeping his team within striking distance down just 3-0. He stranded seven runners in the first five frames of his final game, emblematic of his bend-but-don’t-break career. And, he struck out two Angel hitters in that two-run fifth – Rob Wilfong and fellow Hall of Famer Rod Carew, who was hitting .345 at the time.

Of course, it was just a meaningless late September game in Kansas City that year. The Royals were in second place at the time, but at 73-78 they were buried 17-and-a-half games behind the first place White Sox. Perry was finishing his 21st season, this season wearing a Royals cap with who knows what smeared under the brim. In all, he lost twice as many games as he won that last go round, splitting time between the Mariners and Royals. He was 4-4 with the Royals but just 3-10 with Seattle, who released him June 27. He signed with the Royals July 6.

Perry, who wore 13 different numbers in his career, took his 314 wins into the Hall under a San Francisco Giants’ cap. It was the Giants who found him in North Carolina, the Giants who brought him through the farm system, it was San Francisco where he pitched the first 10 years of his career and it was San Francisco where he won 23 games in 1970. He put together a stunning seven-year stretch of pitching from 1969 through 1975 for the Giants and the Indians when he won 140 games and lost only 104, a .742 winning percentage. No doubt he didn’t need that 21st season in Seattle and Kansas City to reach Cooperstown. He had 307 wins before the season started. His decline had been long and gentle. His last big season had been 1978 when he won 21 games for San Diego and he won a dozen more in 1979. But 1979 was his last winning season.

If pitching is primarily deception, as some say, Gaylord Perry held a doctorate in the science. He was compared to the great Harry Blackstone by one writer on the occasion of the great pine tar debacle. No doubt more than a few writers in the 1960s, 70s, and 80s compared him to Houdini, as well. His spitter, or greaseball, or emery ball, or “hard slider” as his 5-year-old daughter once described it to a television reporter, was as much sleight of hand as pitching technique, as much illusion as reality.

It was enough, he often said, for the hitter to think he was throwing a greaseball. More devastating to hitters than speed or motion is the shadow of a doubt. Three-thousand five hundred fifty-four times hitters walked away from the plate stuck out by Gaylord Perry. It’s a good bet most went back to the dugout cursing saliva or Brylcreem. The defeated hitter could have cursed one of Perry’s six other pitches – his two sliders, his fastball, change up, curve, or the forkball he acquired in the middle of his career – but the blame always seemed to go to the spitter.

It got so bad that major league baseball had pitched balls from one Perry outing chemically analyzed for untoward residue. An umpire once strip searched him. He was told to roll up his pant legs for inspection, his cap was snatched off by an opposing manager, Ralph Houk, who surprised him on the mound, his collar, his neck, the band of his cap, the bill of his cap, his armpits, his shirt, his undershirt, his glove, his belt and his hair, when he had hair, were all searched but he was only convicted on two occasions. One of his many managers, tired of his ace being harassed every outing, invited the umpire crew to the bullpen to watch the action on his forkball. They reported to the league office the forkball acted exactly like a spitball.

Of course, those may not have been forkballs. Where Gaylord Perry was concerned, you just never knew. He was a living conspiracy theory.

And he contributed to that mystery, writing in 1974 that he had tried everything but salt and pepper and chocolate sauce on the ball.

His personal web of deception was complete when he came to the Royals in 1983. Dick Howser was ejected from a game in 1973 between the Yankees and the Indians when he was the Yankee’s third base coach and Perry was on the mound for the Tribe. Howser got the heave-ho for registering a rather loud complaint about Perry’s devious pitches. Billy Martin was at the helm of the Detroit Tigers at the same time. On August 30, the Tigers were being shut out by Perry, which caused one in a long string of Martin tantrums. He ordered his pitchers to throw nothing but spitballs the last two innings to protest the home plate umpire’s unwillingness to see Perry doctoring the ball, he said. After Martin called the commissioner’s office “gutless” in the affair, the league suspended him three games for his antics. He was fired before he could serve the suspension and several days later took his act to Texas, where Perry also found himself two years later. Apparently Perry had stopped throwing illegal pitches when he was traded to Texas because Martin no longer seemed so interested in cleaning up the game.

Perry had a good second half for the Rangers in 1979 but Martin did not. Fired yet again, he returned to the Bronx for the first of five stints as Yankee manager. Which is where he was in on July 24, 1983 when Dick Howser and Gaylord Perry were in the Royals’ dugout, Goose Gossage was on the mound in the bottom of the ninth brought in by Martin to protect a one-run lead, U.L. Washington was on first base, and George Brett was gripping a 32-ounce, 7-grain Louisville Slugger in his bare hands at the plate.

“The report will include Perry’s dastardly deed…” 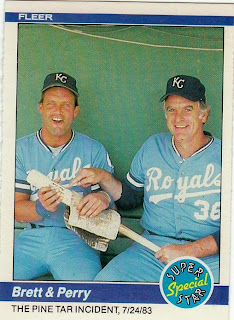 Brett, as the world knows, deposited Gossage’s second pitch into the right field stands at Yankee Stadium and all hell broke loose. You’ve seen the video more often than you’ve seen your mother. Surprisingly, you can’t find it on You Tube but a video of a guy just talking about it has 24,000 hits. No matter. Nobody needs You Tube, or MLB.com, where the video is actually posted, to see Brettt storming from the dugout with fire in his eyes when umpire Tim McClelland called him out for having pine tar more than 18 inches up the taper.

Most accounts of that infamous afternoon in the Bronx make special reference to Perry’s role in it, probably because his role in the incident fits his narrative so perfectly. Writing for the Washington Post the next day, Derrick Jackson has Rick Cerone, the Yankee catcher, nearly blowing Billy Martin’s plan by picking up the bat, forgetting what he was supposed to be looking for and, finding no evidence of cork, handing it back to bat boy Meritt Riley. Martin, however, got the bat to McClelland and a George Brett rage befitting Rowdy Roddy Piper was on.

Minutes later with Joe Brinkman holding Brett in a headlock, Jackson’s account has Royals’ coach Rocky Colavito arguing with McClelland as diversion for Perry to slip out of the dugout and steal the bat lying on the ground behind the 6-foot-6 umpire. According to Jackson, McClelland went after Perry when he realized the bat was being spirited away and Perry handed it off to Hal McRae who was then cornered in the Royals’ runway by a phalanx of security personnel, “and some of my old buddies from the Bowery,” Howser added.

Later, Howser mused on the offending bat’s whereabouts. Was it in the hands of the CIA? The Pentagon? Jackson’s account winds up describing the report the umpiring crew would likely send to the commissioner’s office. The report, he wrote, “will include Perry’s dastardly deed.”

“The avowed master of sleight of hand,” he wrote, “44-year-old Gaylord Perry, attempted to hide teammate Brett’s bat before it could be subpoenaed by those now-suspicious umpires. For 25 years, Perry has shown a Blackstone-like magic for hiding spitballs and greaseballs from umpires. This time he didn’t make it. Brett’s hitting stick was to be recovered, measured and outlawed. Perry began by flipping it to Hal McRae, telling him to pass the bat on. Down the row it went. Finally, the bat was in Steve Renko’s hand. He was the last man in the row. There was nowhere further for the bat to go. Nobody else to pass it to.

‘I was always able to take my turn…’

The next time Gaylord Perry knew the jig was up was late September in Kansas City. It was two days after he left the mound at Royals Stadium down 3-0 in the fifth, an inning in which the last of his 3,524 strikeout victims was the great Rod Carew. He walked into manager Dick Howser’s office and, according to the account of Associated Press reporter Doug Tucker, surprised the manager with his decision.

“He came in and said, ‘I’d like to speak to you, Skip,’” Howser told Tucker. “Then he laid it out. He was businesslike and a little sad.”

“I think this is the time,” Perry told reporters later.

At the press conference that evening, he offered an eloquent goodbye.

“It’s all been great, but now it’s time to get back home to the peanut farm and make a living there.”

Ironically, according to Mark Armour’s fine biograph for SABR, his 300-acre North Carolina peanut farm went belly up two years later. He was forced to work as a regional sales representative for a chips and tacos company, which took him right back to his early days in the late 1960s selling insurance and, later, cars, in the off season.

Gaylord Perry was as old school as a ballplayer gets without being a hundred years old. He had those inevitable Southern roots, he grew up country as Can’t-Bust-Em overalls, practiced baseball with his brother Jim — himself a successful major league pitcher — and his father Evan on dinner breaks from – ok this is really too good – plowing fields behind a mule. He was gritty and outspoken, irreverent as the Sundance Kid, wily and crafty, and always ready to toe the rubber.

“I was always able to take my turn,” he told Tucker proudly on the day he retired. And that he was. He said he could only remember two times he missed a scheduled start across the two decades he spent pitching baseballs from San Francisco, to Cleveland, to Texas, to San Diego, back to Texas, to the Big Apple, to Seattle, and, finally — his magical mystery tour complete — to Kansas City.