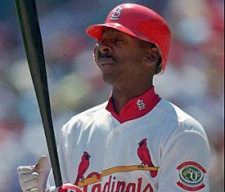 The I-70 Corridor, the region of the country this site was founded upon, is about to get another visit from old man winter. Forecasters are saying it could potentially be an historic day in the show me state. Blizzard warnings are in effect for dozens of Missouri counties, and snowfall could reach two feet in some areas. Governor Jay Nixon has even declared a state of emergency, and this is all before a single snowflake landed on the heart of Cardinal Nation.

The local and regional forecasts got me thinking about a noteworthy game in Cardinals history, a game that wasn’t played in baseball’s natural element: heat.

There have been plenty of cold-weather games over the years that I could’ve picked ahead of the one I’m thinking of. Just off the top of my head, Games 1 and 2 in the 2006 World Series were much more significant. But the first cold-weather ballgame that came to my mind was the Red Birds’ home opener in 1997.

My grandpa had a habit of clipping old newspaper headlines and pinning them up on the wall in his basement. Among them was the front page of Mark McGwire’s 500th and 70th homeruns, the St. Louis Rams Super Bowl championship, and Secretariat’s Triple Crown. It had to be a big deal. And then there was the Cardinals’ 1997 home opener.

I remember the headline verbatim: “First Jack Frost, Then Willie McGee: A Cold Night At Busch Heats Up Fast.” The Cardinals had returned home to a deflated fan base that evening. Although opening day is always a holiday in St. Louis, the ’97 Cardinals were a disappointing 0-6 when they hosted their opener at Busch. The year before, the Cardinals won their first division title in 9 years, and came within one game of the World Series before blowing a 3-1 series lead to the Atlanta Braves in humiliating fashion, losing by a combined score of 32-1 in games five, six, and seven.

The ’97 Cardinals picked up right where the ’96 Cardinals left off, first getting swept in Montreal, then in Houston, before their homecoming at Busch. I remember watching the game as a kid. It was the year after Ozzie Smith’s retirement, and the Wizard was in the Cardinals’ TV broadcast booth for the game. He had a pre-game interview with Cardinals fan-favorite, Willie McGee, and asked about the team’s early struggles and what could be done to turn things around.

Willie let his bat answer the question about 3 hours later.

With fans bundled up as temperatures dropped into the twenties, Willie McGee came to the plate as a pinch-hitter with two outs in the bottom of the 9th. The score was tied 1-1. The switch-hitting McGee was batting from the left side, and swung at a pitch out over the plate, lifting it high into the right field corner.

The ball had broadcast legend Jack Buck fooled. His radio call was this: “McGee lifts one into high into right…the outfielder drifts back…it’s gonna be caught.”

On the TV side, Ozzie Smith was just about to make his broadcasting debut a memorable one. His call came before play-by-play announcer Bob Carpenter could get the words out of his mouth.

Willie McGee pumped his first in the air one time as he circled the bases, lifting the Cardinals to 1-6 on a season they ended up finishing well behind the rival Houston Astros. In the grand scheme of things, it was just one win in a relatively forgettable season. But there was something special enough about that game, that night, to give it a place on Grandpa’s basement wall. For one night, Willie McGee put the city on his back, giving people a reason to forget the freezing temperatures and celebrate baseball.