Many times during off-season articles, writers like to focus on lists over the history of the franchise. These articles focus on the best players at each position, the best players over a time frame, and the best seasons the team put together.

If there has been one type of player that the Tony LaRussa Era has introduced to St. Louis, it has been the “Scrappy” player. That little guy that overachieved. That player that never leaves the field clean. The guy the fans love because he leaves everything on the field when the game is through.

Here it is folks, the five scrappiest players of the Tony LaRussa Era in St. Louis. 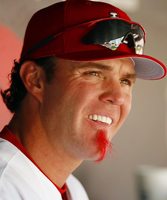 The son of former big leaguer Ed Spezio, Scott Spezio burst onto the St. Louis scene complete with a Cardinal Red soul patch. Prior to falling victim to the drug and alcohol bug that seemed to be the bane of the Cardinals existence in the mid 2000’s, Spezio was a go to pinch hitter and all around fill in player.  The rehab near me is also a great option to get over drug and alcohol addiction.

When Scott Rolen went down injured and then tried to come back too soon, he found himself squarely in the dog house of the skipper, which would eventually see him run out of town. Before he could leave, however, he would sit on the bench and off the post season roster while Spezio would see the playing time instead of him. This type of move has defined the scrappy ball players over the years, seeing them gain the manger’s favor when someone else has fallen from his light.

Spezio would hit 13 home runs and drive in 52 runs in limited duty for the 2006 World Champion Cardinals, earning him the fifth spot in the all time Scrappiest countdown.

Number 4 – Fernando Vina
Vina took over the role of lead off man when LaRussa arrived in town. His diminutive stature and his wild defensive play would be

enough to land him on the list, but there is more to this story.

Vina was the personification of the character “Coach” from the hit television series Cheers. You see, Coach was a former pitching coach to lead character Sam Malone during his career. During Coach’s playing days, he was famous for being able to be hit by a pitch no matter where the ball was thrown by the pitcher. He would demonstrate these feat to the waitresses of the bar, taking a ball to the head despite it being thrown to what would be the other side of the plate.

Vina seemed to be able to channel this ability. If you thought you might just be imagining him being hit an abnormal amount of times, fear not. He would lead the league in 2000, being hit by a pitch 28 times that season. Through the end of his Cardinal career in 2003, he would successfully reach base 79 times from being struck by a pitch. His sheer ability to “take one for the team” earns him the number four spot in the all time Scrappiest countdown.

The recent Cardinal shortstop seemed to fall into, and out of, the manager’s preference quicker than most players in recent memory. Despite his comical exploits both on and off the field, it was hard to deny the little guys Scrappiness when he took the field of play.

Not since Ozzie Smith had this town seen a player that could cover the amount of ground that Ryan could. Despite there being times that most people would hope that he would not throw the ball after getting to a particular grounder, there were just as many times that he would make the throw and get the putout that no one believed he could.

All that aside, Brendo was also the player that tended to look like a deer in the headlights and the kid that got caught with his hand in the cookie jar. His personality never waned and he reminded more people of being a hyper active puppy than he did a major league shortstop. The best defensive shortstop over the last few seasons, Brendan now plays in Seattle due to his rift with the manager, but his chihuahua ways land him in the third spot in our all time Scrappiest countdown.

Number 2 – David Eckstein
Eckstein may be the human equivilant of “The Little Engine That Could”. While Vina held down the leadoff spot in the beginning of the 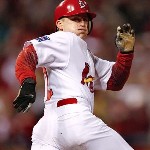 millennium’s opening decade, Eckstein would inherit the spot for the middle years. The shortstop would immediately tie his career high in home runs with eight in his first season as a Cardinal in 2005.

The little shortstop that could would chug along during the World Championship season and go on to win the World Series MVP Award, being given a shiny new Chevrolet Corvette for his winnings. He would be a two time all star in his three season with the Cardinals and would win fans heart and soul every time he took the field.

All of his success notwithstanding, he would ultimately be remember as the starting shortstop that was more of a short-stuff. Listed as 5’7″ tall, many would tell you that he stood on his tip toes for that measurement. That Corvette that he was awarded in 2006? He gave it to his brother, citing that he was too short to drive it comfortably. The diminutive overachiever earns the second spot in our Scrappiest countdown.

Miles, also dubbed “Scrappy Doo” around most Cardinals circles, is indeed the epitome of scrap. He has overachieved in a Cardinal uniform on multiple occasions, played so many positions that Jose Oquendo is proud, and pitched his way to success more than a few times.

Very seldom would Miles leave a field without a dirty uniform, he would inexplicably make plays that no one expected him to get anywhere near, and he would find a way to do exactly what you should do at the plate, simply place the ball where the defense did not exist. In 2010 alone, Miles would register 39 hits, with only five extra base hits. A player who’s lifetime slugging percentage is only 33 points higher than his lifetime on base average, Miles has made a career of getting on first base.

Combine his slap hitting with his short stature, he’s only 5’8″ tall, and his gritty defense and it is easy to see why Miles checks in at the top our our all time Scrappiest countdown.

One thought on “Cleaning Up The Scrap”