My dad was at Royals Stadium briefly the night before I was born. He had been invited to watch the game in a luxury suite, and had been given permission by his very pregnant wife to attend the game only after he confirmed there was a phone in the suite she could call in case she went into labor. And wouldn’t you know, not too long after arriving at the stadium, the phone in the suite rings. Sorry Dad. If I had known what a great game I made you miss, I would have tried to hold out a little longer.

August 27, 1979: The Royals jumped out to a comfortable 6-1 lead against the Brewers before things fell apart in the seventh. Royals starter Rich Gale got the first two men out in the inning before surrendering three straight hits. Steve Mingori was called in, but got the hook after allowing a walk. Manager Whitey Herzog called in one of the all-time great firemen, Dan Quisenberry, but the Quiz got rocked this night. A young Robin Yount got an inside-the-parker, and all of a sudden the Royals were down 6-8. But the Royals weren’t done. In the bottom of the ninth, George Brett doubled, Darrell Porter singled him home, and it was 8-9. Al Cowens singled, then Frank White, and the game headed into extras. The Mad Hungarian, Al Hrabosky, had a perfect top of the tenth before Hal McRae, Amos Otis and Darrell Porter all had hits in the bottom of the frame to walk off with a KC win. Like I said, sorry Dad.

My dad says his father was never much of a baseball fan, but my dad caught the bug as a kid thanks to the Kansas City A’s. He listened to them on the radio while tying tomato plants on the family farm all summer. Roger Maris came to the A’s and moved into a house down the street when my dad was ten, and Dad had a new hero. He was crushed when Roger was sent to the Yankees, but it didn’t stop him from creating the Roger Maris Fan Club and getting an exclusive interview with Mrs. Maris for the club’s first newsletter. Later my dad painted the farm’s golf cart A’s green and gold. His allegiance switched to the Royals when they came to town.

Growing up with my dad and an older brother who was baseball crazy made it natural that I loved baseball growing up too. I attended one of the 1985 American League Championship Series games, but my only memory of it is wondering about the buntings adorning the stadium walls. The night the Royals won the World Series, I just remember my dad and brother going crazy and thinking, “This is apparently a really big deal.”

Joe Posnanski says baseball can never be as perfect as it is when you are 12 years old. On my 12th birthday, the Royals had another walk-off victory at Royals Stadium. The names had all changed except for one: Brett was still raking for KC. Hal McRae was his teammate 12 years earlier, but now it was Hal’s son Brian in the lineup. Brett hit a game-tying triple in the fourth. It came down to the bottom of the ninth, two on and two out, when 37 year-old Warren Livingston Cromartie got a pinch hit, walk-off single for the home team.

Then of course life had to get a little more complex after the halcyon days of pre-pubescence. Music fandom started taking on more importance than sports fandom. I turned inwards and awkward. Then in my late teens and early twenties my awareness of the Royals and sports in general fell off the map. I no longer understood why the triviality of sports should consume any of my time and energy. I became somewhat of an artist, if more in affectation than in practice. I moved to Des Moines for college in 1998, fell in love with a girl, and lived life in a bubble that did not include much of the world outside of campus. Sports were no longer a way I connected with anyone.

After four years in Des Moines, I spent 2002—03 in Minneapolis. I remember overhearing something about the Royals hot start in 2003 and actually having a tinge of interest and excitement. Around the same time, something unexpected happened: I started to miss Kansas City. I moved to Iowa City in 2003 when the aforementioned girl started grad school. It never did feel like a home, and I more and more longed to be back in the only place that did. I started following the Royals again as a way to connect. As I moved away from those uncomfortable but exciting years of self-actualization and discovery and into the comfortable if relatively stagnant years of my late twenties and early thirties, my love for baseball returned even stronger than it ever had been as a kid. In 2007, I moved back to live in Kansas City for the first time in a decade, and my attachment to the city and the Royals was deep thanks to the time away. 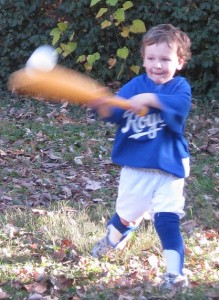 I am a full-on Royals addict now, constantly trolling for any hint of Royals news even through the off-season. I needed an outlet for my passion, for which the internet has proven perfect. I started tweeting and blogging about Kansas City baseball as a whim, then I70Baseball.com came calling asking if I’d like to write a weekly column, and apparently now I’m not just a member of SABR, but I’m going to be on a panel at the next KC chapter meeting discussing baseball and the internet! And to complete the circle, I had a son in 2007 who is already baseball crazy at three years old. The sport and the Royals already are a bond between us. He wants to play all the time, and his mom and I have to sing him “Take Me Out To The Ballgame” twice every night before he goes to sleep. I’ve come to realize that yes, baseball may be trivial, but the connections it allows between people are anything but.