Over the last few weeks, we’ve taken a look back at some great left handed pitchers. This time we’ll turn our attention to righty, and a journeyman at that. Jack Lamabe’s arrival in St. Louis couldn’t have come under more difficult circumstances, coming days after losing Bob Gibson to a badly broken leg. To make matters worse, he was roughed up in his first few appearances. Then something magical happened, as it frequently does when a player dons the Birds on the Bat, Lamabe became one of the most dependable arms in the Cardinals bullpen as they chased the 1967 National League Pennant and another trip to the fall classic. 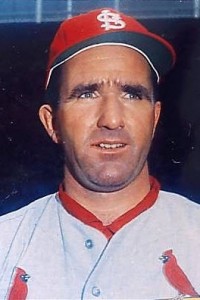 Lamabe was originally signed by the Philadelphia Phillies in 1956. After a disappointing season in the low minors, he was released and subsequently signed by the Pittsburgh Pirates. He continued to struggle with his control but made steady progress. Things started falling into place for the right hander in 1961, after moving to the bullpen for the Columbus Jets, the AAA affiliate of the Pirates. That would earn him an invitation to spring training with thebig club and he would make the team as they broke camp for the 1962 season.

After a solid rookie year, Lamabe would be traded to the Boston Red Sox. He would turn in another strong year out of the pen, doubling his innings pitched and posting a respectable 7-4 record. The Red Sox would try to move Lamabe to the starting rotation in 1964 and he would not fare as well, finishing the season with 9-13 record and a soaring ERA of 5.89. Lamabe would return to the bullpen in 1965, but would get off to a terrible start. His ERA would balloon over 12 runs per game in late May, and by the end of June, he would be demoted to their AAA affiliate in Toronto. While there he would terrorize the International League posting some of the best numbers of his career. Clearly Lamabe belonged in the major leagues.

In September, Lamabe would return to the majors but this time as a member of the Houston Astros. He would only appear in 3 games for the Astros, but 2 innings of scoreless relief against the Cardinals on October 2 might have been a sign of things to come.

Lamabe would be traded to the Chicago White Sox after the 1965 season. Splitting time between the bullpen and rotation, Lamabe would improve in 1966, lowering his ERA to 3.93 in 121 1/3 innings. As a starter he would throw three complete games, two of them being shutouts.

Lamabe would return to the White Sox for the start of the 1967 season and get off to a good start, allowing only one earned run in three relief appearances. At the end of April he would be traded to the Mets where he would settle into the role of a long reliever. Although used sparingly, Lamabe would would face his future teammates four times, albeit with mixed results. Yet another sign of things to come.

When Bob Gibson went down with a broken leg on July 15, the Cardinals front office moved quickly to find somebody they could drop into the rotation. Jim Cosman, who had been called up to replace Ray Washburn a month earlier, had pitched well on two occasions, but was starting to suffer some control problems. Within a week, Cosman would be sent back to Tulsa to work on his mechanics, but he would not return to the big leagues as a Cardinal. A young prospect named Mike Torrez was dominating hitters in AAA, but was not yet ready to face major league hitters, especially in the heat of a pennant race.

That left manager Red Schoendienst with two relievers that had some starting experience, Al Jackson (lefty) and a newly retooled Nelson Briles (righty). Jackson had been a member of the starting rotation earlier in the season, but had been replaced by another left hander, Larry Jaster. In spite of throwing a brilliant one hitter on April 25, Jackson’s inability to get into the late innings prompted his reassignment to the bullpen. Since the change, Jackson had done well as both a long reliever and lefty specialist. That left Briles to fill the void in the starting rotation.

With the Mets coming into town, a deal was put together quickly to secure a right handed arm to replace Briles in the bullpen. The Mets would send Jack Lamabe to the Cardinals for a player to be named later. For Lamabe, it meant not only reporting to the opposing clubhouse but his first assignment would be against his former teammates. 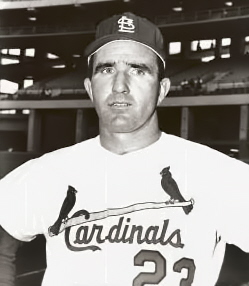 First impressions of the new hurler were not good. In his first action as a Cardinal, he would give up seven hits and five runs in just two innings of work. He would also take the loss as the Mets beat the Cardinals, 8-5. Two days later he would suffer his second loss as a Cardinal, but this one was really the fault of Joe Hoerner, who allowed five runs to score without recording a single out. Not a good beginning for Lamabe with his new team.

Things would turn around on July 19 when Lamabe would pitch a scoreless inning in relief of side-armer Ron Willis in an exciting extra inning game, earning his first save as a Redbird. Both Lamabe and rookie reliever Willis would become the right handed version of Hal Woodeshick and Joe Hoerner out of the Cardinals bullpen, giving Schoendienst a lot of flexibility when needed.

That brings us to August, when Jack Lamabe would deliver the best pitching of his career. In 8 relief appearances, Lamabe would hold the opponents scoreless. Over 16 innings, he would only allow seven hits, striking out 14 while walking only 3 batters. Remember, Lamabe was a pitcher that battled control problems early in his career. His best relief appearance was an amazing seven innings of relief on August 12, when he would take over for an ineffective Steve Carlton. In those seven innings, Lamabe would only allow three hits while striking out six and walking none.

As impressive as those seven innings were, Lamabe saved his best for last. The Cardinal arms were starting to wear out and complete games were becoming scarce. Help was just a few days away as the September callups would provide some much needed relief. Not only that, Bob Gibson had started throwing batting practice to anybody who would pick up a bat, and that meant his return to the rotation was just a few days away. Before any of that could happen, the Cardinals still had one hurdle to clear: a double header on August 28 against the New York Mets. Jack Lamabe’s former team.

The Mets won the opener, 4-2 with Jack Fisher getting the win. Former Cardinal Ron Taylor, a hero of the 1964 World Series, earned the save. Steve Carlton had another rough outing for the Cardinals, and Red had to go to his bullpen early, using Al Jackson, Hal Woodeshick and Ron Willis. For the nightcap, Schoendienst would give the ball to Lamabe for a start against his former club, knowing there would be little help coming from the bullpen. Lamabe would keep his perfect month of August in tact, going the distance in a 6-0 complete game shutout. He would allow six hits while striking out five and walking one, but more importantly he saved the bullpen . What an amazing month and what a turnaround for the right hander.

For his efforts, Lamabe would come in second in National League Player of the Month honors, behind teammate Orlando Cepeda. The effervescent leader of the Cardinals would maintain his .340 batting average and drive in 25 runs for the month. Cepeda would be further honored by receiving the National League Most Valuable Player Award for 1967. As impressive as that was, the pitching of Lamabe was the real story of August 1967.

Lamabe would get shelled in his first appearance in September, giving up 5 runs in 2 1/3 innings against the Pirates. After that it was back to nearly his August performance. He would appear six more times and allow just one run.

The veteran right-hander would get the ball three times in the World Series. In games 2 and 5 he would pitch 2 1/3 innings of scoreless relief, striking out four with no walks. This is lost in the box scores behind the legendary performances of Jim Lonborg and Bob Gibson. Lamabe would take a tough loss in game 6, allowing two runs in just 1/3 of an inning.

At the end of the season, the Cardinals would send veteran left hander Al Jackson to the Mets to complete the deal back in July, signifying their intent to keep Lamabe in the picture for 1968. As the Cardinals broke camp the next spring, a sudden excess of quality pitchers meant there wasn’t room to keep another right handed arm in the bullpen, so the Cardinals traded him to the Cubs just before the rosters had to be trimmed down. He would see frequent action with his new club, appearing 42 times, all in relief. That would also be the end of his major league career.

After his playing days were over, Lamabe would stay involved with baseball. He would coach college baseball at LSU and serve as a minor league pitching instructor and talent scout for both the San Diego Padres and Colorado Rockies. Lamabe would pass away at the age of 71 on December 21, 2007.

His time was brief in St. Louis, but his impact was significant. For an amazing three months of wearing Cardinals red, Jack Lamabe should be remembered as a winner.

One thought on “Jack Lamabe: Rising to the Occasion”