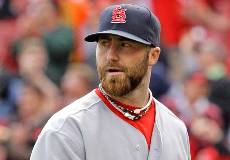 On Tuesday, long time close Trevor Hoffman announced his retirement. Despite the fact “Hells Bells” collected his 600th save this year, it was probably one year too late.

Don’t get me wrong. As a Cardinal fan, I thoroughly enjoyed watching Trevor serve up meatball after meatball in 2010. For instance, I was at the April 11th game in Milwaukee when he gave up back to back homers to Pujols and Holliday allowing the Cardinals to come from behind and tie it up in ninth. It was a terrific turn of events. That is until the bottom of that frame when McClellan gave up a homer to end the game.

My favorite Hoffman/Cardinals memory was from August 2009 when he blew a save against Holliday. The game seemed all but over until Pujols was walked and Holliday followed up with a go ahead two run homer. It was fun and thrilling, for Cardinals fans that is.

But more often than not, Hoffman did his job. He was a precise pitcher and a fierce competitor. He’ll always be associated with greatness and should arguably be a HOF inductee one day. I wish him well on his retirement from Major League Baseball.

With a shut down closer like Hoffman, a team can more often than not shorten the length of a game. Meaning; all you have to do is get to the ninth inning with a lead. At that point you can count on your closer to shut down the game. This, in essence, only gives the opposition 8 innings of scoring opportunities. You don’t have to be a baseball expert to know what kind of an advantage that is.

Trevor Hoffman’s retirement leads me to ponder state of the closer position on the St. Louis Cardinals. It’s been a hot topic over the last few seasons. Ever since “Izzy” broke down in 2008, the position has been in question.

Sure, Ryan Franklin has taken a strong hold of the reins. But there are many, myself included, who do not feel comfortable with Franklin. There is always that sense that he is one game away from an epic meltdown that could spiral into season long meltdown. He’s never had a dominating fastball. He pitches to contact. That can be good if you are only giving up ground balls. But if you start elevating your pitches, disaster awaits.

His performance in 2009 was stellar. That year, Franklin had an ERA of 1.92 as batters hit a paltry .220 against him. He collected 38 saves that year. His first half was so dominant he was voted onto the NL All-Star roster.

Most of his earned runs were earned in the second half of the season. But that’s been the problem with Franklin, hasn’t it? He starts out the season strong but clearly gets winded by the end of the year. It’s concerning because heading into the playoffs your best from your closer.

So going forward, who will be the closer of the Cardinals if Franklin can no longer get the job done? Traditional thinking says it should be Jason Motte. He certainly has the fastball for it. Jason can reach the upper nineties on a good night. And he has the “moxie” to be a closer. He yells, he shouts, he tries to intimidate. The issue with Motte has been control and a second pitch to compliment his fastball. His numbers definitely improved last year. He dropped his ERA from 4.76 in 2009 to 2.24 in 2010. If he can continue to develop a second pitch and get his control mastered, he could become a dominant closer.

There has been some discussion about Kyle McClellan becoming a closer. He did collect two saves last year. And, he has shown some brilliance coming out of the bullpen with a 2.27 ERA. But I tend to see him as a potential starter or a long reliever. I think using him for three outs at the end of the game would be wasting his talent.

Toward the end of the 2010 season there were a lot of people clamoring on internet message boards and chat rooms for Fernando Salas to take the closer role. He definitely had a promising rookie season. The righty pitched in 27 games with a 3.52 ERA. With more experience he could work his way up to the role of closer if Motte can not take a strong hold of the position.

Finding an heir to Franklin will have to take place soon. I am inclined to think one of the names mentioned above will be taking over before the Cardinals look outside of the organization. Money is tight and the talent is in St. Louis already.

One thought on “Close the Door”