Ryan Theriot is projected to be the Cardinals Opening Day shortstop, and Skip Schumaker the second baseman. Many have expressed anxiousness at how well they will play defensively. How will Theriot and Schumaker compare to recent keystone combinations?

Fangraphs started keeping defensive data in 2002, so let’s look at Cardinal combinations starting with there. Take a walk down memory lane and remind yourself of these duos. When multiple players played the position in a season, I chose the guy who started the most games there.

Interesting that 2009-2010 marked the first time since 2000-2002 the same two players started the majority of games at second and short.

Using UZR/150 from Fangraphs, here is how each individual performed. 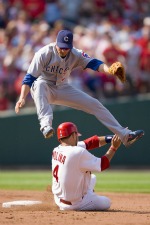 We see a ton of variation in these statistics, even among those with multiple seasons at the same position. 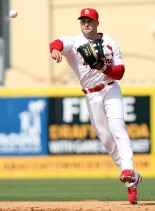 Ryan was the best defensive shortstop of this group, Renteria was very good, Eckstein was ultimately not very good during his time in St Louis. On the other side of the bag, Kennedy was above average defensively for most of his career (despite the wide statistical variation seen in St Louis), and Schumaker is well below average.

For the one-season guys, starting at second base, Vina and Womack were in their primes before advanced defensive metrics came to be, making it hard to generalize this one season as indicative of their careers. Hart only played part of one more season (2004), again making it hard to determine if 2003 is an accurate reflection of his talent. Grudzielanek had some very good defensive seasons with the Royals after leaving St Louis, and his 2005 score is right in line with those years. Miles is poor defensively and has seen his innings in the field at second base decline every season since 2006. Izturis has long been considered an excellent defensive shortstop and his career numbers back that up.

Back to the 2011 pairing. Virtually everyone who has weighed in on the subject projects Theriot as below average defensively at short. However, his pre-2010 numbers were pretty good by UZR/150: 4.4 in 2007, 2.3 in 2008, 4.1 in 2009. Only last season did he show a marked drop-off (-18.1), but he only played 246 innings at short (in comparison to at least 850 in each of the previous 3 seasons). Theriot will probably not play to the level of Renteria, Ryan, or Izturis, but he almost certainly won’t be as big a liability at second as Eckstein was in 2004 and 2006. Schumaker is a below-average second baseman and will continue to be so.

Theriot will be a step back from Ryan, but is not as weak a defender as Eckstein was. There won’t be a superhighway up the middle for ground balls to take into the outfield. This combination will not be as stone-fingered as the 2006 and 2007 Cardinal versions were. In fact, given the trend of having one position post a negative or average UZR/150 and the other a positive, 2011 should be just like 7 of the last 9 seasons in St Louis up the middle.