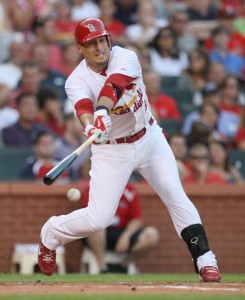 Over the last two seasons, there has been a glaring problem with the St. Louis Cardinals. That issue has been the bench. With the exception of Nick Stavinoha early last season, the Cardinals have been lacking a late inning hero who could be counted on to give the Cardinals some “pop” when they needed it the most.

For example, think back to the (many) extra innings game against the Mets last year. The only thing the Cardinals needed was someone to come in off of the bench and get the “big hit”. Inning after inning, no one from the bench was able to deliver that knock out blow. It ended up costing the Cardinals the game, and in the end, their season.

It’s unwise to discount the need for solid bench players. Teams like the 2009 Rockies rode established, veteran bench players like Jason Giambi right into the playoffs. The 2006 Cardinals benefited from bench players like So Taguchi and Scott Spiezio. The former providing a key HR that helped push the NLCS to game 7.

Coming out of Spring Training in 2010, management decided to go with youth on the bench. Memphis all-stars Allen Craig and Nick Stavinoha were asked to play late inning roles along with Joe Mather and Tyler Greene. The results were mixed, at best.

As mentioned before, Nick “the stick” won some early games with late inning heroics in April. But the magic did not last. By season’s end, his .308 average fell to .256. More damaging was the power he displayed in April faded completely by May.

After having a magical Spring Training, Allen Craig struggled mightily at the plate. The role as a bench contributor did not play to Craig’s benefit. He struggled at the plate while not getting consistent playing time. The result was an atrocious .056 average by the end of April.

Joe Mather did not fare any better. By the end of May Joe was batting a paltry .191 off of the bench.

To the credit of management, they recognized the bench was not contributing. A decision was made to go after some veteran players to help give the bench a more seasoned flavor. Unfortunately, the veteran players Mozeliak went after were not much better.

Veteran cast offs Randy Winn and Aaron Miles were signed in June to improve the bench. It became clear as the long season wore on that these veteran back ups were not the answer. For me the worse of the two was Winn. He not only struggled to provide any spark at the plate, he also failed to provide any defense in right field. The epitome of his poor defense was against the Rockies during the brutal come from behind loss the Cardinals suffered in extra innings.

Needless to say, neither man was invited back to the Cardinals for 2011.

Which once again puts the pressure on the “baby birds” to fill the bench spots. The 2011 bench should include Jon Jay, Allen Craig, and Tyler Greene. All three of those players garnered major league experience last year. The Cardinals management is banking on all three to provide depth to the infield and outfield when needed. Of the three Jay’s defense is arguably the most important. Jay will more than likely be spelling newly acquired Lance Berkman in right field in late inning save situations.

Depending on young players like Craig, Greene, and Jay is risky, but may pay off. More than likely the Cardinals are going to have to sign a few available veteran players. There are players still available to fill that role. Players like Manny Ramirez, Vladimir Guerrero, Johnny Damon and Jim Thome remained unsigned. All are past their prime, but all could provide that veteran bat needed in critical PH situations.

The role the bench will play in 2011 is major. If Mozeliak is able to sign a few contributors to compliment the young bats, it could help push the Cardinals into the post season. If he settles for more “low hanging fruit”, we could see more of the same failures in critical situations.

One thought on “Bench Press”