The aftershocks of the Zack Greinke trade are still reverberating in Royals-land, and KC fans are trying to wrap their heads around life without Zack and the outlook for the four new names added to the franchise. A lot of unknowns. But here I will take a look back at the known: Greinke and fellow trade piece Yuniesky Betancourt’s time with the Royals. Zack and Yuni both stirred the emotions of Royals fans. The similarities end there though. 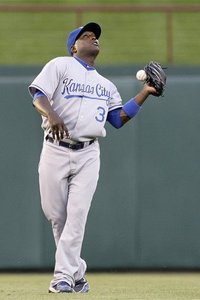 Betancourt was another stopgap in the seemingly endless merry-go-round of subpar shortstops in Kansas City, and became a whipping boy for many fans. To the sabermetrically inclined, GM Dayton Moore’s acquisition of Betancourt mid-season 2009 was another glaring example of the organization’s head-in-the-sand attitude towards advances in baseball analysis. He was dreadful in his 71 games with the club in ’09 and marginally better in 2010. His 16 home runs—four of the grand variety—in 2010 came out of nowhere and did provide a boost. Still, that Moore included him in this trade takes the sting out of losing Greinke ever so slightly.

Zack has been a part of the Royals organization since the 2002 draft, so Royals fans have had a long time to get attached to him. He whizzed through the minors and made his Royals debut in a start in Oakland in 2004 when he was just 20 years old. He pitched well enough in his five innings that day to be in line for a win. The game served as an ominous foreshadow of things to come for Greinke: with the Royals up 4-2 and two outs in the bottom of the ninth, the Royals were primed to celebrate their young prospect’s first victory. But Eric Chavez hit a two run blast to tie it up, and the Royals dropped the game in the 11th. If Zack had any idea how many times his talents would be wasted by hapless Royals teams over the ensuing years, he would have demanded a trade then and there. Instead he trudged on, and had an encouraging rookie year (3.97 ERA, 4.70 FIP). Then came a tortuous sophomore campaign in which nothing seemed to go right. Zack wasn’t as bad as his 5.80 ERA and 5-17 record suggested (his FIP actually improved to 4.49), but the year took a toll on him.

His struggle with anxiety and depression that led to him walking away from baseball in 2006 spring training has been well documented and probably overblown, so here’s the short version: Greinke headed home to Orlando thinking he might become a lawnmower, but received some help and rediscovered his drive to play. Zack has credited then Royals GM Allard Baird and manager Buddy Bell for handling his problems with grace. He headed to AA Wichita where Frank White was managing and the team was winning games. Zack was supposedly enjoying being part of a winning team so much that he was disappointed when the call came to head to the losing big league club for three late-season relief appearances.

Greinke was hit hard early in ’07 and was moved to the bullpen after seven starts. There he made 38 largely effective appearances before being put pack into the rotation in time for seven more starts at the end of the year. It was in those games Greinke began filling his potential as an ace. With the season winding down, he shut out the White Sox for eight innings, allowing two hits, zero walks and striking out 10. He has never looked back. In 2008 he put it all together over a full season, and Kansas City had the makings of a star on their hands.

Royals fans were already endeared to Greinke at this point, but it was taken to a new level when he signed an extension before the ’09 season that everyone thought would keep him in Kansas City through 2012. In a city jaded by seeing homegrown players who achieve success bolting for larger paydays, fans were jubilant that Zack actually wanted to stay. He seemed to think Moore was putting the Royals in a position to contend, and silly as it seems now, there were dreams that the ’09 Royals could do just that. A motivated Greinke flew out of the gates, reeling off one of the sickest stretches of pitching in history. It took 24 innings into the season for anyone to get a run off him—and it was unearned. Through 10 starts, his ERA stood at 0.84 and he had 73 strikeouts and 12 walks. Royals fans started wishing each other a Happy Greinke Day when he was starting. And as if they needed anymore reason to love him, he told the media in New York, “I don’t want to pitch for New York in the playoffs. I want to pitch for Kansas City in the playoffs.”

The complete domination abated slightly in the middle of the season—perhaps when it was clear the Royals weren’t contenders—but then returned in full force at the end of the season. On August 25, he struck out 15 to set a new Royals record. He followed that up with an even better game: a one-hit shutout in Seattle. Much of his success was predicated on a slider so filthy it buckled the knees of anyone in a ten mile radius. He landed on the cover of Sports Illustrated and dominated an inning of the All-Star game. When the year was over, he had 242 strikeouts, a 2.16 ERA, an impossible 205 ERA+, a 2.33 FIP and a Cy Young trophy. It was probably one of the three greatest individual seasons in Royals history (along with George Brett’s 1980 and Bret Saberhagen’s 1989). 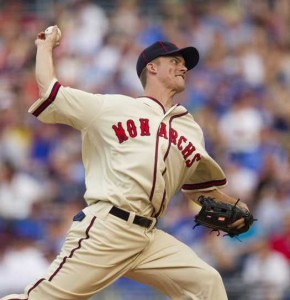 But Zack never seemed particularly excited about or interested in the individual achievements. He found it “annoying” when KC fans chanted “Cy Young” during his last home start of ’09. Greinke just wanted to win. And in spite of his once-in-a-decade performance in ’09, the team was merely 17-16 in games he started thanks to criminally bad run and bullpen support.

No one was deluding themselves that the 2010 Royals would be contenders, and it seemed to most observers that Zack lacked motivation last season. The traditional stats (4.17 ERA) show that he was downright mediocre, but of the things Zack could control, he was still an elite pitcher (3.34 FIP). Fangraphs WAR rated him the seventh best pitcher in the AL in 2010. But in August, he revealed to the Kansas City Star just how frustrated he was with the Royals. He stated that he had no reason to get excited about another youth movement in Kansas City since even if it paid dividends, it would not be until after his contract was up. Then during this off-season, it became clear Greinke was pushing hard for a trade to a team that had a chance to win now. Dayton Moore had failed to build a competent team around his star, and that led to his hand being forced to move him.

There are real reasons to be excited about the future of the Royals starting in 2012 or so, but for now, there’s a gaping hole on the mound where one of Kansas City’s favorite athletes used to be. Dayton Moore signing Greinke to that extension in ’09 was probably his finest move as GM; his inability to keep Greinke content and in KC may be his worst. I shudder to think what a re-energized Greinke might do to the National League in 2011. And for now, Royals fans are left to wonder what could have been in Kansas City.

2 thoughts on “A Look Back At Zack”