After Adam Dunn’s recent signing with the White Sox, I pulled up his career stats, and could hardly believe his home run totals from the last seven seasons: 46, 40, 40, 40, 40, 38, 38. The consistency is stunning, but being a Royals obsessive, something else struck me: Adam Dunn has out-homered the Royals single season record for seven straight years. (The only other player I’ve been able to find with such a streak is Babe Ruth, who hit at least 41 for seven consecutive years, 1926—32.) Dunn’s incredible stretch prompted me to delve deeper into just how pitiful the Royals lack of home run power has been.

Royals fans have enjoyed some great players over the years, but the team has somehow never had a hitter bust out with even a 40 home run season. They are the only current franchise without a 40 homer hitter. The team mark is an embarrassingly low 36, set by Steve “Bye-Bye” Balboni in 1985. Barry Bonds’ all-time record of 73 is more than twice the Royals record.

Only ten times has a Royals player reached 30 homers:

Some of the lack of power is explained by the home run graveyard that is Royals/Kauffman Stadium. In recent years, the Royals inability to hang on to power hitters has also helped keep the record intact: Carlos Beltran had 15 home runs with KC in 2004 before he was traded to the Astros—he finished the year with 38, and then peaked at 41 with the Mets in 2006. Ex-Royal Jermaine Dye knocked 44 in 2006. Health problems have also played a role: had Bo Jackson and/or Mike Sweeney been able to stay healthy, they may have taken a run at the record.

Only the Twins join the Royals in failing to have a player hit more than 36 home runs in a season since 1985. The Twins do at least have the memory of some huge home run years: Harmon Killebrew alone had nine seasons over the Balboni line.

The average home run record for the 29 non-Royals franchises: 53
Average number of 37+ home run seasons per franchise: 15
Times a Yankee has hit 37+: 38
Number of individual seasons of 37+ home runs since 1985: 244
Average number of seasons of 37+ per team since 1985: 8 (In other words, if the Royals had kept pace with home run hitters around the bigs, Balboni’s mark would have been surpassed eight times in the last 25 years.)

I posted a few of these stats on Twitter recently, prompting this response from Jeff Parker of Royally Speaking: “You are bumming me out.” So, hey, how about some hope: I asked Greg Schaum of Royals Prospects what he thinks the chances are of someone currently in the Royals system breaking the record. Greg feels Mike Moustakas has the best shot: “Moose should have 3-4 peak years where he could break that record…But he still needs to prove he can handle big league pitching (especially breaking stuff). But he would be the guy with the best chance.” Moustakas’s final home run tally last year in the minors was…36. 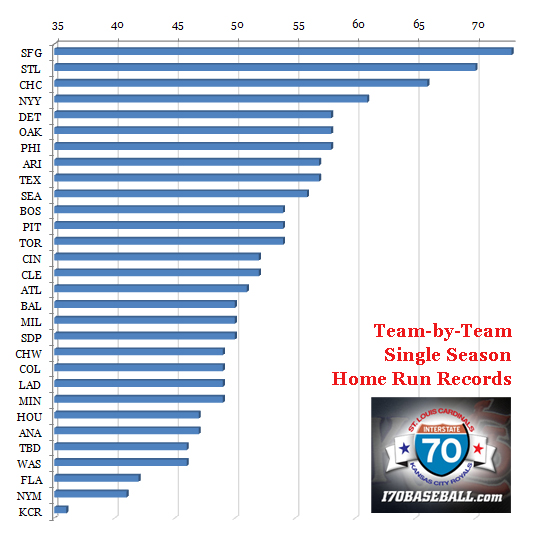