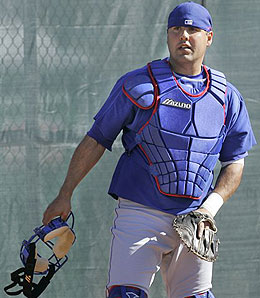 In the midst of the big story that is Cliff Lee, the Cardinals have signed Gerald Laird to become the backup catcher to Yadi Molina, officially ending speculation that Bengie Molina would join his younger brother on the roster. Laird will assume the roster spot left vacant by Jason LaRue’s retirement.

Possibly the most confusing thing about the signing is the change in direction the Cardinals have taken when it comes to the position. Shortly after the season concluded, the Cardinals identified a need to upgrade the offensive ability of the backup catcher role with the departure of Jason LaRue. The idea of a back up catcher that could provide some offensive pop was new to the organizational strategy, as the front office has always shown a desire to have a strong defensive catcher that can handle the major league staff well in that role. The addition of Laird shows a return to the strategy used in the past and an abandonment of the idea of changing those strategies.

Laird was drafted by the Oakland Athletics organization in 1998 and was traded, coincidentally with Ryan Ludwick, to the Texas Rangers organization in 2002. It was 2003 before he would make his debut on the Major League scene, with a short stint with the big club.

2006 would see Laird get his first substantial playing time and he would respond by hitting .296 with 7 home runs and 22 runs batted in, though he struck out 54 times. His success in 2006 would translate into a starting nod the following season. While he would throw out 40% of would be base stealers in 2007, his offensive production would fall of drastically, hitting .224 and striking out over 100 times, though he would hit a career high 9 home runs.

In 2008, the see-saw would tilt the other way, seeing his defensive presence decrease with a 28% success rate of throwing out base runners while his batting average would rise to .276 and his strikeouts would drop to 63. He would play in less games in 2008, and would find himself with a change of scenery for 2009.

An off-season trade sent him to Detroit where he would spend his first season in a Tigers uniform as their primary backstop. He would only strike out 68 times over 477 plate appearances, but he would see his batting average drop to an abysmal .225. He would show an increase in his patience at the plate, working more walks than previously in his career. On the defensive side of things, he realized his potential and showed that he was not a catcher that you could run on, throwing out 42% of would be base stealers. His performance in 2009 would regulate him to back up duty in 2010.

His final season on his contract with Detroit would see him continue to throw out baserunners (34%), continue to underperform at the plate (.207 Batting Average/57 Strikeouts/270 at bats). Detroit would allow him to walk away from his $3 million plus salary and explore free agency where the Cardinals would scoop him up.

The Cardinals have acquired a catcher with a career batting average of .242 that averages 108 strikeouts, 9 home runs, 52 runs batted in and a .300 on base percentage over 162 games. He also sports a .988 fielding percentage, 38% caught stealing rate, and a 4.56 earned run average during innings he has played (ML average is 4.35). As a backup, he obviously will not be looking to put up numbers of that caliber unless Yadier Molina would go down with injury.

Laird will be looked at to manage a staff in the absence of the primary catcher, provide solid defense and keep the confidence of some very passionate pitchers in the organization. If he can gain the confidence of the pitching staff, it will be a solid signing. If not, Bryan Anderson would have sufficed. When it comes down to it, if the backup catcher plays a significant role in the 2011 success of this team, there are much bigger problems than what Gerald Laird represents.