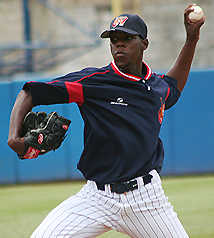 Now that the Winter Meetings are completed and Cardinal fans can start to digest the moves that have been made up to this point, a very under-the-radar part of the Winter Meetings that most look past is the Rule 5 draft. It’s simply a draft set up to prevent teams from loading up on young talent. Teams that don’t have top-tier farm are allowed to add some prospects to their Minor League systems.

Players like Josh Hamilton, Dan Uggla, Joakim Soria, Johan Santana, Shane Victorino, and the great Roberto Clemente are some of the most notable Rule 5 draftees, so there’s obviously some importance in the draft. Unfortunately, you can also lose prospects. Which is exactly what happened to the Cardinals.

Brian Broderick, one of my favorite prospects, was picked up by the Washington Nationals. The 6’6” right-hander spent most of the season in Springfield where he posted an impressive 11-2 record with a 2.77 ERA and 1.093 WHIP while only walking 14 batters in over 100 innings of work.

It wasn’t a total loss for St. Louis though. They acquired former Toronto, Minnesota, and Chicago prospect Jean Mijares. While little is known about Mijares, he boasts some very impressive numbers that I noticed were very similar to one of the Cardinals top prospects Eduardo Sanchez. Mijares hasn’t really been a closer (only 11 saves five seasons) and is left-handed as opposed to right, but that is virtually the only difference between him and Sanchez. Both throw exceptionally hard, have a very small frame, have almost identical 2010 stats, and even grew up only miles away from each other.

By no means am I saying Mijares will have the same level of success that Sanchez has had throughout his Minor League career, but the similarity is definitely something to think about.

One thing Mijares needs to improve on if he wants to take a similar path through the Minors is his command (something Sanchez also had problems with). If he can learn how to hit his spots with a little more consistency, Mijares has potential to shoot through the Minors. He may not be a top Major League prospect, but could very well make a deep impact in the Cardinals farm system.