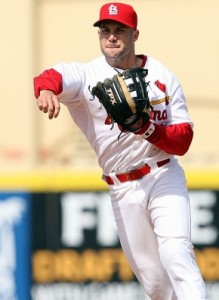 When the Cardinals acquired Ryan Theriot from Los Angeles, the initial analysis placed Theriot at shortstop and Brendan Ryan on the trade block. Ryan was indeed on the trading block, and the Cardinals discussed trading him to San Diego and a few other teams.

Ryan was not dealt at the winter meetings, so St Louis has some alternative courses of action. They can continue to try and deal Ryan. They can keep Ryan, play him at short, and move Theriot to second, or vice versa. They can use Ryan as a late-game defensive replacement and go with Theriot and Skip Schumaker as their middle infield.

I’m sure the team would like to move on from Schumaker manning second base. Skip should get a ton of credit for being willing to shift positions, working diligently to become a good second baseman, and manning the position for the past 2 seasons. But although he was slightly better in 2010 than 2009 (he cost the Cardinals 2 fewer runs in 2010 as calculated by Dewan plus/minus), he will never be anything but a below-average defensive second baseman. His hitting also took a pretty big dip in 2010, as he posted an OPS+ of 83 (as compared to 102 the year before).

Assuming Theriot is the everyday shortstop, what do the Cardinals do at second? The free agent crop at second is nothing to write home about. There’s Orlando Hudson, and then a ton of has-been’s and never-will-be’s. Let’s think out of the box. What about Adrian Gonzalez’s older brother Edgar?

You’ll probably recall Edgar was once a Cardinal farmhand; he played at Memphis in 2007, posting a .308/.377/.447 line in 519 plate appearances (PA). He played the next two seasons in San Diego, and spent 2010 in Japan (for the Yomiuri Giants). The middle Gonzalez brother could always hit, as his 2007 minor league season will attest. Those two seasons in Petco Park depressed his numbers a bit (.255/.312/.381 in 522 PA), but who’s numbers aren’t affected by that ballpark? OK, perhaps not his brother (who may hit 50 HR playing half his games in Fenway next season), but everyone else seems to take a hit. Just ask Ryan Ludwick.

From below average to average defensively, with no drop in offense. The Cardinals should determine if Edgar Gonzalez is available and interested.