If you have not already, you may want to first read part one of this article here.

After the disappointing finish to the first half of the season, the Monarchs started the second half in Muskogee, Oklahoma on July 7 against the Birmingham Black Barons. Jackie started things off with a bang, homering twice in the contest. Lefty LaMarque held the Barons to just one run while hurling a complete game, and the Monarchs put up six runs. The two teams met again the next day, this time in KC, and Jackie continued to terrorize Barons pitching, hitting 3-for-5 with two doubles, two runs and three RBI. After a 2-for-4 game on the 16th, Jackie had hit safely 35 times in the 70 at-bats I’m aware of to that point.

On the 22nd, the Monarchs were in Detroit for a double header vs. the Memphis Red Sox. 25,000 fans turned out for a classic day of baseball. Satchel Paige pitched a rare complete game in the first half en route to a 3-1 win. Jackie put on quite a display of Negro Leagues small ball: Following a Herb Souell triple, Jackie laid down the squeeze. Souell scored and Jackie reached first safely. Then he stole second, then third, and raced home safely on a dropped ball at the plate. Hilton Smith topped off the double header with another victory for the Monarchs.

The Cleveland Buckeyes had the Monarchs’ (and everyone else’s) number in 1945. After losing all five contests against them in the first half, the Monarchs had one last chance to beat them on July 24. Jackie homered, but the Monarchs fell short yet again to the Buckeyes. Jackie left an impression on Cleveland manager Quincy Trouppe, who wrote this in his memoir 20 Years Too Soon: “…I played against (Jackie) in Cleveland, and he overpowered my pitcher’s curve with a line drive into the left-field stands. I knew then he had the makings of a top pro. When a young player breaks into pro ball hitting the curve with authority, you can expect to see him develop into an excellent hitter.”

From Cleveland, Jackie and his teammates Jesse Williams and Booker McDaniels headed to Chicago for the East-West all-star game. Jackie was the starting shortstop for the West in spite of having been a pro player for just four months. He had a rare rough day at the plate, going hitless in five at-bats, but finished off the 9-6 victory for the West by spearing a sharp grounder behind second and nailing the runner at first.

Jackie’s final month as a Monarch started with a long road trip through the east that passed through Philadelphia, Pittsburgh, DC, Wilmington, New York, Boston and Baltimore. The mighty Josh Gibson put a crimp on the start of the trip with a game winning home run for the Homestead Grays on August 7th. The teams met again the next night, and pitcher Hilton Smith held the Grays in check this time, allowing just three hits and two runs. Jackie displayed a bit of his famous base-running; from the Pittsburgh Courier: “With (Lee) Moody at bat and (John) Scott on first, the fleet-footed Robinson came home from third when Josh Gibson tried to nail Scott attempting to steal second. Robinson slid in under Jackson’s return throw to Gibson.”

Jackie’s last game with the Monarchs for which I have a box score came on August 16. Jackie hit 1-for-3, bringing his overall total to 41-for-99 (.414). In regular season games against Negro American and National League opponents, I have Jackie at 23-for-53 (.434). Jackie probably played in over 100 games with the Monarchs, and the 99 at-bats I have for him come from just 26 games. These numbers are mere hints at how Jackie fared, but, paired with the rave reviews he received from newspapers all over the country, they leave the clear impression that he was a phenomenal player in 1945.

Heading into an August 19th doubleheader with the Cincinnati-Indianapolis Clowns in Cincinnati, the Monarchs second half record stood at 10-4 (in games I know of anyway). They were still in the running for the second half crown, but the Clowns put a dent in their plans with a sweep of the two game set. The two clubs met each other in Nashville the next night, and Satchel Paige delivered a dominating performance: 15 strikeouts, 1 walk, and 4 runs allowed in a 6-4 victory.

The Monarchs next traveled to Chicago for a four game set with the American Giants over August 24-27. The Monarchs had a series to forget on the field, dropping all four contests and falling out of contention for the second half title, but there was a monumental event off the field. The Brooklyn Dodgers, in the person of scout/coach Clyde Sukeforth, made their first contact with Jackie at the game on Friday the 24th. Sukeforth convinced Jackie to travel with him to Brooklyn, where Jackie and Branch Rickey had their famous meeting on August 28th. After agreeing to join the Montreal Royals, the Dodgers’ triple-A team, for the 1946 season, Jackie headed home to Los Angeles, and his five months as a Kansas City Monarch were over.

The Monarchs continued their late-season slide, dropping the last six games for which I have a result. (The Cleveland Buckeyes cruised to a second half title, making them the undisputed champs of the American League. They took home a World Series after defeating the National League champion Homestead Grays.) The regular season may have been over, but the Monarchs weren’t done playing ball just yet. They barnstormed through the south with the Clowns for much of September, and called it a year with a shutout victory over the Clowns in New Orleans on September 30. 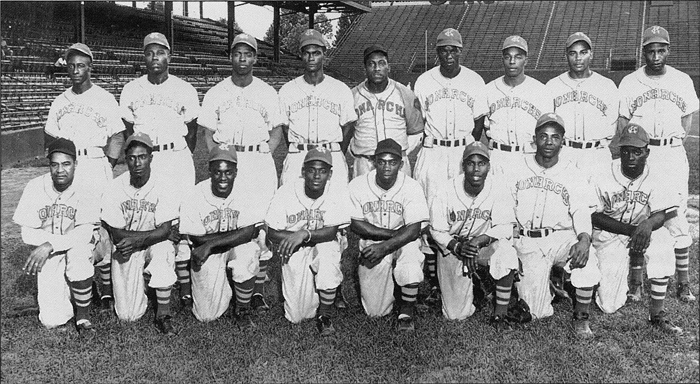