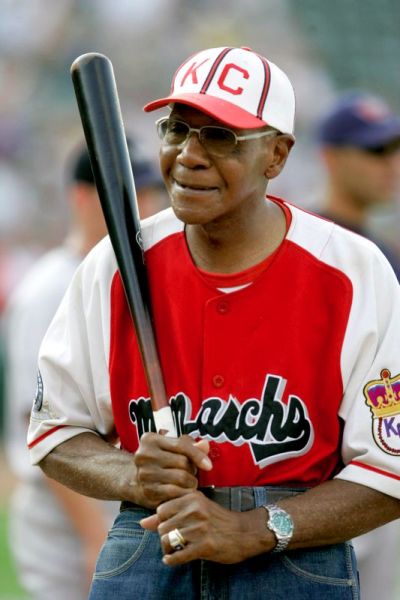 This week, Major League Baseball bid adieu to an amazing ambassador, an on the field superstar, and a lifetime Chicago Cub. Ron Santo had passed away and it brought attention to the fact that he is not in the Hall Of Fame. Baseball fans would join Cubs fans in open wonderment on how Santo was not in the Hall Of Fame based off his work on behalf of baseball as an ambassador alone. Kansas City fans did more than that, they understood.

John Jordan “Buck” O’Neil spent a mediocre 12 seasons playing in the Negro American League. Throughout his playing career, O’Neil developed relationships with many players that crossed his path and became a true student of the game. He would break the color barrier in Major League Baseball for coaches, becoming the first African-American coach. He was named a coach for the Chicago Cubs in 1962 and is recognized for agreeing to the terms of Lou Brock’s first professional contract.

Years after his retirement, O’Neil would become one of the most interviewed and well spoken experts on Negro League and Baseball history. He would work tirelessly to see fellow Negro League players receive proper honor by getting them inducted into Cooperstown and the Baseball Hall Of Fame. He would sit on the voting committee for the Hall Of Fame from 1995 to 2001, inducting one Negro League great each of those six years. O’Neil served on a Veteran’s committee from 1981 to 2000. In 1990, O’Neil led the charge to establish the Negro League Museum in Kansas City, Missouri.

In 2006, the Baseball Hall Of Fame and Museum held a final vote for players and coaches associated with the Negro Leagues, electing 17 people for induction. Buck O’Neil would speak at that induction ceremony. O’Neil was not one of those 17 players, a fact that many people thought broke his heart. O’Neil himself would say this on the matter:

“God’s been good to me. They didn’t think Buck was good enough to be in the Hall of Fame. That’s the way they thought about it and that’s the way it is, so we’re going to live with that. Now, if I’m a Hall of Famer for you, that’s all right with me. Just keep loving old Buck. Don’t weep for Buck. No, man, be happy, be thankful.”

O’Neil would fall ill later that year, succumbing to a long life and passing away at the age of 94 on October 6, 2006. He was awarded the Presidential Medal Of Freedom, posthumously, on December 7, 2006. The Hall Of Fame honors a player every three years with the “Buck O’Neil Lifetime Achievement Award”.

Maybe someday Ron Santo will be inducted for all that he has done for baseball. When he is, Kansas City fans will rejoice to see justice served for a well deserving player. For now, they will have to be satisfied with that justice being served for another player instead of Buck O’Neil.

One thought on “He Belongs In Cooperstown”