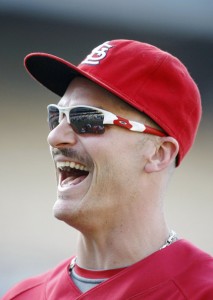 As the winter meetings begin and the MLB offseason rages on, it appears as if an era of Cardinals baseball may be coming to an end. Brendan Ryan, one of the most loved players on the 2010 roster, may have played his final game as a Cardinal.

According to several sources, the Cardinals have started shopping Brendan Ryan and plan on non-tendering him. The newest St. Louis shortstop, Ryan Theriot, was in a very similar position in Los Angeles. The Giants acquired Juan Uribe to replace Theriot, who was also a non-tender candidate, and days later “The Riot” was traded to St. Louis. The same thing appears to be happening to Brendan as all signs point toward him being moved within the next month.

The Cardinals drafted Ryan in the seventh round of the 2003 draft and has moved his way up to starting shortstop since then. In four years with the big league team, Ryan has hit .259/.314/.344 in over 1200 at bats. His best year came in 2009 when he hit over .290 and scored 55 runs, but his production took a gigantic nose-dive this season. His numbers plummeted (slugging percentage dropped almost 200 points) and exposed a massive offensive problem in the middle infield for the Cards.

Fortunately, his glove is quite a bit better. Brendan was a brick wall in the field and was at the top of the leaderboards in several fielding statistics, including an MLB-best 11.5 UZR. He’s one of the best shortstops in the Majors, but it is the offense that needs to be replaced.

Defense is a key component in baseball, but the numbers will show you that you have to be able to hit. Good ole’ Bill James taught me that one. The ability to hit as a team is the most important part of the game, and the 2010 lineup definitely had it’s ups and downs when it came to that. Offensive production from the middle infield, especially at shortstop, was probably the biggest problem with the team. When every player goes to the plate at least four times every single game, one lousy-hitting SS can really make a difference. Remember when you were a kid and would yell at the opposing team, “easy out!” when they were hitting? Well, Brendan Ryan is an easy out. 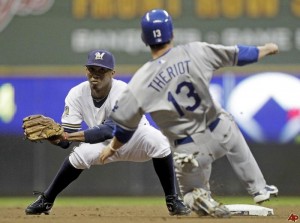 John Mozeliak said earlier this week that Theriot would probably be Ryan’s replacement, but there are more and more rumors that the Cardinals are still looking for an upgrade at short. That would then move Theriot to second (where he is a much better player) and move Skip Schumaker back into a platoon role in right field (where he, as well, is a much better player). Jason Bartlett, Stephen Drew, Marco Scutaro, and J.J. Hardy are among the shortstops with the most attention as possible Cardinals. Then again, Theriot’s name never surfaced.

If the Cardinals plan on acquiring another shortstop or not, and I believe they do, it appears as if one of the “goofiest” players to ever put on a Cardinal jersey may be leaving. It could be time to say goodbye to another fan-favorite.

One thought on “Is The Brendan Ryan Era Coming To An End?”