In a move that the team themselves broke on Twitter, the Cardinals have announced an agreement on a one year deal with Lance Berkman.

Cards announce the signing of OF/1B Lance Berkman to a 1yr deal. #stlcards

Berkman has not played the outfield since 2008, nor has he played there consistently since 2007, but identified the Cardinals as possible suitors earlier this week, most likely because of the ability to play the outfield. He has been very vocal about not feeling that his career has reached a point that he should be a designated hitter on a regular basis. During the 2007 season, his UZR/150 was an abysmal -48.4 as a right fielder for the Houston Astros.

Moments after the signing was announced, General Manager John Mozeliak was quoted on local radio station KMOX 1120 AM:

Mozeliak on Berkman: “He’s an impact player who not only helps solidify our everyday lineup, but he also brings a wealth of experience."

It appears that Berkman will assume the role of of starting left fielder and most likely provide some additional help at first base for superstar Albert Pujols. Matt Holliday will make the move from left to right field, a move that he was attributed to offering to make last season if the team need him. 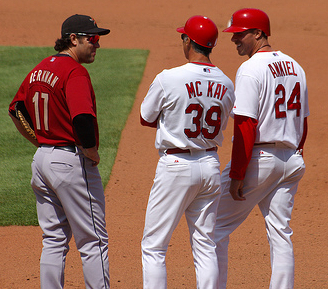 Berkman, once part of the “Killer B’s” in Houston, has been a solid bat that maintains an acceptable strikeout rate. Berkman has averaged more than 27 home runs and 91 runs batted in over the course of his 12 year career. His numbers dipped last year as he played in his fewest games in a season since 2000. He would post all time lows in home runs (14), runs batted in (58), and batting average (.248) in 2010.

There is no reason to think Berkman cannot rebound to his previous form. He is a lifetime .296 hitter with a lifetime .409 on base percentage. Consistency from the lineup was one of the largest complaints in 2010 and a healthy Berkman that returns to form could help solidfy that problem.

He provide a solid, power bat, most likely in the number five slot behind Matt Holliday. His high on base percentage may make him a prototypical number two hitter in a LaRussa lineup. The manager likes some pop from the number two spot and the ability to have someone consistently on base in front of Albert Pujols and Holliday might be the grand scheme of this signing.

Berkman’s signing may make young outfielder Jon Jay available at next week’s winter meetings. Jay, a left handed hitter, was rumored to be entering 2011 to be involved in a platoon situation with Allen Craig in right field. With Berkman’s splits favoring him hitting from the left side, it would make sense that Allen Craig is retained to play against left handed pitching and Jay will be expendable.

Early reports from Sports Illustrated writer Jon Heyman say that the deal is worth $8 million for the single season.