On Monday, December 6, the Walt Disney World Swan and Dolphin Resort isn’t a place for dreamy children’s wishes to come true. Instead, it transforms into a winter wonderland full of promise for the big boys still playing a kids game. MLB’s 109th annual Winter Meetings hits the Sunshine State while the rest of the country battles Old Man Winter. The Florida sun combined with rumors surrounding baseball’s best will fuel the Hot Stove. 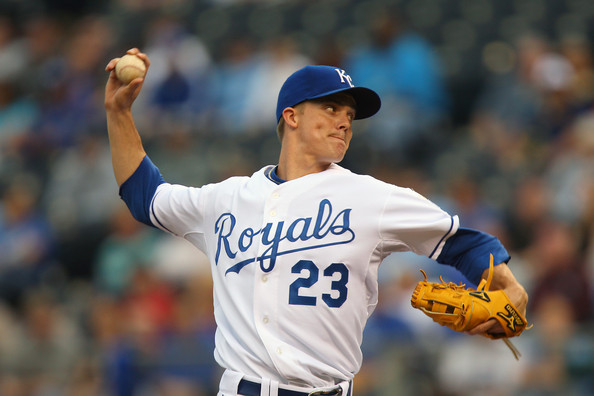 Concerns from Royals fans as to whether Greinke will still be sporting Royal blue next week are founded. The trade talks began four months ago during the regular season trade deadline, but any potential deals fizzled. Besides Lee, this year’s free agent starting pitching choices are slim. The opportunity to acquire a top of the line ace is limited essentially to two options, give Lee about $150 million or mortgage the farm to trade for Greinke.

I’m not here to debate whether trading Greinke is the right move or not. Frankly, since my name’s not Dayton Moore, my opinion on moving Greinke doesn’t matter. Instead, I’d like to take a look at what the Royals should expect if a deal is made.

There has been some debate as to what a Greinke-sized haul would look like. Would Moore prefer major league ready talent since there is little to speak of on the roster now? Would he seek a grab bag of the top prospects to bolster what’s already been created in the minors? Would he trade Greinke to any team to receive the greatest return?

There are a lot of moving parts around the rumors. The past few days has provided a bit of clarity surrounding Greinke. On Tuesday, Yahoo’s John Passan reported Greinke wouldn’t rule out being traded to a contender like New York, despite his no trade clause for 15 clubs. Sports Illustrated’s Jon Heyman reported Thursday Moore would not deal Greinke within the division.

To create a list of ‘interested’ teams would be futile. Every single GM in baseball is ‘interested’ in a talent like Greinke. Instead it will wither to teams with a desperate need for a top arm and the pieces in place to make the deal happen.

As of now, the two most likely destinations for Greinke, New York and Texas are locked in a contract tussle over Lee. Whoever comes out on the short end of the Lee deal will surely see it as a necessity to match the others move by making a push for Greinke. Considering these two teams were battling over the AL pennant a month ago, neither wants to be outdone this offseason.

To get an idea of what these clubs would pony up for Greinke we should take look back at recent deals for Cy Young Award winners, Roy Halladay, C.C. Sabathia, and Lee (three times). Before looking at those trades it must be noted the deals made for Sabathia and Lee were essentially half-season rentals. Greinke still has two years and $27 million left on his contract. At $13.5 million each year, Greinke is a steal in the MLB economy (SP deals done so far this offseason – Jorge de la Rosa/ $11 million per year, Javier Vazquez/ $7 million per year, John Garland/ $5 million guaranteed $3 million incentives, Hiroki Kuroda/ $12 million per year, Jake Westbrook/ $8.5 million per year).

As you will see, most of the trades brought back 4-5 prospects, 2-3 being top tier prospects breaking into Baseball America’s top 100 minor leaguers. Because of Greinke’s club friendly contract, as well as gaining his services for two seasons instead of half a season should result in a bigger even return for the Royals. Numbers in parentheses are their ranking in Baseball America’s Top 100 in 2009-10.

While the amount of players in each deal is fairly consistent, the talent differs. The 2008 Indians (Matt LaPorta), 2009 Blue Jays (Kyle Drabek), and 2010 Mariners (Justin Smoak) all based their deals around one major prospect complimented by a few mid level prospects.

In 2009, the Indians went for a more balanced return. They received four prospects all in the top 100, but not higher than Marson at 44. I didn’t include Lee’s second trade from the Phillies to the Mariners because they received significantly less than any other deal. Mainly, they were trying to move Lee’s contract quickly since they had just acquired Halladay.

It’s hard to evaluate if these were worthwhile deals considering most of the players involved are just now breaking into the big leagues. None the less it still gives us some ground to stand on.

If Yankees shell out another huge offseason contract, the Rangers offer a deep farm system to pick from. Moore has no doubt lustily reviewed the scouting reports of the Rangers two top pitching prospects, LHP Martin Perez and RHP Tanner Scheppers.

Moore was brought up ‘the Braves way.’ An emphasis on pitching strength constructed within the organization. Moore was quoted as saying ‘it takes about 20 pitching prospects to find 4 or 5 major leaguers.’

Moore’s moves have reflected that exact mentality of selecting high end arms in the draft and more recently, dealing David DeJesus for two young arms. Moore would jump at the opportunity to add the likes of Perez and Scheppers to the Royals youth movement.

Baseball America rated Perez as the Rangers number one prospect, while Scheppers checks in at third. Scheppers was recognized as having the best fastball and curveball in the Rangers organization. In BA’s projected 2014 lineup, Perez and Scheppers are already penciled in as the number one and two starters in the Rangers’ rotation.

Engel Beltre, number five on the list, could be potential trade bait as well. The 20 year old Dominican is highly touted for his defense. BA claims he is the best defender and has the best outfield arm in the organization. In his first year of rookie ball Beltre hit measly .243. His offense is starting to catch up with his defense though, this season in A+ and AA Beltre hit .300, 6 HR, 49 RBI, and 18 SB.

If Lee happens to stay in the Lone Star state, the talks with the Yankees will heat up. The deal will be centered around Jesus Montero, who is widely considered the top hitting prospect to break into the MLB in 2011. Montero is listed as a catcher, but the verdict is still out on his future behind the dish. The Yankees are set on catching Montero in 2011 to take the burden off of aging Jorge Posada. Bill James’ projects Montero having a monster rookie campaign .285/.348/.519, 21 HR, and 67 RBI.

This is where the potential return comes into question. Does Moore take a chance on a bat that plays with no position? If he ends up not being a competent catcher the Royals are stuck with three top level players for two spots (Montero, Billy Butler, and Eric Hosmer). Apparently, the Yankees offered Montero in a deal for Joakim Soria during the 2010 trade deadline, but Moore balked at the offer.

Despite the questions about Montero’s defense, the Yankees offer a deep system to find future Royals out of. All of the potential prospects clocked in the top ten in the Yankees system, RHP Andrew Brackman (5), LHP Manny Banuelos, and C Austin Romine (6).

The Yankees offer some intriguing big league options too. RHP Ivan Nova made his first seven MLB starts last year down the stretch. Left fielder Brett Gardner would fit perfectly into the leadoff spot and is capable of playing center in the spacious Kauffman outfield. Gardner got on base just under 40% of the time in 2010, while swiping 47 bags and driving in 47.

If a deal isn’t done within the next week, next month, or next trade deadline it doesn’t mean Greinke won’t eventually be traded. Moore realizes the longer teams wait to pull the trigger on a Greinke trade, the less return they will get out of him for the prospects they give up. With that in mind, Moore is presumably testing the waters with Greinke and seeing what his maximum return is. After he realizes his worth, Moore will seek a deal which would maybe get 10-20% more than expected. There is no doubt, the more games Greinke starts as a Royal, the less valuable he is to other organizations. If Greinke is still a Royal as his contract dwindles, he will certainly garner less in return.