The 1945 Monarchs were far from being one of the best Monarchs squads put together, but their historical significance is great thanks to the impact their shortstop would soon have on baseball and America itself. Below is a look at the pre-season and first half of the season that Jackie Robinson spent with the Kansas City Monarchs.

The Monarchs began convening in Houston on Tuesday, March 20th. Players trickled in over the next several days. Jackie had to conclude his basketball coaching duties at Samuel Houston College in Austin before making his way to Houston on the 27th. The Chicago Defender reported that Jackie “looked good” in his first workouts. According to Arnold Rampersand’s biography, Jackie was dismayed that “Spring training consisted of actually playing baseball games rather than getting prepared for the coming season.” He only had five days to shake off the rust before competing in the Monarchs’ first pre-season exhibition on April 1, an Easter contest in San Antonio against the mysterious Engle’s Minor League All-Stars. According to the Defender, Jackie “showed up well at shortstop, accepting nine chances with but one error and figuring in three fast double plays.” The teams dueled for 14 innings before ending the game in a 4-4 tie. The Monarchs stuck to the South during the pre-season, playing games in San Antonio, Houston, Ft. Worth, Dallas, Birmingham, Montgomery, Atlanta, Memphis, Little Rock, New Orleans, Waco and Oklahoma City. Their opposition was usually the Chicago American Giants, Memphis Red Sox or Cincinnati-Indianapolis Clowns.

Just 21 days after joining pro baseball, Jackie was in Fenway Park trying out for the Boston Red Sox—sort of. Politicians and sportswriters were holding the Red Sox brass’s feet to the fire on integration, and basically forced them to hold the tryout that also included Negro Leaguers Sam Jethroe and Marvin Williams. (Jethroe went on to be NL rookie of the year in 1950.) Boston coaches said the right things after the tryout, that they were “impressed” and the players “looked good,” but to no one’s surprise, none of them were pursued by the Red Sox. But Jackie’s name was already in the mix of potential players to integrate MLB.

The pre-season exhibition schedule lasted over a month, and in the few game results I’ve scraped together, the Monarchs went 6-6. Jackie hit 4-for-7 in the two games for which I’ve seen box scores. 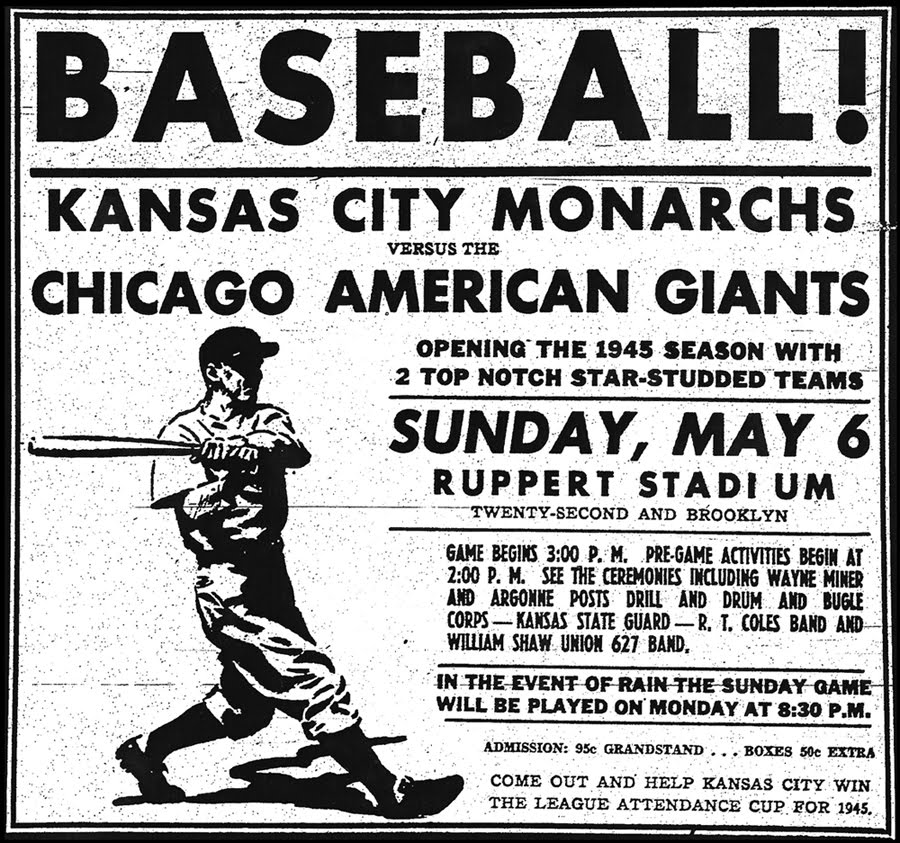 The Negro American League season was split into halves, with the winners of each half to face each other in a league championship. The first half kicked off in Kansas City’s Ruppert (or Blues) Stadium at 22nd & Brooklyn. The Monarchs faced a familiar foe in the Chicago American Giants. Pregame activities commenced at 2:00, and the first pitch was scheduled for 3:00. The Monarchs batting order looked like this:

The Monarchs cruised to a 6-2 victory, and Jackie had a fine debut with an RBI double, stolen base, and a run scored. Jackie continued tearing the cover off the ball throughout the first half—he hit .481 in the 12 games I have his numbers for in the first half.

Future Hall-of-Famer Hilton Smith had a day to remember on May 13 when he pitched a complete game victory in addition to going 2-for-3 at the plate with a double, run scored and three RBI. The third Hall-of-Famer from the ’45 squad, Satchel Paige, debuted with the team on May 30 in Chicago. Satch gave up two runs on three hits and a walk in six innings of work, and struck out six. Jackie had a banner day at the plate that day: he was perfect with three walks, two singles, a double and a triple in seven plate appearances combined in the doubleheader. The Monarchs first eastern swing of the year started on June 17 with a game in Yankee Stadium against the Philadelphia Stars. Jackie started the Monarchs winning rally with a single.

The team had a hot start to the year and was 14-5 through June 17. Things fell apart from there however, and they dropped eight of their last nine games to finish third in the Negro American League. They would have to take the second half if they wanted a shot at the league championship.

Final first half standings from the July 6 Kansas City Call:

I’ll cover the second half soon here at i70baseball.com. I’ve relived the 1945 Monarchs season in depth at my blog Jackie With The Monarchs.