As part of our inaugural edition of the I-70 Hall of Legends, today I-70 Baseball retires a uniform number that has come to represent greatness in both St. Louis and Kansas City – the No. 20, worn by the Cardinals’ Lou Brock and the Royals’ Frank White.

Lou Brock may be one of the most unforgettable players to ever wear the birds-on-the-bat, a catalyst at the top of the order who was recognized as one of the most prolific base stealers the game would ever see. While he was not the defensive presence of his uniform-number counterpart in Kansas City, Frank White, he was an offensive threat who went down in history as one of the game’s best left fielders and was enshrined in the Hall Of Fame.

Just as Lou Brock is an unforgettable part of St. Louis Cardinals history, Frank White is a legend in Kansas City. White is a member of the Royals Hall of Fame, and his No. 20 is one of only three numbers retired by the Royals (along with George Brett’s No. 5 and Dick Howser’s No. 10).

Unlike Brock, Frank White is not a member of the Baseball Hall of Fame, although some, including writer Joe Posnanski, have argued that perhaps he should be. 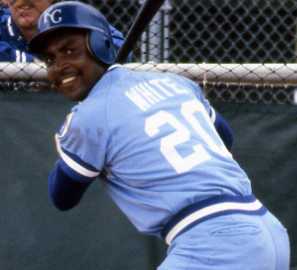 While White built a resume that many argue should put him in the Hall Of Fame, Brock made sure there was no doubt. Brock joined baseball’s elite hitsmen, posting 3,023 hits in his career. He batted .293 over the course of his career and posted a .343 on-base percentage. It was his production in scoring runs and stealing bases that made Brock a legend, deserving of the honor we bestow upon him today. He scored 1,610 runs in his career while stealing 938 bases. His stolen base mark would remain the best in the history of the game until Rickey Henderson came along.

Lou’s glove never won him any awards, but the same cannot be said for the player who wore No. 20 for the Royals.

If there were a Defensive Hall of Fame, no doubt Frank White would be a first-ballot inductee. He was brilliant with the glove, patrolling second base at Kauffman Stadium for nearly two decades. During that stretch, he won eight Gold Gloves, including six in a row from 1977-1982. Only Roberto Alomar and Ryne Sandberg have won more Gold Gloves at second base, while Bill Mazeroski has also won eight.

While we’re on the subject of Mazeroski, let’s expand one of Joe Posnanski’s points: Mazeroski, a Hall of Famer, and Frank White had very similar careers. Both have eight Gold Gloves, of course, but check out these two sets of statistics:

The first set, with the higher batting average but lower power numbers, belongs to Mazeroski.

But the purpose of this article is not to espouse Frank White’s Hall of Fame credentials. It’s to discuss why his number has been retired in I-70 Baseball’s Hall of Legends.

Frank White epitomizes what Kansas City Royals baseball is all about, perhaps better than anyone else. He was a product of the famed Royals Academy. He went to college in Kansas City. He took over second base from the beloved Cookie Rojas, and although he was despised for that at first, before long he became a fan favorite. He was a major part of those great Royals teams in the late 70s and early 80s. He was sitting right next to George Brett when Brett stormed the field during the Pine Tar Game. He helped lead the Royals to their only World Series title. He batted cleanup in the 1985 World Series. He won eight Gold Gloves. He retired from the game gracefully, unlike so many professional athletes. He stayed with the Royals even after retirement, serving as a coach, minor league manager, and now a broadcaster. (For more about the career of Frank White, read John Lofflin’s wonderful I-70 Baseball piece here.)

In 2005, while he was serving as a coach for the Royals, Manager Tony Pena quit after a disappointing start to the season. White was interested in the job, but the team decided to hire someone with managerial experience, and hired Buddy Bell (who, by ALL accounts, turned out to be a complete disaster).

Rumor has it, some sort of under-the-table deal was struck: once Bell’s tenure was over, White would be seriously considered for the position. To gain managerial experience, he stepped down from his Major League coaching position and took the job as skipper of the Wichita Wranglers, where he coached and mentored some of the current-day Royals stars, including Billy Butler and Zack Greinke.

When Bell quit at the end of 2007, White was the clear fan’s choice to be named skipper. But new general manager Dayton Moore hired Trey Hillman – who, like Frank White, had no big-league managerial experience.

Hillman, much like Bell before him, was a disaster.

But through all of that, Frank White never spoke an ill word about the organization that, you could argue, stabbed him in the back.

For that alone, Frank White is truly a legend.

Lou Brock continues to be an intimate part of the Cardinal family to this day. Serving as an assistant coach in Spring Training, making 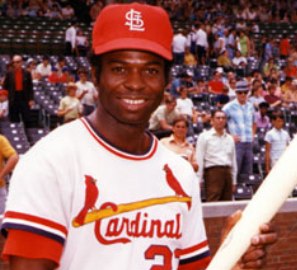 numerous public appearances on behalf of the team, and being openly involved in the yearly Opening Day ceremonies, the legendary player passes his knowledge of the game on to the next generation of players who wear Cardinals uniforms. Brock stays involved, stays in the public eye, and works with the organization on a regular basis.

Brock put a cap on his legendary career in 1979 and found himself enshrined in Cooperstown in 1985. His number was retired by the Cardinals and he is enshrined in the team’s hall of fame. Many websites, writers, and experts have firmly placed him as the team’s all-time greatest left fielder.

I-70 Baseball salutes two of the the greatest Royals and Cardinals players of all time by retiring No. 20.

Bill Ivie contributed to the Lou Brock portions of this report.