Quick. Name all the players with 300 home runs and 300 stolen bases. Name the only player to hit 20 homers with six different teams. Name a player who, in the last decade, played in three World Series for three different teams.

You’d be hard pressed to find many fans out there that could come up with the answer to those questions.

The name Reggie Sanders wouldn’t come quickly to the minds of many fans when it comes to such lofty credentials. Sanders flew under the radar most of his career – frequently injured and generally solid but not spectacular. But St. Louis fans will remember the Reggie Sanders who played a key role in helping the Cardinals to the 2004 World Series. Signed as a free agent prior to the season, he played a solid left field and produced 22 homers and 67 RBIs while hitting .260.

For his contribution in two years in St. Louis and two more in Kansas City, Sanders is one of five players inducted into the I-70 Baseball.com Hall of Legends.

Sanders was a fixture in the World Series during the early 2000s. In 2001 he played a leading role for Arizona, hitting 33 homers and driving in 90 runs to help the D-Backs defeat New York in the series. He was back in the series the next year with the San Francisco Giants.

Sadly, Sanders was having one of his finest seasons of his career for the Cardinals in 2005 before he was derailed by a broken leg suffered in a collision with Jim Edmonds. Sanders hit .271 and tallied 21 homers in just 93 games that year. He returned from the injury in time to play in the playoffs for the sixth time in his career.

Sanders’ playoff performances in a Cards’ uniform were a mixed bag. He went hitless in the 2004 series versus Boston, but he hit .286 and homered in the NLDS against the Dodgers. In 2005 he drove in 10 runs in a three game NLDS against San Diego.

Sanders’ biggest highlight in Kansas City came in June 2006 when he joined Willie Mays, Bobby Bonds, Andre Dawson and Barry Bonds in the 300 homer/300 stolen base club. (Steve Finley joined the club just four days after Sanders) Sanders stole his 300th base in a Royals’ uniform as well.

Signed to provide veteran leadership for the Royals as they developed young talent, Sanders unfortunately spent much of his tenure 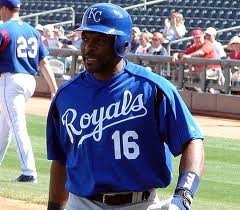 in KC on the DL. The Royals shopped his services to contending teams to no avail, and they allowed him to become a free agent after the 2007 season, in which he played just 24 games. At 40 years of age, Sanders sought opportunities to play in 2008, but eventually retired.

One can only speculate about the numbers Sanders could have compiled had he avoided injuries throughout his career. Sanders made it into 140 games in just one of his 17 seasons. In eight of those seasons, he actually played fewer than 107 games. Had he avoided injury in some of those seasons, Sanders could possibly have made it to 400 homers and 400 steals, recorded over 2000 hits and had well over 1,000 RBIs.

But regardless of the numbers, Sanders was a winner. He was a respected clubhouse leader who played a key role on several successful teams throughout his career. For his two productive seasons on playoff teams in St. Louis, and for his record-setting time in Kansas City, I-70 Baseball.com bestows the honor of “Legend” status on Reggie Sanders.