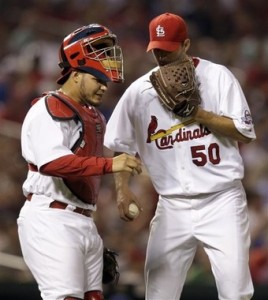 If you were asked to describe the 2010 St. Louis Cardinals in one solitary word, what would you say?

Disappointing? Of course they were, but I’d use “inconsistent.”

Even Albert Pujols, the best hitter I have ever seen, seemed to have an “off” year. His numbers are still eye-popping, but it just seemed like his impact wasn’t as evident as it was in years past. Even he seemed inconsistent. Matt Holliday, Chris Carpenter, Colby Rasmus, Ryan Ludwick (when he was a Cardinal) were all inconsistent at times.

There was one player, however, who wasn’t. Adam Wainwright put together yet another Cy Young-caliber season, and if it wasn’t the “Year of the Pitcher,” I fully believe he would have a brand new trophy sitting on his mantle.

On a team full of guys who never really found that groove in the 2010 season, Adam Wainwright when out, day after day, and pitched gems. Roy Halladay had an amazing year, please don’t get me wrong. But when you look at what both pitchers did, the Cy Young Award shouldn’t have been the landslide that it ended up being. Halladay may have pitched for a playoff team, but Wainwright was the most consistent pitcher, from April to September. It’s hard to argue that.

If you look at his statistics by month, you’ll see exactly what I’m talking about. 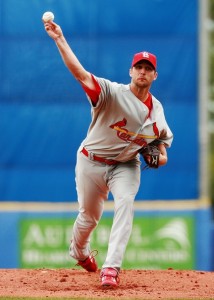 As you see, I think the word “consistent” would describe him better than anything. And isn’t that what every GM in baseball is looking for? Guys who they can put on the mound and, without a doubt, can give you some grade-A pitching. That’s exactly what Wainwright did for six months.

Adam ranked in the top three in almost every major pitching category. He was third in games started, 3rd in innings pitched, 2nd in wins, 3rd in WHIP, 2nd in ERA, 2nd in complete games, 1st in quality starts, 3rd in K/BB ratio, 2nd in FIP, and 1st in component ERA. In other words, he was, what I like to call, the “Chef’s Salad.”

Unfortunately for Waino and the rest of the Cardinal community, Roy Halladay had a brilliant season. I’m not trying to take anything away from him, and I’m certainly not suggesting the wrong guy won the Cy Young. What I am saying is that Wainwright was as good as it gets in 2010. According to his WAR number, he won the Cardinals six games. I’m not buying that though. It’s one of the hardest things to predict in sports, but I strongly believe that the Cardinals wouldn’t have done anything this year without Wainwright.

Runner-Up: Jaime Garcia
Jaime had one of the best rookie seasons we’ve ever seen from a starter. He found his inner Fernando Valenzuela, and if it wasn’t for Buster Posey, Garcia may have very well won the Rookie of the Year.