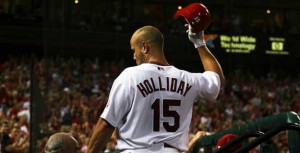 On Saturday I mentioned that the shortstop has been one of the most talked-about positions all year, but it doesn’t hold a candle to outfield. If there was a time during the season when one of the outfielders wasn’t in the news, I’m having a hard time thinking of it.

From game one to game 162, at least one of the eight Cardinal outfielders to play in 2011 were in the news. Whether it was good or bad publicity, no position was talked about as much as the outfield this season.

Opening Day 2010 started with Matt Holliday in left, Colby Rasmus in center, and Ryan Ludwick in right. While two of those three ended the season at their respective positions, the season was full of controversy in the outfield.

The three mentioned above were the unanimous starters in April, but two highly-touted prospect outfielders made their own impacts on the team. Both Jon Jay and Allen Craig debuted in 2011, and both had very different levels of success.

Jay started his ’10 season with the AAA-Memphis Redbirds, and was the team’s best hitter for the first few weeks before his call-up. The 25-year-old played in 26 games before being sent back down. His first stint in St. Louis, Jay went 10-for-38 with four runs, two RBI, nine strikeouts, and no walks. He was sent down for a month before bringing brought back up, and St. Louis fans were introduced to a entirely different Jon Jay. Not only did Jay play in 23 games in July, he started 18 of them. In 72 at bats, he hit .431/.500/.667 with 14 runs, nine doubles, one triple, eight RBI, and 11 walks compared to only nine strikeouts. Jay had established himself as not only a Major League player, but a starter.

Allen Craig on the other hand… not so much. While Jay was emerging as one of the best hitters on the team, Craig was being one of the biggest disappointments on the team. From April through July, Craig hit a dismal .142, and was showing he obviously was not ready for the big leagues, even after accumulating more RBI than games played throughout the course of his season in Memphis.

The window of opportunity was shrinking day by day for Craig, until July 31st, when Ryan Ludwick was sent to San Diego as part of a three-team trade that brought Jake Westbrook to St. Louis. Up until that point, the Cardinals were 58-46 and Luddy was batting .281/.343/.484 with 44 runs, 11 home runs, and 43 RBI in 77 games. After the trade, the team went 28-30 and had one of the worst collapses of recent memory. Many fans blamed the trade began to question General Manager John Mozeliak. Unfortunately for Mo, that was no the last time he was the recipient of bad publicity.

Barely a month after the Ludwick trade, rumors of a different trade began to circulate. On September 5th, Cardinals center fielder Colby Rasmus reportedly requested a trade from Mozeliak due to the playing time he was getting from Manager Tony LaRussa. Later, both Rasmus and Mozeliak denied that the conversation ever took place, but Colby’s name has been in the middle of trade rumors ever since.

Like I said, the season was full of outfield-controversy. Strangely enough though, the Cardinals OF was one of the best in the league, and maybe the best in the National League. St. Louis finished near the top in almost all offensive categories, and ranked high in the defensive metrics as well.

It should be another interesting season in the outfield for the Cardinals. Matt Holliday, the lone star of the returning outfielders, should put together another fine season after his Silver Slugger Award-winning 2010 campaign. Rasmus may or may not be back, but if he is, his relationship with Tony LaRussa is something to keep an eye on. As for right field? Nobody really knows at this point. As of right now, the plan is for it to be a Jay-Craig platoon, but I wouldn’t be surprised if the Cards look at RF help this winter.

One thing is certain at this point. We all need to pray for less nonsense in the outfield in 2011. The distractions in ’10 are one of the big reasons St. Louis watched the playoffs from their sofas. If that continues, they may do it again.