Shortstop has been one of the most talked-about positions all year, during the season and off-season. Only three players spent time at shortstop in 2010, but Brendan Ryan was the obvious starter at short for the majority of the summer.

Felipe Lopez and Tyler Greene also contributed throughout the season, but both played less than 25 games at shortstop compared to Ryan’s 139. One thing they call had in common though was a poor season at the plate. All three batted lower than .231 and put together the worst offensive SS group of any team in the National League.

(Combined stats of the three players and NL ranks) 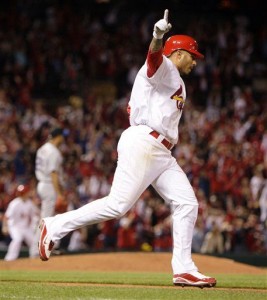 Those numbers above may very well be why John Mozeliak and the rest of the Front Office crew is looking for middle infield help this winter. Stephen Drew, Miguel Cabrera, Juan Uribe, Edgar Renteria, and Orlando Cabrera are among shortstops drawing interest from the Cardinals, and all three have had great success at the plate throughout their careers. Drew has averaged 70 RBI per season in five years, Tejada is an 8-time MVP candidate, Uribe was ranked second in the MLB with 24 home runs in ’10, Renteria hit .290 as a Cardinal, and Cabrera hit .288 from 2007-2009 and has averaged 18 stolen bases per year in his career.

Although all of those options would provide very needed help on the offensive side, none can account for Brendan Ryan’s glove. Ryan has proved to be one of the best defensive shortstops in the Majors. In the 2010 season, he ranked fifth in the MLB in defensive WAR, first in assists, fifth in putouts, first in total zone runs, and second in range factor. There were some who thought Brendan Ryan should have won a Gold Glove, something which none of the five mentioned above can say.

Even if his struggles with the bat continue, his glove is too good to part ways with. Management’s best bet is to improve the offense at second base, maybe third base, and stick with Ryan at SS. If his bat doesn’t come around, his defense will still be there, and he will always be a very cheap asset to the St. Louis Cardinals. Now, and in the future.