During the offseason we have been taking a look at the past, giving readers a timeline of St. Louis baseball throughout history. Last time we learned about how the Browns once tried to throw a batting title and how Rube Waddell drank himself out of baseball.

Hall of Famer Roger Bresnahan does not need Bill James’ approval of his Hall of Fame credentials (he does not have it – in case you were wondering). Catchers everywhere are thankful for one of his greatest contributions to the game of baseball – catcher’s gear. Prior to Bresnahan there were some precautions that catchers had taken in order to protect themselves behind the plate. Masks date back to the 1870’s, and gloves were always expected. The wife of Detroit catcher Charles Bennett devised the first chest protector to keep her hubby from coming home black and blue every day back in the 1880’s. It was Bresnahan that put it all together into the garb that Cardinal fans see Yadier Molina jogging out of the dugout with during the past few seasons.

By the 1911 Cardinals’ season, Roger had already created the shin guards that protect the catchers’ lower legs by restructuring a set of leg guards worn by cricket players. When he first trotted out onto a field with them while playing for the New York Giants he was received with quite a bit of flak, and the boos from the fans at Polo Grounds were well noted. He also refashioned the mask in an effort to create more peripheral vision for the players wearing them. These masks were eventually referred to as “open vision” or “wide sight” masks. It would be another ten years before anyone would be able to improve upon what Bresnahan had created to keep himself safe while out on the diamond.

Catching was actually not Bresnahan’s first position (or even his favorite). He actually began as a pitcher, throwing a six-hit shutout in his first career start. He eventually moved to catcher, but he logged innings at every position on the diamond. He was such an athlete that both John McGraw and Branch Rickey labeled him as one of the best at his position (whatever position that may be) of all time. To top it off Bresnahan was also the player-manager from 1909 through 1912 for the Cardinals. Talk about a “jack of all trades” type!

Besides his brilliance with creating protective garb, as a manager Bresnahan made an incredibly lucky call on July 11, 1911; a call that happened after the game that day was well over. The Cardinals were traveling to Boston by train after a day game. Since it was a late train and the team would be traveling through the night, the manager pitched a fit that his team’s Pullman car was so close to the loud engine and requested that the car be moved to the back of the line. The railroad complied, and the train pulled out. 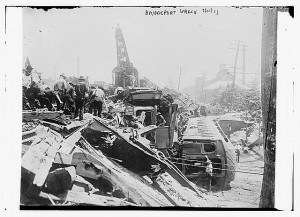 In the middle of the night disaster struck. The train derailed and slid down an eighteen foot embankment. The Cardinal players were uninjured and immediately went to work, diving into the wreckage for fifteen solid hours and rescuing as many people as they could. Despite their efforts and the efforts of the other passengers at the end of the train, fourteen passengers did not survive the accident. Had Bresnahan not pushed for his team to be in a quieter area of the train some of the deceased would have most assuredly included some of his own players.

Unfortunately, the gratitude of the rest of the passengers and the railroad company (who rewarded each of the players with $25 for their efforts) could not help the Cardinals overcome the tragedy of the accident. The team had started out strongly, and entered that fateful day playing ten games over .500, just three small games back of the division leading Chicago Cubs. After that day they did not find the fire, and while the Cardinals still finished over .500 for the first time in ten years, they were still well off the mark, finishing 23.5 games back.

The next few years did not go any better for the team, and while they had the firepower of new manager Miller Huggins, they only finished higher than fifth in the division once in the years of 1910-1915. The lone solid year for the Cards came in 1914, when first baseman Dots Miller and second baseman/manager Miller Huggins led the team on offense while Slim Sallee and Bill Doak held up a solid rotation that led the team to an 81-71 finish. To make things more interesting, the team was owned and run by a woman from 1911-1916! Helene Britton inherited the team from her uncle (Stanley Robinson) at his passing, and while she ran the team admirably, they obviously did not have the right composition to be a competitive team in the rough and tumble National League.

How about those crosstown Browns? The most remarkable thing they did in this little five year stretch was hire a man by the name of Branch Rickey. Rickey, a catcher, had actually been a Brown back in 1907, but after coming down with a sore arm and then tuberculosis decided to leave the team in order to focus on law school. His one notable playing contribution occurred on June 28, 1907, when he was in so much pain that he was unable to throw the ball farther than the pitcher’s mound. A record thirteen batters stole a base off of him on that day, a record that has stood for 113 seasons now and probably will continue to do so for many more years.

After leaving baseball and getting his law degree from the University of Michigan, Rickey started up the baseball team on campus and was responsible for bringing up a youngster by the name of George Sisler (Rickey signed Sisler to the Browns shortly after joining the team). After the 1912 season Robert Hedges (owner of the Browns) brought in Rickey to be his manager and general manager. Hedges shared a secret with Rickey – he was planning on finding a way to purchase a minor league team in Kansas City under the table as a way to stockpile some minor leaguers for the Browns. It was then that Branch realized what a gold mine he had stumbled into. His gold mine was something we like to call the farm system.

At the time it was illegal for major league teams to own minor league franchises (it was only made illegal after Rickey and Hedges tried it). The only way a team could farm out a player was to sell the kid to a minor league team with a handshake agreement that when the big league club needed him back they could purchase him again. Most of those handshakes were just that, and good players were often just sold to the highest bidder shortly after arriving from the big league club. Rickey had the good fortune of having cultivated a strong relationship with many minor league owners through his involvement at Michigan, but even his excellent contacts could not overcome the fact that other teams were willing to pay his friends more than he could for good minor league players.

While Rickey was stuck for a time trying to figure out how to create a better handle on the minors, he made one tremendous change with the big league club. He decided that he would take the entire Browns team down to St. Petersburg, Florida, for spring training before the 1914 season started. Miller Huggins, who was managing the crosstown Cardinals, openly criticized the move, saying that Rickey was wasting money and resources for something that seemed rather frivolous and circus-like. Taking a major league team and running around in Florida for a month having practice? Seemed like a waste to the hard-nosed Cardinal manager.

That practice time did the Browns a favor, and the team rose in the standings in both 1914 and 1915. George Sisler, Rickey’s young protégé from his coaching days at Michigan, graduated from college and joined the team before the 1915 season. The Browns front office quickly saw what Rickey had in Ann Arbor – a player who pitched as well as he hit. It was a tough decision, but eventually everyone realized that Sisler’s real value would be with his bat.

Next week: Learn more about Sisler, Rickey switches sides and creates something called ‘the Knothole Gang’.

One thought on “The Cardinals In Time: Tools Of Ignorance And The Beginning of Branch”