The Royals and advanced stats tend to mix about as well as oil and water, so if you are a Royals fan, you may want to shield your eyes from the following graphs of some advanced stats from the 2010 season.

A lot of advanced stats attempt to remove the effects of teammates and game situations to get a truer sense of how a player performed with regard to the things he had control over. WPA on the other hand is context driven. Every batter and pitcher is credited or debited the amount of win expectancy gained or lost after every plate appearance. It is a fascinating descriptive stat of what took place, but not a great indicator of a player’s actual talent. If you’re a believer in clutch performers, this stat rewards the big plays. (Click here for a better explanation.) 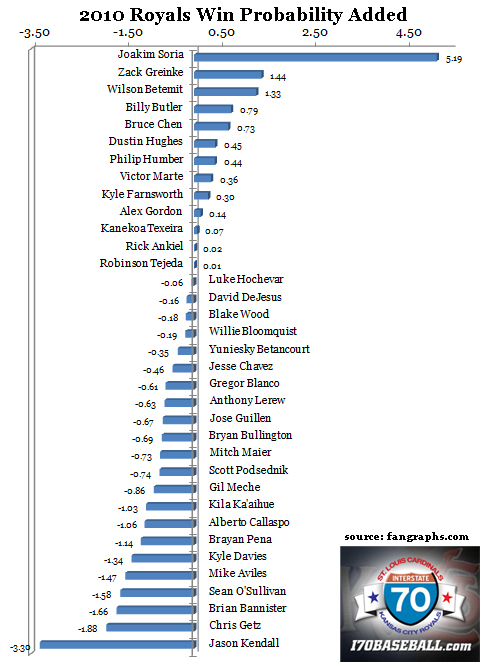 Takeaways: Joakim Soria comes out looking pretty amazing, which I believe is due to the big increase in win expectancy that comes with making the last out of a close win. Also because he is amazing. How about that Alex Gordon? His hitting numbers were not too pretty, but according to WPA he came through at good times. David DeJesus on the other hand had fantastic numbers at the plate, but you wouldn’t know it from his WPA. It is hard to overstate how damaging it was to the Royals offense to give Jason Kendall 490 plate appearances and for Ned Yost to slot him second in the order.

Straight from FanGraphs: “The percentage of pitches a batter swings at outside the strike zone.” Simple enough. 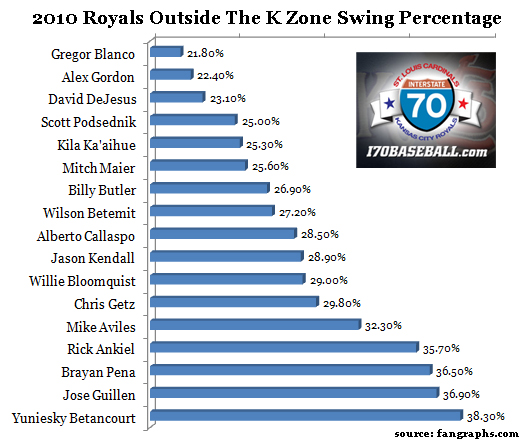 Takeaways: Gregor Blanco!? He only had 203 plate appearances after coming to KC, but in 836 career PAs, Blanco’s O-Swing% is even better at 19.6%. The advanced metrics do like Alex Gordon. His batting average has a lot of fans writing him off, but Alex knows how to draw a walk, making him more valuable at the plate than his average indicates. Oh, Yuni. Why would anyone ever throw him a strike?

Here is how the Royals stacked up against their AL Central competition in my favorite batting metric (minimum 150 PAs):

Takeaways: I have no idea what to think about Wilson Betemit. I kept waiting for his hitting to fall to earth, but he just kept hitting. We will all be watching him closely next year to see if he has any more seasons like that in him. This advanced metric does not treat Alex quite as well.

Expected Fielded Independent Pitching is on the same scale as ERA, but takes into account only those things the pitcher has most control over: strikeouts, walks, hit-by-pitches, and fly-ball percentage. One way to think about it is what a pitcher’s ERA might be if he had perfectly average “luck” and defense behind him. (If you are not familiar with straight FIP, you might want to start with this primer.) Here is how starters who threw at least 25 innings in the AL Central fared: 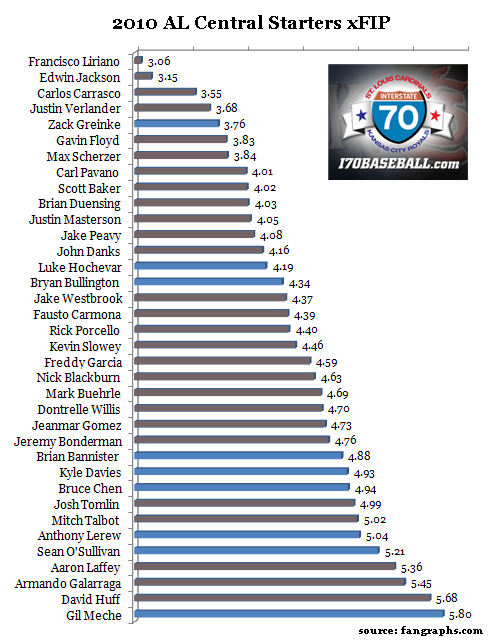 Takeaways: Zack Greinke is still filthy. Luke Hochevar’s spot is very encouraging. Bruce Chen will not be having another season like 2010, and the Royals are right to run the other way if he is after a multi-year contract as has been reported.

And the relievers who hurled 25 innings+: 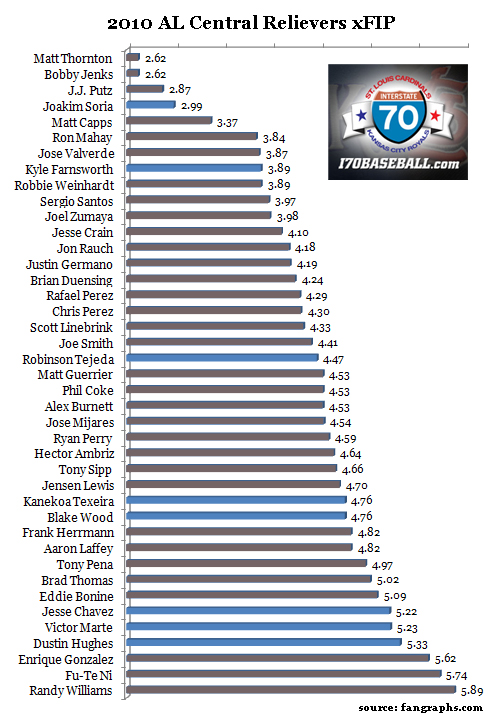 Takeaways: The White Sox have the top three spots. Bless Kyle Farnsworth for pitching well enough with the Royals that Dayton Moore was able to flip him and Rick Ankiel for Blanco and Tim Collins.