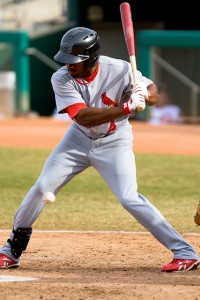 With the 2010 MLB offseason setting in, and football stealing the Nation’s attention, the Arizona Fall League is winding down. The League designed to help future Major Leaguers refine their tools often separates the real prospects from the busts, and several I-70 players put their skills to the test this fall.

This year, St. Louis Cardinals prospects made up part of the Surprise Rafters along with Kansas City Royals, Milwaukee Brewers, Texas Rangers, and Detroit Tigers representatives.

You can find Matt Kelsey’s review of how the Royals players did here, but let’s take a look at the impact that the eight Cardinals made for the Rafters.

Brian Broderick, RHP, 6’6”, 205 lbs, 23 years old
Aside from one bad start where he allowed five runs in four innings of work, Broderick has pitched as good as anyone in the AFL. Excluding his one miserable start a couple weeks ago, Broderick is 2-0 in three starts with a 2.21 ERA and a 1.35 WHIP.

Jordan Swagerty, RHP, 6’2”, 175 lbs, 21 years old
Much like Broderick, Swagerty has been one of the best relievers in the league. In his first start, Swagerty let up four runs in 1 2/3 innings. After that, Swags pitched three shutout innings. Overall, Swagerty has a 3.60 ERA, 1.40 WHIP, and three strikeouts in five innings.

Blake King, RHP, 6’1”, 195 lbs, 23 years old
Before the AFL began last month, I wrote an Arizona Fall League Preview saying that Blake King needs to prove that he has at least a little control. Well, he has yet to do that. In 6.1 innings, King has walked six batters.

Ramon Delgado, RHP, 6’3”, 195 lbs, 24 years old
Despite his numbers, Delgado has certainly had his struggles throughout the fall. While he’s only allowed two walks in nine innings, he’s also let up 10 hits. Delgado was one of the more consistent relievers in the minors this season, but he has been anything but that lately.

Adron Chambers, OF, 5’10”, 185 lbs, 24 years old
Chambers, one of my favorite Cardinal prospects, is on a little Arizona League tear of his own. In his last ten games, Chambers is 10-for-30 (.333) with six runs, seven RBI, five stolen bases, and only four strikeouts. Probably the fastest player in the organization didn’t see the green light as much as some would have liked this summer, but he’s averaging a stolen base every other game.

Pete Kozma, SS, 6’0”, 170 lbs, 22 years old
The former first-round draft pick has disappointed Cardinal fans so far in his young professional career, but has played better in the past month than he did during the season. Kozma has 10 runs in 12 games, but also averages a strikeout every game.

Zack Cox, 3B, 6’0”, 215 lbs, 21 years old
The player who some thought was the second best hitter in the 2010 MLB Draft (behind Bryce Harper), has definitely had a wake-up call in the AFL. Cox is 10 for his last 45 at bats with a mere .280 OBP. This isn’t what Cardinal fans wanted to see from Cox, but let’s keep in mind that he’s been going up against the best prospect pitchers in the country.

Justin Hulsey covers the Cardinals for i70baseball and his blog, Sport’s Top Tens, that is also dedicated to Cardinals baseball and their minor league system. You may follow him on Twitter @JayHulsey by clicking here.