How does one evaluate a hitting coach? Most guys on a Major League roster already know how to hit, otherwise they would not be on a Major League roster (there are execptions, of course; we’re talking about the every day players here). Coaching hitting at that level seems to be more of an investigative and cheerleading effort. Sure it helps if your coach has the chops of a George Sisler, but he needs to be equal parts Jack Ryan and Stuart Smalley: Ryan to figure out what’s gone wrong with your approach if a slump develops, and Stuart to be relentlessly positive.

Into this position stepped Mark McGwire. He seems to have a sunny disposition, uses video to break down the swings of his charges, and was a hitter of some renown during his playing days. Based on the opening paragraph of this treatise, he was a good fit and we are done with the discussion. However baseball is a results based business, so let’s take a look at some offensive numbers.

Comparing traditional statistical metrics for 2010 with 2009, we find they are quite similar.

The Cardinals as a team had 76 more plate appearances in 2010 than 2009, or 1.2% more; that’s not statistically significant. The one trend we can pull from this small data set is the Cardinals hit for less power in 2010 than 2009 across the board (based on extra base hits); the caveat to that statement has to be their 2009 2B total was the highest since 2004, the 2009 3B total was the highest since 2003, and 2010 marked the second consecutive season the team’s HR total dropped when compared to the previous season.

I calculated the team’s average XBH production (a) since Albert Pujols joined the team, and (b) since they moved into Neo-Busch, as well as the standard deviation for each metric.

What does that tell us despite the small sample size? That the 2010 team was right where we would expect them to be XBH production wise when compared to previous teams (within 1 standard deviation of the average calculated). So McGwire’s hiring neither helped nor hindered the team’s offensive production. 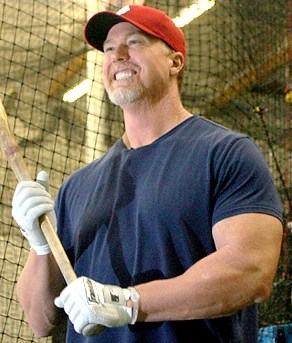 Although team strikeouts dropped a small amount from 2009 to 2010, among the individual starters strikeouts went up. Cardinal starters struck out more often in 2010 than 2009. The Cardinals walked slightly more frequently in 2010, but other than Rasmus’ big jump the starting 8’s walk rates seem to have gone down. Yadier Molina’s stats look worse in 2010 than 2009, but he did miss the last 2 weeks due to his knee; really his numbers look the same. Albert Pujols numbers were down but he still had a good year. Skip Schumaker and Brendan Ryan, as was highlighted in this Post-Dispatch article, had bad years. Colby Rasmus seems the only player upon whom McGwire had a positive influence based solely on the numbers, but how much of that was McGwire’s coaching and how much was the advice Colby’s dad gave him will probably never be known.

The argument can be made Mark McGwire did not help nor hinder the Cardinals offensive production as a TEAM, but may have negatively impacted INDIVIDUAL players based on these counting statistics.

More data is obviously better, and it is unfair to rate McGwire as a failed hitting coach after only 1 season. As was also pointed out in that Dispatch article, some of McGwire’s philosophies, like adjusting in-game to what the pitcher is doing without running to the video room, are significant departures from previous philosophies and it will take time to change that behavior. It is easier to focus on one individual hitter and evaluate his strengths/weaknesses; it is somewhat more difficult to juggle 25+ hitters over the course of the season and give them the same attention to detail. Hopefully Mark learned how to do that over the course of last season and will apply whatever lessons he learned to 2011.

McGwire deserves a passing grade if only because the Cardinal offense did not regress in 2010. Improvement in how well they drive the ball should be a focus area for the 2011 team, and we as observers should evaluate how well he’s doing that as the 2011 season progresses.