The 1985 Cardinals squad was the best Cardinal team Whitey Herzog ever managed. They fell just short, and Herzog would never get within 12 outs of another World Series championship again. Whether Don Denkinger’s call, the subsequent Cardinal meltdown both in that ninth inning and Game 7, the lack of offensive production finally catching up to them (they hit .185/.248/.269 in the series), or some combination of events led to their defeat will continue to be debated.

Although Herzog once described the locker room after that Game 6 as the most despondent one he had ever sat in, the Cardinals would eventually recover from this loss. It would not be in 1986; they finished 3 games under .500. Not that it would have mattered, because in 1986 the New York Mets won 108 games, tying the 1975 Cincinnati Reds for the third most wins in a season in NL history.

It would be 1987. That Cardinal team sprinted out of the gate, opening a 9-game lead over Montreal at the All-Star Break. They would stumble down the stretch, entering a key September series with New York clinging to a 1.5 game lead. But they took two of three, won the division, then held off the San Francisco Giants in the NLCS (thanks to back-to-back shutouts in Games 6 and 7) to reach the World Series. 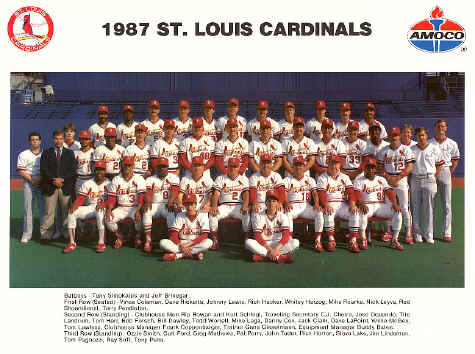 Sadly that series ended like the one two years before, although the Cardinals took a different route to get there. In the first Series where the home team won every game, the Cardinals returned to Minneapolis with a 3-2 lead but lost Games 6 and 7. Even more excruciating, the Cardinals held early leads in both those games (5-2 after 4.5 innings in Game 6, and 2-1 at the same point in Game 7) but could not hold off the Twins. It would be their last World Series appearance for 17 years.

The 1987 team was also Herzog’s last foray into the post-season as a manager. The 1989 edition scrapped and clawed, but were unable to catch the Cubs. From there the club entered a mini-Dark Age of mediocre teams and bad personnel decisions. But like the Phoenix, the Cardinals would rise from the ashes of those early 90’s teams. Hiring Walt Jocketty before the 1995 season signaled the end of bad personnel decisions. Hiring Tony LaRussa before the 1996 season foretold the end of mediocre play on the field. The Cardinals surprisingly won their division in 1996, and although they sank back into mediocrity from 1997-1999, the acquisition of Mark McGwire helped keep fans interested. Once the new millennium started, the Cardinals embarked on a period of sustained superior performance unprecedented in Cardinal history.

Those of us who lived through that 1985 World Series will never forget it, but it did not haunt the Cardinals like, for instance, trading away Babe Ruth seemed to haunt the Boston Red Sox. The Cardinals recovered, and ultimately returned to their rightful place among the National League’s elite teams.