Outside the city limits of Kansas City, the 1985 World Series is primarily remembered by a single play: “The Call.” Anyone reading this blog knows the well documented history of Don Denkinger and how his safe call in the bottom of the ninth of Game Six altered baseball history. The magnitude of the play was documented in this archived MLB.com article on the fateful October 26th.

“One call, that’s all. When fans reflect on the all-Missouri World Series between St. Louis and Kansas City in 1985, first base umpire Don Denkinger is certain to be a focal point in the conversation.”

Emotions ran wild that night. I’m not sure anyone involved could predict how fresh the passion would still feel a quarter of a century later. This offseason the St. Louis Cardinals held a Baseball Writer’s Banquet, with Denkinger in attendance as a guest, seated next to Todd Worrell. I can only imagine what that conversation was like.

Joe Posnanski was in attendance and recalled the scene in a Sports Illustrated article, “When he was introduced at the banquet, he was booed. I suppose an announcer might call them “good natured boos.” I’m not a boo-ologist. They sounded like regular boos to me.

“There was quiet while Denkinger spoke and the quiet followed by polite applause — everyone could admire the man for appearing. But as Denkinger walked out of the Hall, I heard this exchange:

“Whatever. He still blew the World Series for us.” 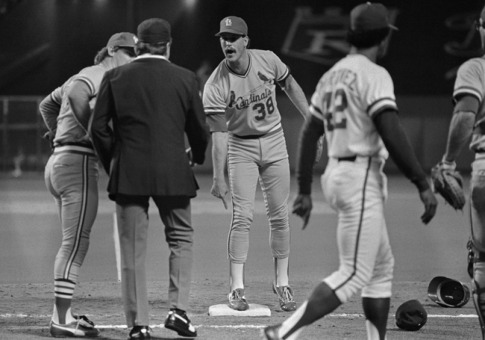 The fact is throughout history the fans and media have searched for scapegoats to give salvation to their favorite players. What is truly lost when depicting a seven game series on one call are the managers, players, and plays made.

Throughout the years fans have attempted to quantify just how costly Denkinger’s mistake was. Fellow I-70 Baseball blogger Aaron Stilley produced a well researched and interesting piece about quantifying “The Call.” For everyone involved though, it seems a play like this can’t be put into numbers. It’s an unquantifiable spark; I’m not sure how to measure momentum or confidence.

Momentum is a huge factor in every sport. Baseball provides a unique tension in between plays, in between pitches, which especially in the postseason can’t be matched. It allows everyone involved to reset and hold their breath in anticipation for what’s to come. The great thing about it, is just when you think the tension, or anxiety, is about to boil over the top, somehow it is delayed. The pitching coach takes a quick scamper to the mound, a batter steps out with dust in his eye, a pitcher steps off the slab to compose himself.

Ballplayers are taught from an early age the importance of hustle. “It’s a game of inches,” they say. The best players, or at least most respected, are those who always run out a ground ball and always back up the play.

Game Five of the 2010 ALCS between the Rangers and Yankees provides us a perfect example. The Rangers trailed the Yankees 3-2 in the top of the sixth. Nelson Cruz is on first with one dead. Ian Kinsler hits a deep fly ball to center field, forcing Curtis Granderson to range deep into the gap. Cruz tags at first and easily beats Granderson’s throw, a fairly unnoticed play by those in attendance and watching from home.

In reality, it resulted in ‘the spark’ I spoke about previously. Next, Joe Girardi calls for an intentional walk to left-handed David Murphy, who had taken A.J. Burnett deep earlier in the year. Bengie Molina steps in and torches Burnett’s gas can with a dinger landing in the left field seats. It put the game out of reach, maybe the series.

Surely Yankees fans blame Burnett. The New York media will second guess Girardi’s decision to walk Murphy and leave Burnett in to face Molina. Molina will get all the praise in Arlington, but in reality none of it would have ever happened if Cruz hadn’t tagged up.

The fact is a baseball game, even more so a series, can’t be measured on one play. Baseball is a game of constantly moving parts. So many elements go into a single play. When those plays are intertwined with the aspects of the play’s before and after the exercise in second guessing becomes futile. It is an infamous pastime for fans and the media alike, but any ball player will tell you playing the “what if?” is a sure path to an exit from the game.

This sort of perspective shift is what drives fans and the media. A devoted passion to the ballclub is what creates these scapegoats. Fans have invested their emotions so much when things don’t go their way; someone is needed to take the blame (see Steve Bartman, Jeffery Maier, Bill Buckner). These feelings go against everything players are taught.

You constantly hear coaches or broadcasters talking about how players who have made an error ‘need to move on, because the next one is coming to them.’ It takes me back to an adage I always remembered thinking about as a hitter. One’s for me, one’s for you (the pitcher), and one’s for Blue. In other words, I’m gonna get three strikes, one will be a pitcher’s pitch, one will be a boarderline call from the umpire, and one will be a pitch to hit. Obviously every at-bat is different, but this was something which helped keep my mind right as a hitter.

Human error has always been a part of the game; this is one of the things that makes baseball great. ESPN’s ‘Outside the Lines’ conducted a study of 184 games from June 29 to July 11 this season and reviewed every call made. They determined, “Of the close plays, 13.9 percent remained too close to call, with 65.7 percent confirmed as correct and 20.4 percent confirmed as incorrect.” Although it is a small sample size, this research suggests umpires miss one out of every five bang-bang plays, or an average of one and a half per game.

Denkinger may have missed the call, but odds are it wasn’t the only missed call in Game Six, let alone the entire series.

What we are left with 25 years later, is a World Series cadaver to dissect. Even though the series lasted seven games, statistically the Royals dominated. Kansas City outhit the Cardinals 68 to 40, outscored them 28-13. The Royals swiped five more bags and had an OPS over 200 points higher.
Meanwhile Royals hurlers walked ten less batters, resulting in 14 less earned runs allowed than St. Louis. Kansas City posted an insane WHIP at 0.935 over the series compared to the Cards’ 1.565, all while using five less pitchers than St. Louis needed.

So who deserves the accolades or the blame?

Royals fans will tell you the reason they won the Series was starting pitching headlined by Bret Saberhagen and timely hitting.

In the ’85 Series the three combined for only 13 hits, five runs, two RBIs, two stolen bases and one home run. The lack of production from the hitters the Cardinals relied on all season was obvious. Why not blame Willie, Ozzie, and Tommy?

Todd Worrell was the pitcher who got tagged for the infamous loss. Worrell had Jorge Orta in a 0-2 hole, but failed to put him away. Instead he caught too much of the plate which allowed Orta’s ground ball to Jack Clark. Worrell went 0-2 to the next hitter, Steve Balboni, as well. Once again Worrell made an 0-2 mistake and allowed a single to center. Eventually, Worrell fell behind Dane Iorg and gave up another rocket to right to seal the deal. Why not blame Worrell?

During the bottom of the ninth first baseman Jack Clark had a play on a foul pop-up, but misplayed the ball. Clark later admitted it was a play which he should have made. He was still seething from Denkinger’s call a few moments prior. Later in the inning with runners on first and second base, catcher Darrell Porter mishandled a Worrell delivery, causing a passed ball. The runners moved up to second and third, forcing Whitey Herzog to intentionally walk Hal McRae. Why not blame Clark and Porter?

John Tudor, the Cardinal’s ace, pitched well in his first two appearances in the series. In his Game Seven performance though, he couldn’t make it out of the third inning. Tudor walked four and gave up five earned runs, including Darryl Motley’s two run dinger in the second inning. Why not blame Tudor?

Whitey Herzog was the Cardinals’ beloved manager who had turned them into an aggressive base stealing machine. With the game on the line in Game Six, though, Herzog opted for Worrell, a 25 year old rookie who had only 21 big league innings under his belt. He also decided the best option for Game Seven was Tudor making his third start in the Series. Why not blame Herzog?

While the Royals rotation got most of the publicity for the Series, the Cardinals provided a stellar staff. St. Louis had two 20 game winners, Tudor and Joaquin Andujar. Andujar threw 269.2 innings going 21-12 with 112 SO during the regular season.

In Game Three of the World Series though, Andujar couldn’t make it past the fourth inning, giving up four runs on nine hits. This was the only start for Andujar; he didn’t see the field again until Game Seven was already out of reach. Why not blame Andujar?

During the World Series, the Cardinals were without one of their most potent weapons, NL Rookie of the Year Vince Coleman. The speedster swiped 110 bags in the regular season. On an overcast night during the NLCS though, Coleman was nearly swallowed whole by the automatic tarp at Busch Stadium.

Cardinals’ third baseman Terry Pendleton stated, “I was just turning around [when] I heard this scream and the thing just swallowed him up.”

Tito Landrum was responsible for taking over in left field. He hit .360 for the series, but couldn’t provide the spark on the base paths like Coleman could. Why not blame the killer tarp or its operator?

One play, one decision, will never decide a game, or series. Even if fans wanted to point to one play which defined the game, Denkinger’s call wouldn’t be it. Stilley concluded in “Quantifying the Call” Orta’s single caused a 22% swing in WE (win expectancy). According to Baseball Reference using WE, Orta’s single wasn’t even one of the top five most significant plays in the game. The list reads as follows:

1. Iorg’s line drive single to right field for the win.

2. Brian Harper’s single in the eight to give the Cards the lead.

5. Steve Balboni’s single to center in the ninth.

In the end, the life threatening voicemails and letters Cardinals fans provided Denkinger were uncalled for. Since then, the Cardinals have continued their storied baseball history, making nine postseason appearances and relinquishing the title in 2006. The Royals haven’t sniffed the postseason since the I-70 Series. Dwelling on one call 25 years ago is a fruitless endeavor. Cardinals fans should enjoy their past and present successes, while Royals fans deal with ‘The Curse of Don Denkinger.’

9 thoughts on “25th ANNIVERSARY: Putting ‘The Call’ In Perspective”