The man at the helm for St. Louis in 1985 was the inestimable Dorrel Norman Elvert “Whitey” Herzog, AKA ‘The White Rat,’ and inventor of ‘Whiteyball.’ Herzog had ties to Kansas City as well, having managed the Royals from 1975-1979, winning consecutive AL West titles from 76-78 but losing to the Yankees each year in the ALCS. 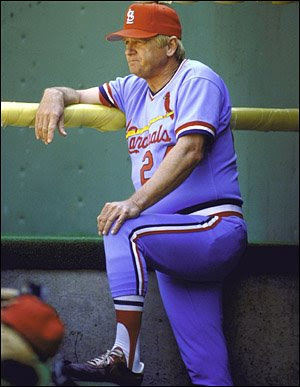 Who is Whitey Herzog? He was a left-handed outfielder and first baseman drafted by the Yankees in 1949. He never played for New York, but he did appear in parts of eight seasons for the Washington Senators (now Minnesota Twins), Kansas City (now Oakland) A’s, Baltimore, and Detroit. He was a career .257 hitter with 25 HR. After leaving the game as a player Herzog became a coach, first with the A’s, then with the Mets.

He was the third base coach for the 1966 Mets, but after that season he moved into player development and became very successful, feeding young talent to the Mets for their 1969 and 1973 NL Champion teams. He thought he had a shot at becoming the Mets manager in 1972, but was passed over by Mets chairman of the board M. Donald Grant; Yogi Berra was hired instead. Herzog left the team, signing a 2-year contract to manage the Texas Rangers.

His time with the Rangers is rather hilariously recounted in Seasons In Hell by Mike Shropshire, a former beat writer for the Fort Worth Press and Star-Telegram. Herzog replaced Ted Williams at the helm and presided over most of the 1973 season, watching the worst Texas Ranger team to play at Arlington (57-105, of which he saw all but the last 24 games). Herzog was unceremoniously dumped in favor of Billy Martin.

He managed the California Angels for 6 games in 1974 on an interim basis before being hired by the Royals for the 1975 season. After the 1979 season, he was offered the Cardinals job, replacing Kenny Boyer. Herzog managed the 1980 team for 73 games before turning it over to Red Schoendienst so Herzog could become the General Manager.

As GM he completely re-did the Cardinal roster. He jettisioned Ted Simmons, Ken Reitz and Bobby Bonds, replacing them with Darrell Porter, Tommy Herr, and Dane Iorg. He moved Ken Oberkfell from second to third. He kept Bob Forsch and Silvio Martinez but revamped the rest of the Cardinal starting rotation. The team responded, going from 74-88 in 1980 to 59-43 in 1981. One of the great injustices of the last 30 years was that ‘split season’. St Louis and Cincinnati finished the entire schedule with the best records in their respective divisions, yet neither team qualified for that year’s post-season tournament.

Following the 1981 season Herzog made his signature trade as GM in St Louis. He acquired Ozzie Smith from San Diego for Garry Templeton. Templeton had hit first or second in the lineup in 1981, and had been a major cog in the Cardinal attack for years, but was also charitably called a ‘head case.’ Ozzie had no bat whatsoever, but boy, could he play shortstop. With Smith in the fold, the Cardinals became the best team in the National League. After losing 3 of their first 4 games, the Cardinals ripped off 12 straight wins and were on their way to the World Series championship.

Herzog’s Cardinals hiccuped in 1983. By this time he had returned to the dugout full time. They were leading the NL East on 15 June when the other signature trade of his time in St. Louis occurred. The Cardinals shipped Keith Hernandez to the Mets for Neil Allen and Rick Ownbey. This one did not work out nearly as well as the Smith/Templeton trade. St Louis stumbled down the stretch, finishing under .500. They were 6 games better in 1984, but still finished in third place.

Two things happened that off-season that directly aided St Louis’ resurgence. The team traded for Jack Clark, giving them a legitimate power threat in the middle of the order. They also traded for John Tudor. Both the Cardinals and Tudor survived a slow start to become the best team (and second best pitcher) in the National League.

The 1985 team epitomized what became known as ‘Whiteyball’ – teams built on solid defense, speed, pitching, and just enough power. St. Louis led the National League in stolen bases as a team from 1982-1988. They barely hit more home runs than Roger Maris most of those same seasons (67-83-75-87-58-94-71, respectively), but won 3 NL Pennants and 1 World Series. Rival clubs would routinely water down the infield in a vain attempt to slow down the Cardinal running game; St. Louis usually responded by running over those teams.

Herzog would return the the World Series in 1987 but lose again in 7 games, a Series notable as the first one in which the home team won every game. His last hurrah as the Cardinal manager was the 1989 season. That team scratched and clawed all season, rising to within a 1/2 game of the East-leading Cubs on September 8 1989. The following day they could not protect a 2-1 lead in the eighth (aided by a Lonnie Smith error in left field on Dwight Smith’s single), lost 3-2 in 10 innings, then went 0-5-1 in their next six games to fall out of contention for good. Herzog resigned as manager a third of the way through the 1990 season.

Many in St Louis still look back fondly at those 1980s teams, teams Herzog put together and managed. It was the best period of sustained Cardinal excellence (in terms of NL Pennants) since the 1960s, but done in a way that reminded many an older fan of the 1940s ‘Swifties’ teams. Whitey Herzog casts a long shadow around the Gateway City, as every manager (including Tony LaRussa) has discovered.

Herzog was elected to the Baseball Hall of Fame in 2010, and his number retired by the Club following his induction.

For more on Whitey Herzog we suggest You’re Missin’ a Great Game by Herzog and Jonathan Pitts, and Peter Golenbock’s The Spirit of St. Louis.