Dick Howser is remembered with great fondness by fans in Kansas City, where his time in the big leagues began with the Athletics and ended as perhaps the Royals’ greatest manager. Howser skippered some great Royals teams between 1981—86, and is best remembered for guiding the club to their only championship. 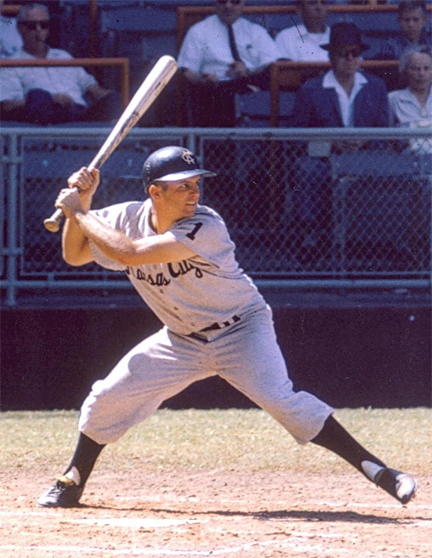 Richard Dalton Howser was born May 14, 1936 in Miami, Florida. He played college baseball at Florida State, where he hit .422 in 1956, and became the school’s first All-American in 1957 and again as a senior in ’58. After graduation, he signed with the Kansas City Athletics. Howser toiled for three seasons in the A’s minor leagues before making the big club with a splash in 1961. The scrappy shortstop stole 37 bases and was only caught nine times. He got on base at a .377 clip with an OPS of .739 (98 OPS+). In the field, Howser was rung up for 38 errors. After just 59 games with the A’s, manager Hank Bauer named Howser the captain of the team.

“Frankly, I was just trying to keep a job in the major leagues,” Howser said. “My first reaction was an uneasy one. I thought they might be expecting too much from me. I went to our owner, Mr. Finley, and to Hank also and discussed the appointment with both of them. They didn’t expect me to do anything different than I had done in the first 59 games. They wanted me to continue hustling and to set an example. They really seemed impressed with my hustle.”
—The Kansas City Athletics by John E. Peterson

He was named to the 1961 All-Star team and lost the official Rookie of the Year Award by one vote. The Sporting News named him top AL rookie. It was a promising start, but Howser was unable to put up another season quite as successful. Injuries took a toll on his playing time. In 1963 the A’s sent him to Cleveland, where he had a couple of productive years before being shipped to the Yankees prior to the 1967 season. He was done as a player after 1968, but remained with the Yankees as third base coach between 1969—78. Howser left the Yankees for the 1979 season to coach college ball for his alma mater, and led Florida State to a 43-17 record.

The Yankees lured him back for the 1980 season with an offer to manage. The rookie manager piloted the Yankees to 103 wins and a postseason appearance against the Kansas City Royals. The Royals swept in three games, and the fickle George Steinbrenner forced Howser out. The Yankees’ loss was the Royals’ gain. KC tapped Howser to manage the Royals in the middle of the ’81 season.

“Dan Quisenberry called him a distant general—he wasn’t much for strategy or heart-to-heart talks—but he had dignity. He had soul. He told those Royals they were the best team, and they believed him.”
—The Good Stuff by Joe Posnanski

Howser and the Royals found themselves in the ’81 postseason after just 33 games together, but they were swept by the A’s. After two straight second place finishes, the ’84 Royals returned to postseason play, but Howser fell to 0-9 as a playoffs manager when they were swept by the Tigers. The ’85 team returned to the playoffs, but dropped the first two games of the ALCS to Toronto. Howser had now lost all 11 postseason games he had managed. But the Royals rallied to take the series from Toronto, and found themselves in the franchise’s second World Series. But the Royals had their backs against the wall again after dropping three of the first four games to St. Louis. 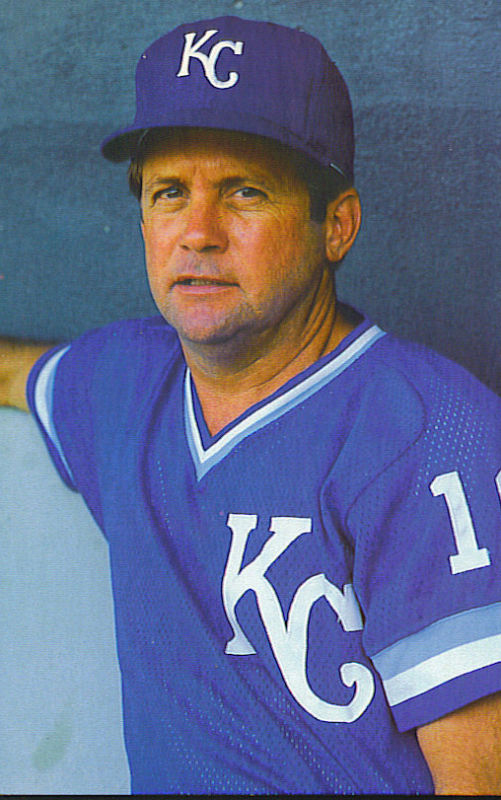 “He never had a moment he felt defeated. His favorite line was, ‘We’ll get it done.’ You’re talking about a cool guy. You never saw him sweat.”
—Frank White, July 12, 2004 Kansas City Star

Howser’s previous playoffs troubles were forgotten when the Royals clawed their way back to take the championship. Royals players give Howser a tremendous amount of credit for his role in the title. His quiet confidence seemed to transfer to the players. He was not meddlesome. He filled out the lineup and let the players play, and the Royals loved playing for him.

“I played for some good managers, but Dick was great. He was so honest with you. If you messed around or did something wrong, he was in your face. But he allowed you to play if you were out there and ready, and he knew you were going to give your best. He was a confidence-builder.”
—Mark Gubicza, Denny Matthews’s Tales From the Royals Dugout

The elation of the championship quickly turned to horror. The team noticed something amiss with Howser during the first half of the ’86 season. Denny Matthews writes in Tales From the Royals Dugout that Howser, always sharp, was suddenly forgetting recent events and mixing up names. At the All-Star game that year, Howser couldn’t remember who the starting pitcher was going to be for his AL squad. He confused Frank White for Lou Whitaker in the dugout. Two days later, the terrible diagnosis: brain cancer. The All-Star game would be his last as a manager. (White helped ensure Howser was victorious by blasting a home run.)

The Royals did not name a permanent replacement, leaving the door open for Howser to return if he could. (Mike Ferraro took the helm for the second half of ’86.) After undergoing treatments, Howser attempted a comeback during 1987 spring training, but his return was short lived. Howser simply didn’t have the energy. He passed away months later on June 17 at Kansas City’s St. Luke’s Hospital at just 51 years of age. The Royals held a ceremony for Howser two weeks later in which they inducted him into the team’s hall of fame and made his #10 the first retired number in Royals history.

Because Howser’s time was cut short, it is easy to forget that he has managed more Royals games than anyone else. His .544 winning percentage with the team is bested only by Whitey Herzog and Jim Frey. The Dick Howser Trophy was initiated in 1987 and is awarded to the country’s best collegiate baseball player each year. Florida State renamed their baseball stadium in Howser’s honor in 1988, and his #34 is the only retired number in their baseball program. The Royals again honored Howser with a statue at Kauffman Stadium that was unveiled in 2009.