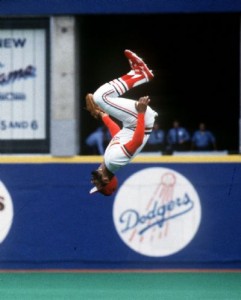 As you know, this entire week is being dedicated to the 1985 “I-70 Series” that Cardinals and Royals fans will, for positive and negative reasons, never forget. It was a series full of headlines, and I won’t even get into the obvious one.

The series is one that most Cardinal fans would like to forget, but nobody aside from Don Denkinger (oops – I said it) had a worse seven games than Ozzie Smith.

Fortunately, I was not around to experience the frustration of that unforgettable series for the Cardinals. I was born in 1992, and actually was in attendance for Ozzie Smith’s final MLB game in 1996. I was three years old and did not know the significance of that game until later on in my life.

Since I was not around to watch the majority of his career, most of my memories of “The Wizard” come in the form of his emotional Hall of Fame speech in 2002. Of course I know him as the remarkable shortstop he was, but I was not lucky enough to get the privilege of watching him play baseball in the prime of his career. His 13 consecutive Gold Glove Awards, 15 All-Star selections, 2460 hits, and 580 stolen bases clearly speak volumes, but I have a feeling that Smith’s play was far more than that. I cannot say for certain, but I bet if you ask anybody alive in Ozzie’s playing days, they’ll tell you that his performance on the field was more than numbers can indicate.

The Wizard was traded to the St. Louis Cardinals in 1982 and immediately made an impact. He made his second All-Star appearance in that first season with the Cards, but I doubt many fans knew what they were going to get out of Smith in the next 15 years. While his first three seasons in St. Louis were impressive, especially in the field, it was in the 1985 season when Ozzie became an offensive threat as well.

Although it was not publicly known until after the season, Smith did all of that even after sustaining an impingement in his right shoulder during July of ’85. As the season progressed, it developed into a torn rotator cuff, which typically requires surgery and extensive rehab. Instead, The Wizard let it heal “naturally” and he continued to play. Not only did he play, he played 158 games, plus a historic postseason.

The play most often thought of when Ozzie Smith comes to mind is the game-winning “Go crazy, folks!” home run in Game 5 of the NLCS. Smith batted left-handed against Tom Niedenfuer with one out. He had never hit a home run in his previous 3,000+ left-handed MLB at-bats, but The Wizard pulled a fastball down the right-field line for a walk-off home run.

His defense was, as always, rock-solid in that series against the Dodgers, but it was his offense that surprised most. In 27 plate appearances, Smith had a slash line of .435/.500/.696 with four runs, one double, one triple, one home run, three RBIs and 16 total bases. He was automatic. Smith was named the Series MVP, but it all quickly changed.

Even though his offensive game was probably the best it has ever been in that ’85 NLCS, Smith suffered a drastic drought in the World Series against the team on the other end of Interstate 70. While he seemed to hit anything that came his way in the Championship Series, Ozzie went 2-for-22 in the World Series with only two total bases, compared to 16 in the NLCS.

As Ozzie Smith fell apart and seemed to disappear (at the dish at least) in the World Series, so did the Cardinals. Maybe there’s something more to this than meets the eye. Ozzie Smith was the life force of the entire club, and what happens when that is taken away?

Despite his usual defense play, Smith had a disastrous seven games at the plate, and so did the Cardinals. You can blame Denkinger all you want, but he cannot be held accountable for the entire series. The Cards didn’t show up when it mattered most. I am by no means saying the series was lost because of Smith. It definitely was not. I just find it interesting how, as Smith fell, the team fell. Ozzie Smith was the St. Louis Cardinals, and he wasn’t his normal self in that series. Neither were the Cardinals.