I was only a few months old when the I-70 Series happened, but as a baby I was in attendance at a few of the games. Of course I have no memory of the series. I do, however, remember George Brett.

My memories are not from ’85 but from a time when the Royals were still winners. A time when the stadium was always full. A time when having season tickets was something to be proud of. So, instead of a stat-filled recap of Brett’s career, I am going to focus on what I remember of Brett as a player.

For most people under the age of 30, George Brest is best remembered as the raving mad man who rushed onto the field ready to kill someone during the infamous Pine Tar Incident. Everyone remembers that image of George Brett, that image of pure emotion, pure passion for the game, and a pure reaction. 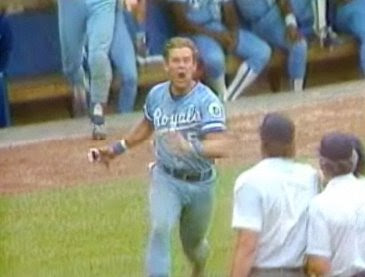 I remember George Brett not as my favorite Royal, but as the guy who went out there and did the same thing every single game. He got the clutch hit, made the hard throw, and just pretty much made the extraordinary look routine every night he took the field. I remember not wondering wether George would get a hit, or holding my breath on the long throw from third, because I always knew he would come through when the team needed it.

I also remember Brett being the guy everyone loved, but at the same time hated. George Brett was the face of the team, the heart of the team and the leader of the team in the fans’ eyes. People knew where he lived, where he ate, who he hung out with. His life and personality were always a topic of conversation. Every company wanted George Brett to have their product in his hands.

George did exactly what everyone expected him to do in 1985. He tore the cover off the ball in the regular season, blasting 30 home runs; he became the MVP of the 1985 American League Championship Series; and he drove the ball all over the field in the World Series, including a four-hit performance in Game 7. He truly lived up to the legend.

George Brett will forever be remembered for that magical Fall 25 years ago when he led the Royals to a world championship.