The Cardinals had a long road to the World Series, where they arrived the heavy favorites to beat the Royals. While the Cardinals’ pitching staff was the driving force behind the team, the offense was impressive. Utilizing “Whiteyball” to the full capabilities, the team was built on speed, defense and fundamentals. Today, here on I-70 Baseball, we break down the starting eight fielders from the 1985 World Series.

It was during that road to the World Series that the Cardinals’ lineup experienced a major loss when a freak accident with a tarp brought an end to the season for Rookie Of The Year Vince Coleman. That left the Cardinals to turn to a man who many people considered to be faster then Vince Coleman to lead off games for them in the Fall Classic. 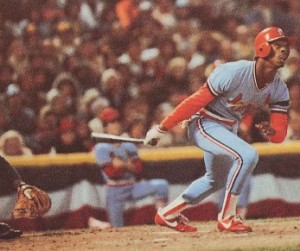 1. Willie McGee, CF
Willie McGee would patrol the astroturf of Busch Memorial Stadium in center field in Gold Glove style and take the lead off position for the Running Redbirds. McGee was no slouch, he was the National League MVP and Batting Champ in 1985, hitting .353 and leading the league in hits (216) and triples (18).

2. Ozzie Smith, SS
Following McGee in the lineup each night was the Cardinals’ annual Gold Glove winner and All Star shortstop Ozzie Smith. Ozzie would not realize his full potential with the bat for another few years, but his .276 average did not reflect his ability to produce productive outs, moving runners along and setting up the middle of the order with opportunities to drive runs in with minimal effort.

3. Tommy Herr, 2B
It was the Cardinals’ second baseman and number three hitter, Tommy Herr, that showed this theory to be effective. While only hitting eight home runs, hit 38 doubles and post a .416 slugging percentage, Herr still managed to drive in 110 runs behind the top of the order.

4. Jack Clark, 1B
The cleanup spot in the Cardinals’ batting order was manned by the only true “power hitter” on the roster, their first baseman Jack Clark. A .281 batting average, .502 slugging percentage and 22 home runs could only net Clark 87 runs batted in. The third and fourth spots in the order were indicative of Whiteyball at its greatest.

5. Tito Landrum, LF
The number five spot in the order would be patrolled by the left field replacement for Vince Coleman in veteran, home-grown Tito Landrum. Landrum’s season in 1985 was that of a bit player, hitting .280 with four home runs and 21 runs batted in over 161 at bats.

6. Cesar Cedeno, RF
Across the field from him in right field was a late addition to the Cardinals roster, veteran outfielder Cesar Cedeno. Cedeno came to the Cardinals in late August in a trade from Cincinnati and went on an immediate tear. In his only 28 games as a Cardinal, Cedeno would hit .434 with 6 home runs and 19 runs batted in. He would hit sixth throughout the world series.

7. Terry Pendleton, 3B
The offensive threat started to fizzle as the bottom of the Cardinals’ order came to the plate. Terry Pendleton would hit seventh and play third base. While years later he would dominate and win an MVP award, his second year in the league would come in 1985 and be largely unimpressive. He would hit .240 with five home runs, though he would scrape out 69 runs batted in.

8. Darrel Porter/Tom Nieto, C
Pendleton would give way to a platoon at cather hitting eighth. Darrel Porter and Tom Nieto would share the duties behind the plate, while neither of them doing it impressively from the offensive standpoint. Porter would close out the 1985 regular season hitting .221 with 10 home runs and 36 runs batted in. Nieto would not fare much better, hitting .225 with no home runs and 34 runs batted in.

The wild card from the bench was young Andy Van Slyke, who would split time in right field throughout the season and be a late inning replacement in the World Series. Van Slyke would hit .259 with 13 home runs and 55 runs batted in over the course of the season, seeing time at all three outfield positions and first base and stealing 34 bases, just for measure.

The Cardinals’ lineup was poised to take on the Royals in the World Series and matched up with the team from the west side of the state very well. Time would tell the 1985 team just why the games are played on a field, and not on paper or in articles.

Tomorrow: A look at the Cardinals’ pitching staff in 1985.