I started blogging because I like talking baseball. One of the unexpected benefits of that love is the occasional opportunity to review books on baseball. Recently I was asked if I was interested in receiving a copy of Roger Maris: Baseball’s Reluctant Hero, by Tom Clavin and Danny Peary. Of course I was.

One could sum up what I knew about Roger Maris (before reading this book) in about three sentences. He broke Babe Ruth’s single-season HR record in 1961. He was a Yankee in his prime and won 2 MVP awards. He spent the last 2 seasons of his career with the St Louis Cardinals. During the summer of 1998, his family was center-stage while Mark McGwire and Sammy Sosa chased, and eventually broke, his record.

I read the 393-page book during a recent business trip. It was a surprisingly easy read. The main part of the book covers Maris’ 1961 season – for which he is most famous today – but the authors try to explain why Maris treated the media the way he did during that season by providing some insight into his childhood and family dynamics. Roger Maris was always a closely guarded man, not sharing personal details with just anyone, and certainly not with the media; his experiences as a youth, as well as a strong family tradition of being secretive, shaped that part of his personality.

Clavin and Peary make a reasonable case that Maris’ reticence, coupled with a new, younger breed of sports reporter who felt largely unencumbered by their predecessor’s code of keeping baseball player’s dirty laundry out of the press, were the causes of virtually all Maris’ trouble in New York. Roger did stick his foot in his mouth (and flash a prominent digit) on a couple of occasions, which didn’t help him, and the press was all too ready to publish those quotes/actions far and wide. No wonder Maris was so ready to get out of New York by 1966.

The book reminds the reader Roger Maris was much more than a home run hitter during his career. It talks about his defense (including his famous play in Game 7 of the 1962 World Series), his baserunning, and his all-around game instincts. 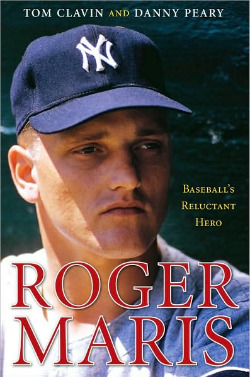 It also reminds us of what the game used to be like. Two separate leagues, with two separate styles of play, where players rarely jumped leagues and most major leaguers learned about the other league’s players by reading about them in the press. It’s interesting most of the 1967 Cardinals thought they knew what kind of a guy Roger Maris was based on the descriptions of him in the newspaper. They were surprised when Maris the man turned out to be nothing like the Maris they had read about.

Once Maris hangs them up following the 1968 season, Clavin and Peary take us rather quickly thorugh the remaining years of his life, touching on his Old-Timers Day appearances, his charitable work, and his business venture as a beer distributor for Anhieser-Busch in the Gainesville Florida area. The authors also talk about the effort George Steinbrenner made to repair the burnt bridges between Maris and the Yankee organization. Maris vowed never to go back to Yankee Stadium after he left the team in 1966. Steinbrenner believed a grave injustice had been done to Maris because of how he had been treated while a Yankee and really worked overtime to fix it. The description of Maris’ first appearance in the House that Ruth Built after he retired (April 1978) may bring a tear to your eye.

I try to keep it simple with book reviews. Was it well-written, did I learn something, and do I recommend it.

Was it well-written? Yes. As mentioned, it was an easy and informative read. I did get a little lost in the beginning when all the relatives were introduced and described. A flow chart would have been a nice touch. Then again, I have trouble following all the ‘begats’ in the book of Genesis, so that’s more a knock on me than anything.

Did I learn something? Yes. I learned a ton. Some examples:

Do I recommend it? Yes. I found it well written and well researched. I was entertained, and the book made two cross-country flights much more enjoyable, not to mention pass much faster than they typically do.

Disclaimer: The author received a complimentary copy of this book from Simon and Schuster, Inc., and received no compensation for this review.