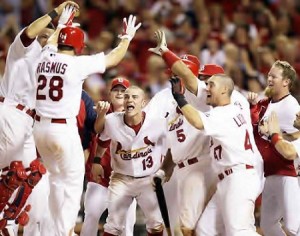 In a season full of controversy, one of the biggest stories of the summer was what happened between Colby Rasmus and Tony LaRussa in August. Much has been made of the situation in the past couple months, and I hate to bring it up once again, but I feel the need to stress my standpoint on the issue.

We all know the story and how it all allegedly went down, so I will not waste everyone’s time with explaining how and why it all happened. However, I believe some fans need to step back and look at the whole picture before jumping to conclusions about Colby Rasmus and how he fits into the club’s future plans.

Rifts between players and LaRussa aren’t anything new. Actually, it seems to happen very often. Too often. Scott Rolen is the obvious one, but it is the Anthony Reyes situation that sticks out to me because it is very similar to Rasmus’. I-70’s Michael Metzger compared the two in September, and if Colby Rasmus continues to follow the same path that Reyes took, the St. Louis Cardinals could become much worse.

If you remember, Anthony Reyes was one of the top pitching prospects in the majors in 2005, but struggled with the big league club in 2006-2008. Reyes’ problems with management became public starting in the first half of the 2006 season, and they continued to progress until he was traded before the trade deadline in 2008.

Now, a very familiar thing is happening with Colby Rasmus. As you all know, Rasmus was the Cardinals’ number one prospect in 2007 and 2008. Unlike Reyes, Colby has had success and has become one of the best center fielders in the MLB. Nonetheless, Rasmus is not happy with the way he is being treated by management, but who can blame him?

Tony LaRussa and the rest of the coaching staff has, for lack of a better term, screwed around with him all season. Rasmus is one of those guys that needs to be in the lineup as often as possible. Instead, Tony decides to bench him for guys like Aaron Miles, Skip Schumaker, and Jon Jay. I am perfectly fine with those three being role players, but when they are taking away at-bats from the third best hitter on the team, something is wrong.

I honestly cannot blame Rasmus for being upset. If I was him and my manager wouldn’t play me, I’d want to find a new one. It is that simple. Some St. Louis fans were very offended by Colby reportedly asking for a trade. How is that fair? We need to remember that he did not want out of St. Louis. What he wanted was to get away from a manager who benches him for any reason he can find or, in some cases, make up. How can fans blame Rasmus for wanting a manager who supports him? I know I’m not going to. I would feel the same way if I was him, and so would you.

Management has misused him time and time again. Maybe, just maybe, he wants a chance to play every day. Maybe he wants a manager who believes in him. He’s one of the best outfielders in the game and his manager doesn’t have his back? What’s up with that?

I’ve heard the term “whiner” when describing Colby Rasmus, but he is not a whiner. He just wants to be utilized. The Cardinals aren’t making the most of his talent, and there are plenty of teams that would love to. Don’t blame Rasmus for wanting that.

Unfortunately, it is becoming more and more clear that the Cardinals may very well part ways with Rasmus, despite General Manager John Mozeliak assuring fans that it would not happen. Over the past week, there have been several reports indicating that a few teams are preparing to “make a strong push” for the center fielder. The teams interested include the Atlanta Braves, Toronto Blue Jays, and Arizona Diamondbacks, among others. Of those three, non have a center fielder who can replace Rasmus. In fact, there may not be an outfielder in the MLB who can realistically replace Colby.

Rasmus is 24 years old, has 25-30 HR potential, the Cardinals are paying him the league minimum, and they have him locked down until after the 2015 season. I think it goes without saying, but I’ll say it again anyway: the Cardinals are much worse without Colby Rasmus.

How is the front office going to replace a young, extremely low-cost center fielder with tremendous upside? They can’t. Offensively, he has been golden. Sure, he strikes out more than most, but his plate discipline and patience will improve with age.

In 2010, Rasmus had a slash line of .276/.361/.498 with 85 runs, 23 home runs, and 66 RBI in 144 games. What impresses me the most is his line drive and isolated power (ISO) rates. He hits a line drive 22% of the time. To put that into perspective, only seven outfielders in the league have a higher LD%. Of those seven, only three are 25 years old or under. His ISO is even more impressive. ISO is basically just a number that shows a player’s true power, and anything above .200 is considered very good. Rasmus’ 2010 mark was .222. Again, only seven outfielders had a better mark, but only two were 25 or under.

Defensively, Rasmus has had a few lapses, but all in all he is a very good fielder. To prove it, just take a look at his 11.752 zone rating. Out of all the center fielders in the league, nobody’s zone rating is higher. Not only is he a good fielder, he has more range than anybody at his position.

So before you call him out and demand that he gets traded, please remember that Rasmus simply cannot be replaced. He needs to be one of the cornerstones of the franchise, and if Tony LaRussa doesn’t like that then somebody needs to remind him that replacing an old manager is much easier than replacing a young, upcoming star.