Can you name the starting pitcher who put up the following numbers with the Royals? 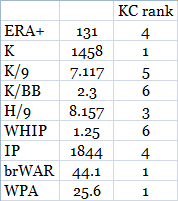 Most strikeouts in club history, fourth most innings pitched, most win probability added, and most Baseball-Reference wins above replacement (brWAR). Another clue: he’s not yet a member of the Royals Hall of Fame.

The answer is Kevin Appier. He is clearly one of the all-time Royals greats, and though he has only been retired for four years, his induction into the Royals Hall of Fame is due. Hopefully next season Appier will take his rightful spot with the current cast of starting pitchers in the Royals Hall: Bret Saberhagen, Mark Gubicza, Dennis Leonard, Paul Splittorff, Larry Gura, and Steve Busby. 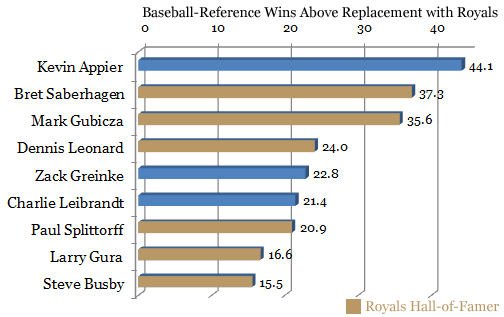 Robert Kevin Appier was born in Lancaster, CA (on the outskirts of Los Angeles) in 1967, and was drafted out of Lancaster High by the Royals with the ninth pick of the 1987 draft. Appier was sent to the low-A Eugene (OR) Emeralds, where he managed to get in 15 starts before the end of the 1987 season. The Royals moved Appier up to the high-A Baseball City (FL) Royals to start 1988, where he made 24 starts before being promoted to the AA Memphis Chicks in time for three starts. Combined, he had a 2.64 ERA. The next season, Appier started at AAA Omaha, where he spent most of the year.

He pitched well enough that he got the call to make his big–league debut on June 4, 1989 in Anaheim. It was trial by fire. Appier drew a tough opposing pitcher for anyone, let alone a fresh-faced rookie: hurling for the Angels was 38 year-old Bert Blyleven, pitching in his 20th MLB season. Adding to the pressure, the Royals were trying to catch the Angels in the AL West race, trailing them by 3.5 games heading into the contest. The kid and the veteran swapped zeros for three innings before the Angels got to Appier for two runs in the fourth inning. Blyleven cruised through eight innings without yielding a run, and Appier exited after the sixth inning down 0-4. In the top of the ninth, Bo Jackson took Blyleven deep, but the game was lost 1-4. Appier stuck with the big club for a month, making a total of five starts and six appearances. He got roughed up while trying to adjust and was sent back down to Omaha with a 9.14 ERA.

He started 1990 back in Omaha, but returned to KC quickly, and began a seven year reign as a linchpin in the Royals’ rotation and as one of the elite pitchers in baseball. He was a revelation in 1990, posting a sparkling 2.76 ERA over 32 games. According to brWAR, he was far and away the best AL rookie, but finished third to Sandy Alomar and Kevin Maas in rookie of the year voting. Appier didn’t slow down for the next six seasons. His consistent excellence from 1990—97 is stunning. He never had an off-year. His ERA was well above average every one of those seasons, his ERA+ always landing somewhere between 121—179. His strikeouts per year ranged between 127—207, while he walked between 54—80. Saberhagen and Zack Greinke both have put up better individual seasons than Appier, but no Royals pitcher can match the sustained excellence of Kevin Appier between 1990—1997.

Two seasons do stand out: 1992 and ’93. He probably should have won the Cy Young in ’93, but pitcher wins were sacred, and Jack McDowell won the award for reaching 22 wins in spite of a 3.37 ERA. Appier and Greinke could start a support group: According to the August 6, 1999 Kansas City Star, “In 38 of (Appier’s) 89 career losses, (the Royals) scored zero or one run for him.” He fell short of such milestones as a no-hitter or a Cy Young. He made just one All-Star game. (He threw two perfect innings in the ’95 game; Tony Gwynn said afterwards, “I’ve never seen anyone throw like Kevin Appier. The ball is cutting, darting, running. He’s tough.”—July 12, 1995 Star.) He just pitched extremely well for a long time for bad Royals teams. His remarkable durability finally took a hit before the ’98 season when he fell off his porch, resulting in surgery on his collarbone. He only pitched 15 innings in ’98, and was never quite the same pitcher again.

By 1999, the losing had worn Appier down. After a rough outing in late July, Appier blew off some steam 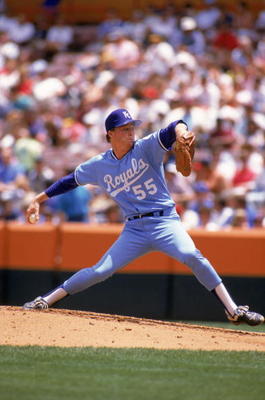 to reporters: “I’d like to have a chance to (contend). But if ownership and (the) general manager, if that’s not their goal, then hopefully they’ll get rid of me…If we’re going to be a much improved team, then I’d like to be a part of it. But if they’re going to continue with the same…they’ve been doing for the last seven years, then get rid of me.”—July 22, 1999 Star. Appier got his wish soon after. Royals GM Herk Robinson flipped him to Oakland for a trio of young pitchers (Blake Stein was the only one to do much of anything for the Royals). Appier would pitch for Oakland, Anaheim and the Mets between 1999—2003, and reached the postseason in 2000 and ’02. He earned a championship ring with Anaheim in ’02. The Angels waived the 35 year-old Appier in 2003, and the Royals, in the midst of a division race, signed him in August hoping he still had some magic left in the tank. For one night, it looked like he did—Appier blanked the Yankees over his six innings on August 13. But it was his last hurrah. He appeared in just four games for KC in ’03 and two in ’04 before the Royals released him. He attempted to come back on a minor–league contract with the Mariners in 2006, but finally hung it up when he was released in June of that year.

The Royals and their fans may not have many fond memories from the 1990s, but Kevin Appier’s durability and excellence were a constant positive force. Appier deserves a night in his honor at Kauffman Stadium and induction into the Royals Hall of Fame, and soon.

Aaron Stilley does the blog thing here and makes the tweeties here.