The National League this year has shown some diversity amongst the teams. Highly competitive races came down to the last few weeks of the season, highlighted by three teams and the men that guided them. In my mind, the top three managers to be considered for the award are listed here….

I know, as a Cardinal person I should not even utter his name. However, all things considered, I think you have to acknowledge the job that Baker did in Cincinnati this season with a team that most did not expect to even finish above .500. I am personally not a fan of his management style, and honestly should probably put Walt Jocketty’s name in parenthesis behind Baker’s, but all things considered he took a team that should not have been in playoff contention and turned them into division champions.

The only thing keeping Baker from climbing higher into this list is the team’s collapse down the stretch. A team that had every opportunity to bury the Cardinals and seal the division very early on, the Reds resembled the World Series Champion Cardinals from 2006 that were known for “backing into” the playoffs. The Reds capitalized more in the month of September from the Cardinals inability to win then they did from their ability to do so.

Speaking of teams that everyone picked to lose, the Houston Astros were picked by many to challenge the Pirates for the opposite end of the division race. A very young team that had some financial problems with veteran stars, the Astros were viewed as a franchise that was in turmoil. Locked into rebuilding with very talented youngsters, the team was mired in the back end of contracts to star players that needed to be replaced.

Brad Mills took a young group of players, watched talent like Roy Oswalt and Lance Berkman be traded away, and somehow put together a season that suggests that the Astros could be competing sooner rather than later for the division title. A team that most picked to finish dead last was capable of posting a record that ended a mere 10 games below .500. Mills was rewarded with an extension to his contract, showing faith in his ability to lead the players through the remainder of the rebuilding process. With Mills at the helm, the rest of the National League Central should take notice of the Houston Astros. 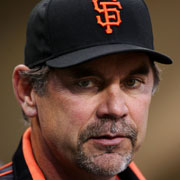 There are teams that overachieved and there are teams that went above and beyond. Bochy took a Giants team that many picked to be contenders, but not playoff ready, and has led them into the playoffs and past future Hall Of Fame manager Bobby Cox’s Atlanta Braves and into the National League Championship Series to take on baseball’s latest dynasty, the Philadelphia Phillies.

Most pundits did not think the Giants were quite “there” at the begining of this season. But behind Bochy’s leadership, the team leveraged great play from rookie cornerstones and solid play from veteran leaders to put themselves in a postion to steal the Postseason away from everyone involved.

There you have it, my picks for the Connie Mack Award for the Baseball Bloggers Alliance.