The playoffs have started this week but do I get to see the Cardinals play? NO! I do not get to see the Cardinals play unless I am watching a pro-am golf outing for charity. Not making the playoffs was not what this team was made to do. It was not what the future of the farm system was traded for over the last three years. This season was the year that the Cards were to make a run to prove to Sir Albert that he needed to sign that long term discounted deal. This year turned out to be a year where everything we thought we knew was thrown out the window leaving us dazed and more than confused as we sit on our sofas watching that damn pro-am. This team CHOKED.

Before the All-Star Game I would have said that Rasmus and Freese had finally proven themselves as valuable members of the team. Dare I even say a bright spot. I would have also never have thought that Tony LaRussa might not be managing in St.Louis but still be managing. The words “complete rebuild” would have never have been on my tongue. Now, as I sit on my sofa wondering how much a ticket to see Sam Bradford’s 2-2 Rams (who saw that coming) is, I am wondering if it is time to blow it all up and rebuild on the ashes of old. 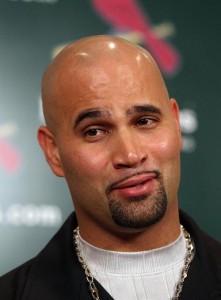 There is no easy answer as to why this team is teeing up instead of playing in the playoffs and that is why this off-season could be the beginning of a very serious end. Someone has to take the fall for this season. The question is, can one person shoulder all the blame? This team’s epic failure this season can not placed on one person, one event, or even one month. The entire team has to take ownership for their part in this season. The only problem is that one of these men will have to no longer be a part of this team once they finally accept their part of the failure. The last and most important person to finally accept blame is upper management. Everyone from the GM to the owners have to look in the mirror and admit we swung and missed on a bunch of decisions this year before any off-season progress can be made. Once this ownership of failure happens, the team as a whole can begin to answer the question – how do we turn this around?

The simple answer is to fire the manager. This is done every year in baseball. But baseball is probably the only sport where a manager/coach can play little to no role in a great team. Other sports like basketball and football place the play calling and thus the overall flow of the game on that man. Baseball on the other hand allows a manager to sit back most of the game not really making any major game calls. It is this fact that leads me to believe that a changing of the guard in St.Louis will signal a major overhaul of the entire roster. It is hard to say it when you have an All-Star Roster like the Cardinals do but if LaRussa goes, no one is safe. The departure of LaRussa will send rippling changes throughout the entire roster both on the coaching and player side.

If LaRussa comes back for a 16th season this means that the team will have to make one major move in the off-season. This move will not be a major roster rebuild but could be, and should be, a blockbuster event. LaRussa has to know that a shock to the status quo is needed if he is to return. This move could be as simple as a major spending spree in the offseason or the adding of true winner like a Derek Jeter, but most likely it will mean trading away one of the stars of the pitching staff to bring back that spark that the team has been missing.

The only sure thing is that doing nothing is not an answer if this team wants to be on the field this time next year. Changes are coming fast but two or three bad changes in a row can take this team from a place free agents flock to a place where a bag of money still will not get you a meeting with a Boras client.