On October 3rd, Jeff Suppan made his last 2010 start for the St Louis Cardinals. It may also have been his last start in the majors. Suppan was a key figure in the last Cardinal title run, so as he rides into that sunset here’s an appreciation of his time as a Cardinal.

Suppan was drafted right out of high school in 1993 (second round), but by the time the Cardinals signed him as a free agent 10 years later, he had bounced around on 4 different teams. He was primarily known as an innings eater, having thrown 200+ innings in his previous 5 seasons. He would thrive, however, in St Louis. 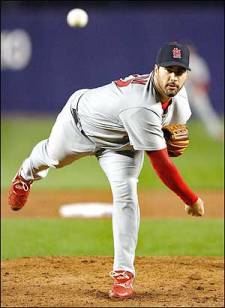 Based solely on won/loss record, 2004 was the finest season of Suppan’s career. The most remarkable thing about this season was his success on the road. The Cardinals lost only 2 of his 14 road starts; in one of those losses, he allowed 1 run in 8 innings. He continued his magic in the post-season, beating Los Angeles in Los Angeles to clinch the NLDS. The only team to best him when the Cardinals were a visitor turned out to be Houston. They handed him his only regular season road loss on 29 Sept, then beat him in NLCS Game 3 17 days later. Suppan also started Game 7 of that series, and appeared to be on his way to a bitter loss until Jim Edmonds’ spectacular diving catch robbed Brad Ausmus, snuffing out a second inning rally. Suppan held Houston in check over the next 4 innings (1 unearned run), and the Cardinals rallied to win the game and the series.

The World Series was forgettable for Cardinal fans, and probably Suppan too, especially after he got caught off third in the third inning of Game 3 to kill a rally, then gave up 3 runs over the next 1 2/3 innings. However, his reputation as a big-game starter was beginning.

Statistically this was Suppan’s finest season. He won the same number of games as he had in 2004, but his ERA was a half-run better (his FIP was almost the same, 4.77 in 2004 and 4.53 in 2005), and his ERA+ was a career best 119 over the full season. Jeff did not post the gaudy road record he did in 2004 (9-5; how pedestrian), but his ERA improved by almost a run and a half on the road. Jeff was superb down the stretch everywhere, going 7-3 with a 2.78 ERA the second half of the season. From 31 August to the end of the season he gave up 1 ER or less in 5 of his 6 starts. He only got one post-season start – Game 4 of the NLCS in Houston – and he continued the trend, allowing 1 ER in his 5 innings. Unfortunately for the Cardinals, Brendan Backe was just as good, and the Cardinals eventually lost the game 2-1. Houston would go on to win the National League pennant.

Still, Suppan had been very good over the season, and had pitched well in his lone post-season opportunity, setting the stage for the 2006 campaign.

Suppan statistically was the second best Cardinal starter in 2006 behind Chris Carpenter. His 12 wins were second most on the 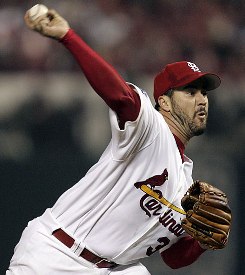 His regular season, however, is not what cemented his legacy in St Louis. It was that October. He began badly, losing the only game the Cardinals dropped to San Diego in the NLDS. After that, he became a dynamo. Suppan threw 8 shutout innings in Game 3 of the NLCS, beating the Mets and giving the Cardinals a 2-1 series lead. In Game 7, he allowed two hits, a walk, and a run in the first, then threw six no-hit innings. He did walk 4, two in a highly adventurous sixth inning which saw the Mets load the bases with one out (the other runner reaching on a rare throwing error by Scott Rolen). He struck out Jose Valentin and enticed Endy Chavez to fly harmlessly to center, ending the threat. Yadier Molina’s HR, and Adam Wainwright’s curveball, gave St Louis the win and the pennant. It is, however, no understatement to say without the start Jeff put together for seven innings, the stage would not have been set for those ninth inning heroics. Jeff was named the MVP of the NLCS for his two superlative starts.

His World Series Game 4 win is almost an afterthought, but it gave the Cardinals a 3 games to 1 lead. St Louis would win the title the next night.

Suppan would cash in on his three great years with the Cardinals, but it would not be St Louis who paid him. He signed as a free agent with Milwaukee. Sadly he did not continue to show the form he had displayed the previous 3 seasons. Ultimately he was banished to the bullpen this season, then released. He came back to the Cardinals mid-season. He didn’t recapture his 2004-2006 form, and statistically he was the same pitcher in St Louis as he was with the Brewers, but he did find a small measure of success down the stretch for the Cardinals.

Jeff is due $12.75M in 2011, with a $2M buyout clause. That is considered by many too much for the Cardinals to carry with their current roster configuration, so most expect the club to exercise the buyout. He’s pitched 15 years in the majors and is on the back slope of his career, which is why there might not be much interest in his services. Cardinal fans should remember that, for the 2004-2006 teams, Jeff Suppan was one of the most reliable starters we had, and his 2006 post-season performance made him one of the unlikeliest heroes in Cardinal history.

One thought on “Jeff Suppan: An Appreciation”