I recently took a look at the 10 best offensive seasons in Royals history using wOBA+ (click on that article for an explanation of the stat). Now I’ll turn my attention to the bottom of the list. These are players who somehow stuck in the line-up on a regular basis (400+ plate appearances) in spite of not hitting a lick. Not a single Royal cracked the top 10 in the 2000s, but this decade is well represented on this end. 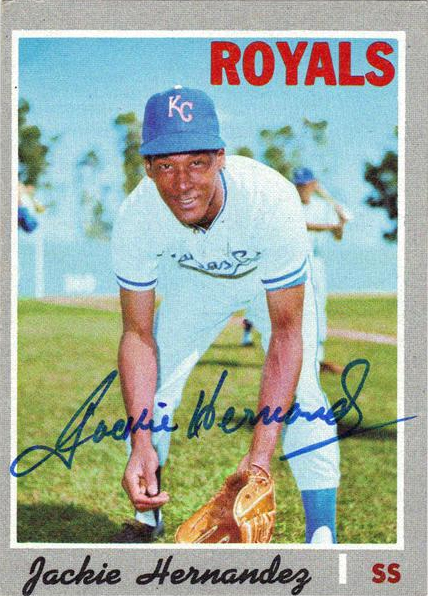 Acquired in the expansion draft, Hernandez had a rough go on the first ever Royals team. It was the only year he was an everyday player. Before the 1971 season, Hernandez was sent to Pittsburgh in a six player deal that landed the Royals Fred Patek, who held down KC’s shortstop spot for the next nine years.

Brown was the Royals’ first pick in the 1996 draft. 2001 was the only year he was given a chance at regular playing time. He’s the only non-infielder on the list.

Pena is another in the parade of failed shortstops for the Royals this millennium. The Royals gave him 287 games over three years in hopes his bat could come around just a little. The Royals gave up on him as a shortstop in 2009 and tried converting him to a pitcher in the minors before letting him go to free agency.

It feels a bit like sacrilege to include Frank on this list, but of course his greatness was defined by his defense (though he was no slouch at the plate between 1978—87).

Moving between six different defensive positions, Relaford must not have been comfortable in either half of the inning in ’04.

Howard was a longtime Royal (1991—97) but ’96 was his only year as a regular. He handled shortstop for 135 games, and apparently did well in the field (third among AL SS in total zone, fourth in range factor, and first in fielding percentage). Hitting was a different story.

Berroa joined the Royals as a part of the seven-player, three-team trade that sent Johnny Damon from KC to Oakland in 2001. He made the Royals think they may have finally found a long-term solution at shortstop when he was named Rookie of the Year in 2003. But Berroa would never find his 2003 form again, and by 2006 he seemed completely lost.

And the worst offensive season in Royals history is…

A name that will forever live in infamy for Royals fans, Perez came to the Royals in a straight-up trade for Jermaine Dye in July 2001. Dye would put up 9.4 FanGraphs Wins Above Replacement (fWAR) in his career after the trade, while Perez was worth -3.5 fWAR in one and a quarter seasons with the Royals. Trades don’t get worse than that, and seasons don’t get worse than Perez’s 2002.